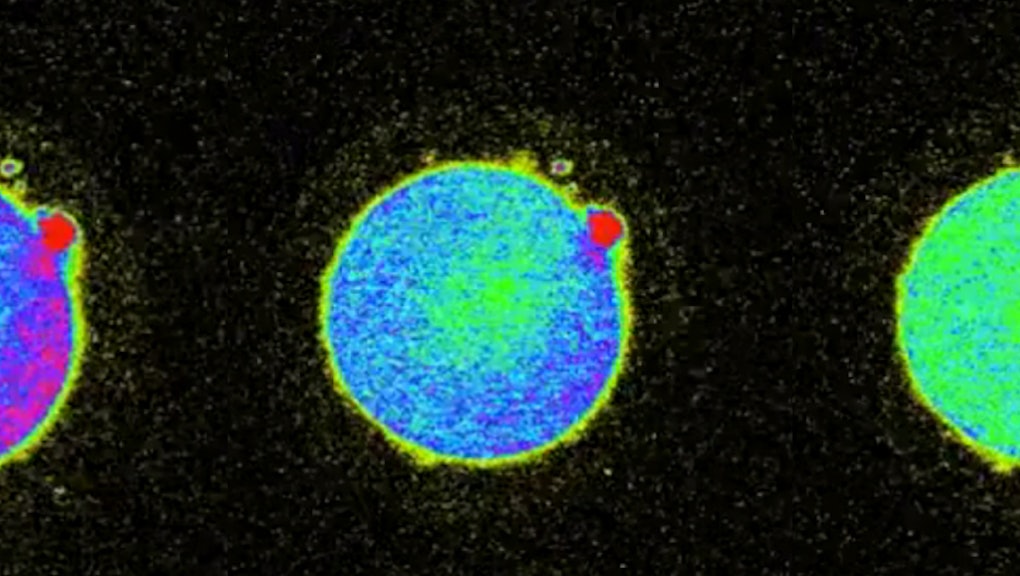 So often in romantic comedies, we see two straight people fall in love and consummate their relationship with heterosexual intercourse. What we rarely see represented, though, are the sparks that fly after sex: literally! In the woman's fallopian tube, between her egg and the dude's sperm.

Researchers at Northwestern University have released footage of the "stunning explosion of zinc fireworks [that] occurs when a human egg is activated by a sperm enzyme."

Does your sperm ever feel like a plastic bag? Baby, it's a firework.

A press release on the Northwestern University website said that this is the first time such footage has been captured. Here's why it looks all firework-y:

As the zinc is released from the egg, it binds to small molecule probes, which emit light in fluorescence microscopy experiments. Thus the rapid zinc release can be followed as a flash of light that appears as a spark.

While the explosion happens to be super-cool (and kind of soothing?) to watch on a loop in GIF form, the researchers added that monitoring the occurrence could be beneficial to the process of in vitro fertilization, or IVF. Here's what Teresa Woodruff, a gynecology professor and one of the study's senior authors, had to say:

If you can look at the zinc spark at the time of fertilization, you will know immediately which eggs are the good ones to transfer in in vitro fertilization (IVF). It's a way of sorting egg quality in a way we've never been able to assess before.

The odds of conception with the help of IVF have been known to vary dramatically (anywhere from 23% to 86%, depending on age) — so anything that increases the chances of successful conception is kind of a big deal.

But anyway, back to that sparks-flying GIF. It's v. soothing, right?

Watch the full Northwestern video below.