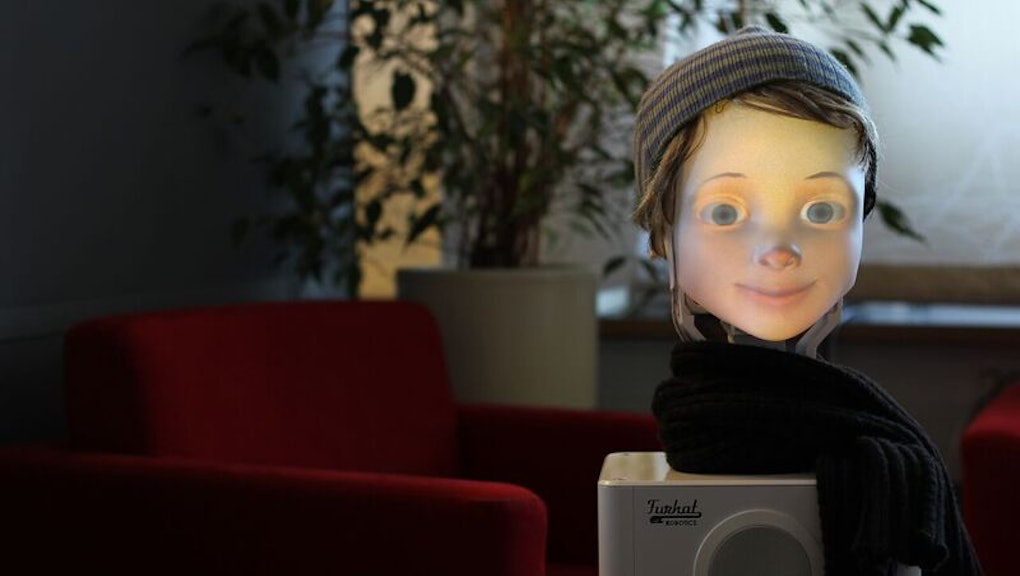 Can You Look This Robot in the Eye Without Losing Your Sh*t?

Gaze into the face of the future. I dare you.

This robot's face is so human-like, you could almost mistake it for flesh and blood. Almost.

Transcending the uncanny valley is a tricky feat, but Furhat Robotics' robot head aims to blow all other bots out of the water with its ridiculously humanlike appearance. Rather than stretch a silicone face over metal to make a machine more "human," Furhat Robotics is projecting a 3-D animation onto a face mask designed to fit the projection. A pair of servo motors in its neck and head give it the ability to move more naturally, perform gestures and address humans. It also wears a furry trapper hat or a wig to hide it's "brain."

"The uncanny valley, or what we refer to as the Zombie Effect, arises partly from when the behavior of the robot does not live up to its appearance," Furhat Robotics CEO Samer Al Moubayed said in an email. "In Furhat, since we use computer animation to render the face and its dynamics, we can benefit from the power of computer graphics and render very realistic and fine-detailed facial behavior."

Robots designed using silicone and mechatronics, like the Scarlett Johansson robot or Nadine, can be "heavy, noisy, require maintenance and are more expensive," Al Moubayed said. Furhat's face, though, can transform from man to woman to human-alien in seconds without any manual work or alterations to the hardware — changing both its appearance and its voice easily and fluidly, as is seen in this Bloomberg video. Al Moubayed called facial animation the "holy grail of animation."

As Bloomberg's Ashlee Vance points out, these Furhat robots could be the face of Amazon's Alexa or Apple's Siri in the future. I hope you're ready for a floating humanlike head on your nightstand.