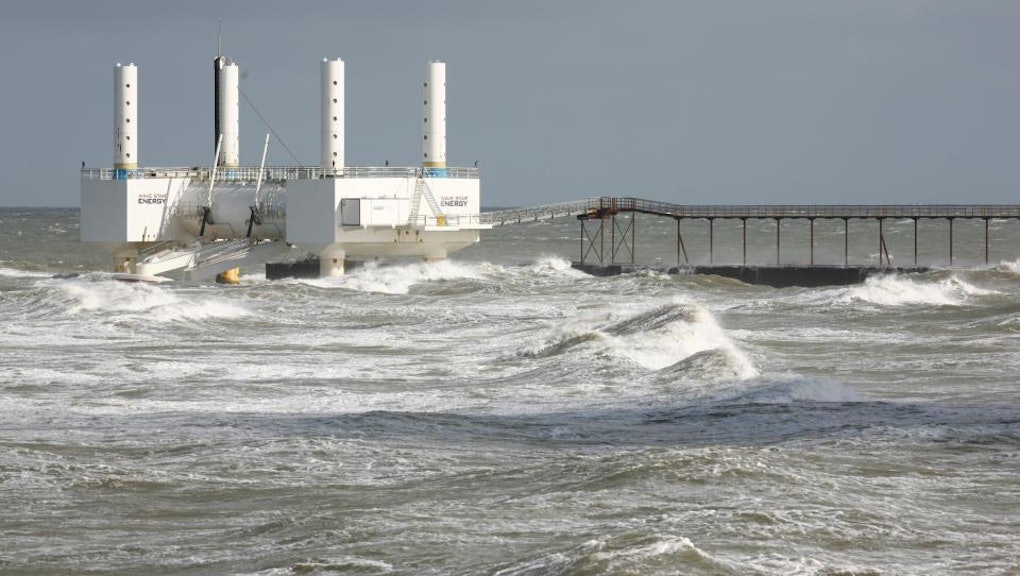 How Wave Energy Could Power Homes, Thanks to This Wavestar Sustainable Energy Machine

Harnessing the the ocean to produce usable power is the mission of alternative energy company Wavestar. The Denmark company has been working on its "big ocean" commercial 1 megawatt machine for a 2017 release, according to its website. The machine seeks to tap into the frontier of the renewable and limitless energy of wave power. The rise in development and adoption of wave power often draws comparisons to that of wind power, according to Nature.

"You could say that in the long run it's necessary that we go from fossil fuels to clean renewable energy —   it's what we have to do to help protect the environment, look after our earth and it would be good for all mankind," Wavestar co-founder Niels Hansen said in a video.

Using its 20 floaters, which bounce with the movement of waves, the 1 megawatt machine would transfer kinetic wave energy through hydraulics to turn and power a generator, according to Tidal Energy Today. One day, the goal is to increase the output of each machine to 6 megawatts, enough for one machine to power up to 4,000 homes.

The use of tidal power can be traced back to the Middle Ages, when people used the moon's power to help grind grain, according to GE Reports. One of the benefits of tidal power is the fact that it's cyclical and predictable, so people know how much power is coming and when. It's also more powerful than wind, since waves are 800 times denser than air, according to Nature.

Read more: Here's How Fossil Fuels Are Hurting the Environment and Why Renewable Energy Is the Answer

To handle the higher density of water, Wavestar's machine would also be able to seamlessly adapt to weather and wave conditions, also lifting up its floaters when it's too stormy.

While out sailing by theirs parents' beach house in 2000, Niels and Keld Hansen brainstormed the idea of harnessing wave energy, buying the rights to a machine in 2003, according to the Wavestar website. The first tank testing went underway in 2004 at Aalborg University. Since then, the company has been testing larger scales of the machine and new power take-off systems, according to Tidal Energy Today.

At the university, other energy companies, such as Wave Dragon and Seawave Slot-cone Generator, have been testing out similar wave energy projects alongside Wavestar — all with the hopes of producing a commercialized wave energy machine.