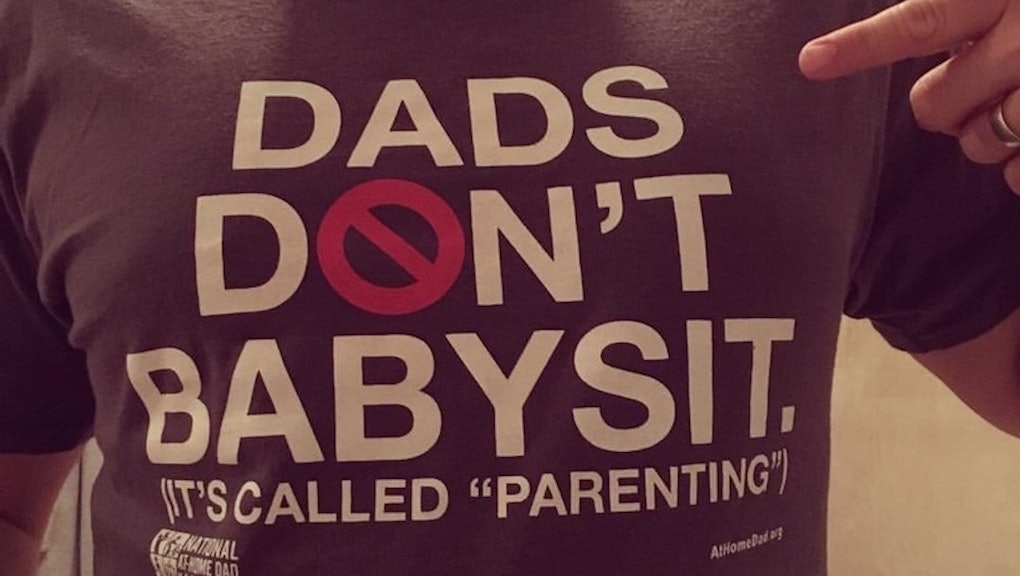 This Feminist Dad Has a Powerful Message for Fathers Everywhere

Recently, Al Ferguson posted a photo of himself on Reddit wearing a T-shirt with a message that's close to his heart. He wants the world to know that even though he's a young dad, he's not "helping out" when taking care of the kids — he's taking care of them himself.

The photo of Ferguson's T-shirt, which bears the slogan "Dads don't babysit (it's called parenting)," has gone massively viral, racking up more than 3,000 comments since it was posted on April 25.

The shirt promotes #DadsDontBabysit, a hashtag campaign launched by the National At-Home Dad Network. Ferguson is a British blogger who founded the Dad Network, an online community dedicated to exploring healthy fatherhood, two years ago. In addition to spearheading online networking and awareness-raising initiatives, the community also meets annually at a live event in London.

Hundreds of Reddit users responded to Ferguson's post with stories of their own experiences, from the patronizing things people say to stay-at-home dads to one father being dismissed and treated like "a bystander" at his hospitalized daughter's bedside.

Ferguson thinks that sexism hurts fathers and families in various subtle, insidious ways. "They [dads] can feel [like they are] the secondary parent, [and] lack confidence in themselves and their ability," Ferguson said in a Twitter direct message to Mic. They can also "feel uncomfortable signing up for classes, et cetera that are aimed at mums."

Forums like the Dad Network, Ferguson said, help all kinds of men feel welcome to explore their role in their family. "I run a private network of 3,000 dads," Ferguson said. "Many of them say it is the only place they feel comfortable to open up and share their thoughts and emotions about fatherhood. Men experience many of the same emotions, fears [and] joy of parenting as mums. Yet they can't express it in the same way without judgment."

"We have had dads who feel completely alone transform themselves and their lives through the support of the network," Ferguson said.

As a proud feminist, Ferguson thinks empowering men to realize their full capacity for nurturing is a step toward achieving gender equality.

"It's very important that dads are seen as equals when it comes to parenting," he said. "Promoting fathers is absolutely crucial in the fight for gender equality."