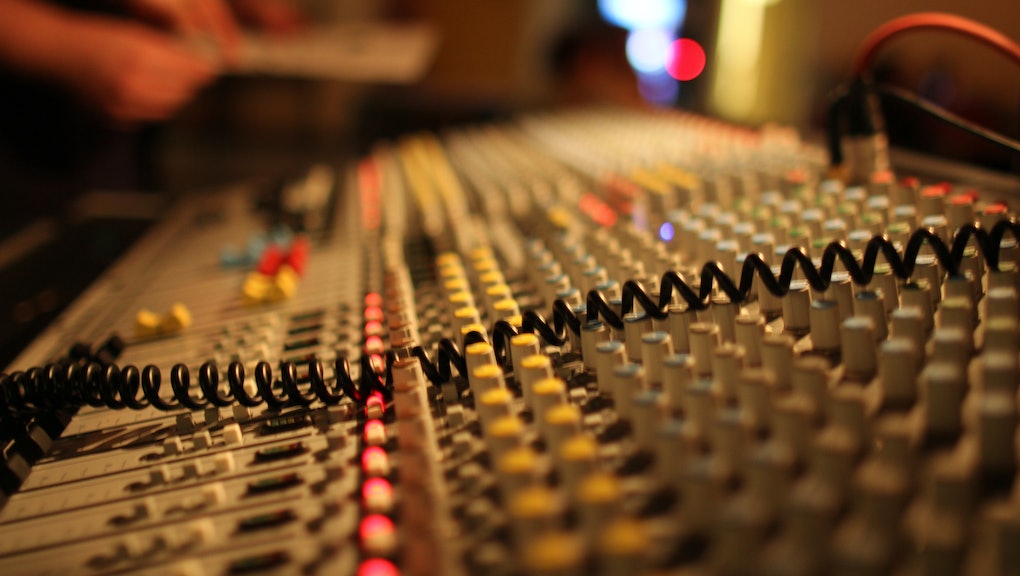 At times, the pop conversation seems dominated by its female music artists — Taylor Swift, Rihanna, Beyonce, Lady Gaga, Carly Rae Jepsen, Adele. While these names can always grab headlines, zoom out and the state of women in music is actually far bleaker.

In 2015, only around 25% of hits on the Billboard top 40 charts were sung by women, according to Fusion — and these are just at the performance level. Offstage in the production and engineering fields, the statistics are even more troubling. Only 3.2% of the producers on 2015's top 40 were women, according to Fusion. In 2015 Chicago Tribune reported that only 5% of sound engineers are women.

Read more: The Disturbing Trend in How We Talk About Female Musicians

It's a "bro society," female sound engineer Juliana Armbrust told the Tribune. This imbalance seems especially troublesome considering the recent high-profile allegations of sexual harassment and assault between female artists and male producers. Kesha's case against Dr. Luke and Grimes' experiences with harassment and objectification have highlighted some dubious power dynamics in the studio. If we could empower female producers, as publications such as Fusion have suggested, we might be able to unset these toxic inequalities in some way.

So how does one level the playing field? San Francisco-based nonprofit Women's Audio Mission thinks they've found an answer: Empower young girls by exposing them to technical side of music creation and break down the stereotypes that keep women from pursuing audio engineering.

Each year, 850 girls in schools around Oakland, California, are chosen to split their curriculum with WAM for six to 18 weeks per semester, as Winston explained in an April phone conversation. The girls cover the basics of sound engineering, such as building speakers, creating soundtracks and sounds, as well as writing scripts. Through its mission, WAM also earned itself the distinction of being the only entirely female-run recording studio in the world. In 2015 it also earned a Google RISE Award, which honors organizations that encourage women and minorities to pursue tech and computer science careers.

"I think its safe to say we've trained the largest amount of women and girls in STEM as well as audio," Winston said. This equates to more than 7,000 women and girls over the past 12 years, according to Winston. That number has grown from just 20 students per year in 2003.

The program warms middle school girls to the technical side of music by using the musical and social elements as bait. It's not long, Winston said, before girls' impressions of what a producer can and should look like change drastically.

"It's great to see them fight over who gets to assume the role of engineer in whatever project they're working on, so it's interesting to see them reclaim that term in a way that works for them as girls because when they come in I would say, 'you're going to learn how to be an engineer,' [and] they would be like, 'yuck, I don't want to be the traditional stereotype male white guy nerd,'" Winston said.

Winston attributes the disparity and misunderstanding in technical fields to a "very deep socialization" in the way girls are introduced — or not — to technology at a young age, she said.

Others, such as Susan Rogers, a former studio engineer for Prince and associate professor at the Berklee College Of Music in Boston, believe its the "lifestyle" itself is a turn-off.

"The typical lifestyle of a record producer is very intensive, very competitive, all-consuming," Rodgers told the BBC. "In order to be able to maintain that level of focus and attention and dedication to your craft, it has to come at the expense of reproduction."

"I really do think we default to an image of a guy when we think of audio engineering, when we think of studios, when we think of recording musicians," Kiran Ghandi, former drummer for M.I.A. and WAM workshop leader, said in an email exchange with Mic. "A lot of times in general it's not even gender but just [like] any kind of biases we have, they're formed based on experience. So if you're always used to seeing men doing a certain job you're always going to think that men are better at it because they're the only ones doing it."

To Ghandi, a studio filled with more women is a "psychological relief," compared with the traditional male-filled studios. Up-and-coming R&B artist Bosco offered a similar take during an interview with Mic in April. She asserted that working with a female producer, the Atlanta-based Speakerfoxxx, helped her access "certain things I've been wanting to say lyrically that I didn't necessarily feel the most comfortable with male energy."

Perhaps its the wide success of WAM or the relative lack of fellow organizations addressing this gender gap, but WAM is suffering from an overflow of potential students. Just last year they had to turn away about 300 girls. The organization is in the process of raising $2 million for its recent studio purchase and to hire more teachers, Winston said.

Slowly, more resources such as female:pressure, a Tumblr project highlighting aspiring female producers, are beginning to arise, according to LA Weekly. Still, Winston assured that this issue she and others are tackling is "not for the faint of heart." That doesn't mean it's any less necessary.