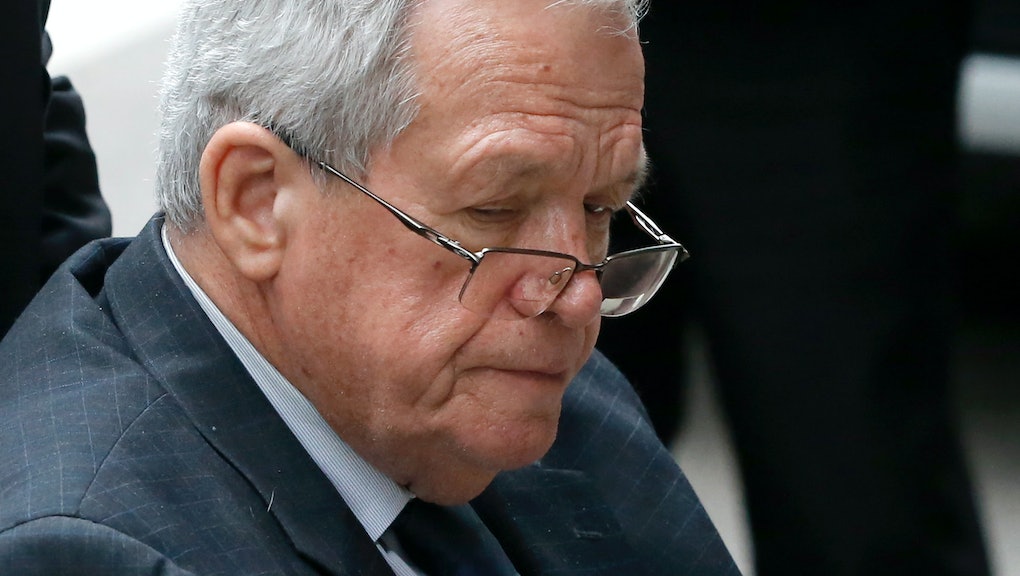 The Worst of Dennis Hastert

Former House Speaker Dennis Hastert, 74, was sentenced Wednesday to 15 months in prison. The charge: failure to report the over $10,000 in cash he'd withdrawn as hush money, an offense to which he pleaded guilty. The real crime: his molestation of at least four boys during his career as a high school wrestling coach, one of whom was the recipient of said hush money.

While some 60 individuals wrote to the presiding judge, Thomas M. Durkin, to defend Hastert's honor, Hastert's legacy was often less than honorable.

Dennis Hastert kept a "homosexuals" file during his time as a legislator.

According to Politico, whose reporters unearthed records during a recent dive into Hastert's archives at Wheaton College's Billy Graham Center, the file was "filled with policy statements from social conservative groups" and clippings detailing the alleged evils of homosexuality.

That probably came in handy during his congressional campaign against LGBTQ individuals.

During his tenure as House speaker, only bills already backed by "the majority of the majority" — which is to say, Republicans — received a vote.

But even before all that, he was fighting the good fight against pedophiles.

As Politico reported, Hastert "spearheaded legislation" to keep the internet free of predators looking for underage victims before his 1999 appointment to speaker.

"We must continue to be proactive warding off pedophiles and other creeps who want to take advantage of our children," he reportedly said in an online forum.

In 2003, three years after supporting the Child Abuse Prevention and Enforcement Act, he said that we should "put repeat child molesters into jail for the rest of their lives."

Among the children Hastert molested was the brother of a close "political ally."

That victim's name is Scott Cross, brother to former Illinois House Republican leader Tom Cross, who "considered Hastert a political mentor," according to the Chicago Tribune.

A champion of family values, Hastert also pushed for the impeachment of Bill Clinton in the wake of the Monica Lewinsky scandal.

Because Clinton had "abused the powers of his office in an attempt to cover up his wrongdoing," Hastert said, his "conscience" bound him to vote for impeachment, based on the "president's inability to abide by the law."

If Hastert were anyone else right now, one wonders what he'd say to and about a convicted "serial child molester."

Read more: The Dennis Hastert Scandal Has Outed the Hypocrisy of Republican Leadership