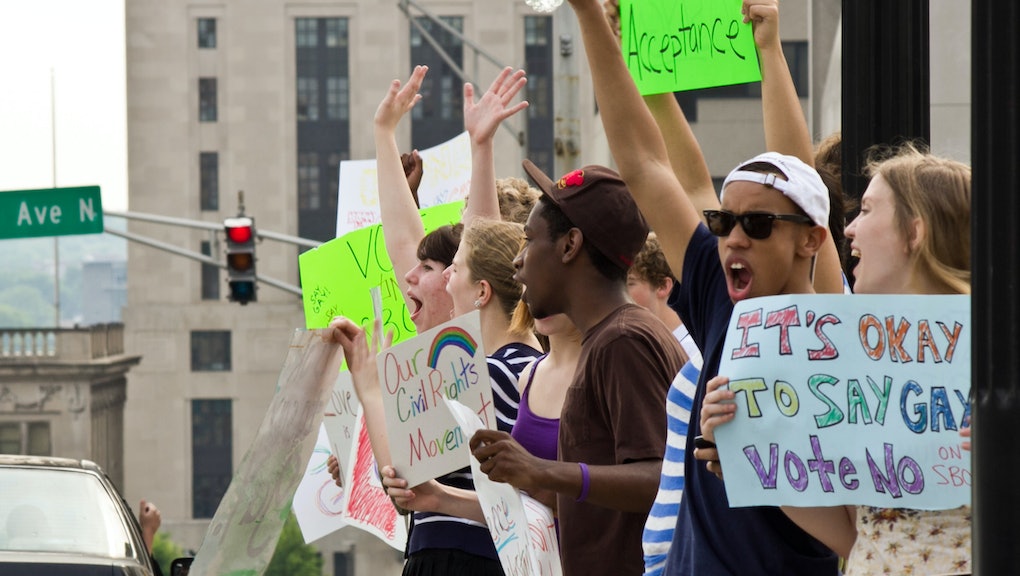 What the Hell Is Going On in Tennessee?

Last week, the state's legislature passed a bill that, if signed, would strip the diversity office at the University of Tennessee of $436,700, and refuse funding for on-campus initiatives promoting the use of gender-neutral pronouns. Unfortunately, the vote isn't the first time in the state's recent history that lawmakers' decisions have left human rights and advocacy groups scratching their heads.

In the past few years alone, Tennessee's politicians have proposed some of the most egregious bills seen anywhere in the United States.

The bill to defund diversity initiatives at UT? It would also eliminate resources for groups seeking to inhibit religious celebrations and sexuality seminars.

And what's worse is where the money's being reallocated: If approved, 25% of the proposed budget, or $109,175, would go to the school design program and print shop, for the sole purpose of creating and distributing decals that read, "In God we trust" for police vehicles.

Earlier this month, a law to make the state's official book the Bible nearly passed in early April, but was ultimately vetoed.

Legislators came this close to minimizing the separation between church and state in Tennessee, but Haslam eventually rejected the bill. Apparently he wasn't buying Sen. Steve Southerland's argument that the Bible "is a history book."

In 2014, Tennessee became the first state to jail mothers whose babies were determined to have suffered "harm" during pregnancy as a result of illegal drug use.

Amid an outpouring of concern amongst experts that poor mothers and women of color would be disproportionately targeted by the measure, Haslam signed the bill into law in 2014.

The measure was briefly revived in 2013, but lawmakers failed to pass the measure both times it was introduced.

Being staunchly anti-abortion didn't stop Congressman Scott DesJarlais from pressuring his mistress to have one in 2000.

The Tea Party-backed Tennessee Republican and former doctor admitted in court to pressuring a 24-year old patient with whom he had an affair into terminating her pregnancy. His wife, Susan DesJarlais, renewed their divorce proceedings in 2001. DesJarlais won reelection in November 2014.

Read more: A Dangerous Anti-Gay Practice Is Still Legal in 48 States — But Not For Long