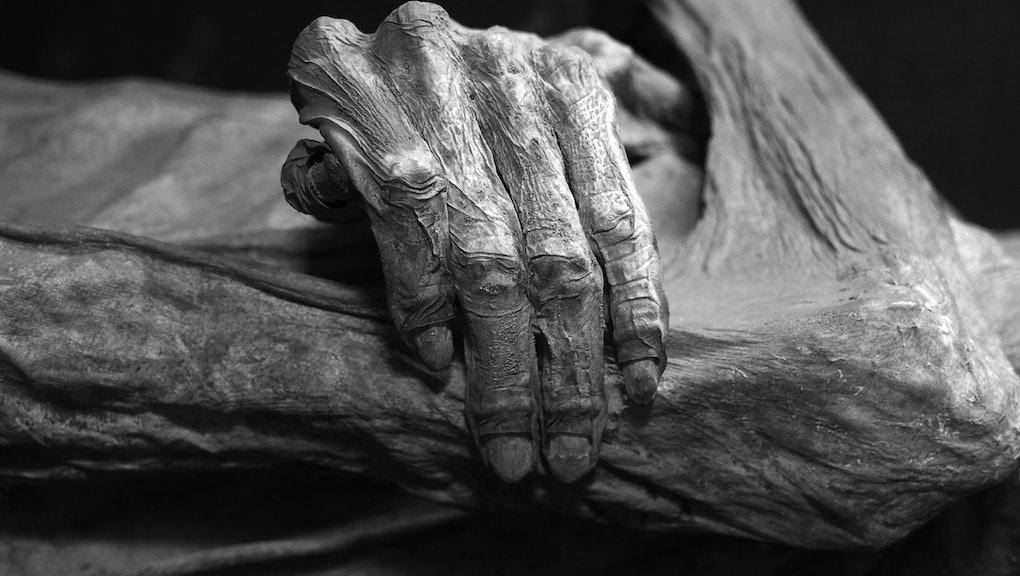 If Your Body Were Cryopreserved, What Would It Feel Like to Wake Up 50 Years Later?

I've been following a French TV series about time-traveling zombies. The gist: People who died in an alpine town came back days, years, decades later, to confused and distressed family members. As much as this sounds like a story about the supernatural, it could very well be a story about science.

After all, the people involved in cryonics — the process that involves cryogenically preserving your body for future reanimation — are mulling over very similar scenarios: What would life be like for reawakened people plucked out of time?

Today, you can arrange to be cryogenically preserved after you're declared legally dead. You can already throw anywhere from $28,000 to $200,000 for your entire body — and this is something people have been doing since the '60s.

The problem is no one's managed to successfully revive humans from that state.

We're getting close, though: A rabbit brain was successfully cryopreserved at minus 135 degrees Celsius. Cryogenically frozen worms were brought back with their memories intact. So there's at least a smidge of hope that one day, reanimation can be brought up to human scale.

For those who make it, here's what you can expect after waking from your cold slumber.

Your tissues and organs will probably be fine. Or totally poisoned. It's a misconception to say your body's "frozen," because ice crystals damage tissue. Instead, cryonicists replace your blood with what's essentially a biological antifreeze, which prevents lethal crystallization. This process is known as "vitrification." There's one problem: The solution is slightly toxic at room temperature.

"The freezing process itself causes some damage, but it's the only process known to man at this point that also preserves the tissues and structures," Dennis Kowalski, president of the Cryonics Institute, said in a phone interview.

There's progress being made on organ integrity: Researchers have already vitrified, thawed out and transplanted kidneys in rabbits that ended up functioning.

"But the real million-dollar question is this: Are your nerves, synapses, everything that makes your mind — is the integrity of that still there after the cryonics process?" Kowalski said.

Chances are you won't be thawed out prematurely. Because in the best-case scenario...

Health care will be where it needs to be. As the BBC noted on the fallout following successful cryonics, health care in the future could be worlds away from what we have now. This means that for certain patients, like 2-year-old Matheryn Naovaratpong, who had an inoperable tumor in 2014, there's hope in being cryopreserved indefinitely until medical advancements are far along enough to cure her.

Since we have no solid way of predicting when that'll be, there are systems in place to allow bodies to stay in storage for as long as they need. At the Alcor Institute, the Scottsdale, Arizona-based life-extension foundation where Naovaratpong's body is stored, the cost of storing and maintaining patients is shared among a $8.7 million trust, 62% to 70% of which comes from the patient's family upon admission. It's not clear if that will still be there in 30 or 40 years, but given its mostly positive five-year track record, it doesn't look like Alcor's in any danger of running out of trust money anytime soon.

There could be other means of life extension beyond cryonics. For some transhumanists — members of a movement dedicated to life extension and human augmentation — cryonics isn't the most viable option. Anders Sandberg, a transhumanist and researcher at Oxford University, wrote in a blog post that to him, cryonics has 10% likelihood of working out — enough for him to express interest in it, but not enough for him to pin his life savings on. He expresses doubts that it'll truly pick up, having stayed firmly in a niche for its 50-year history.

There could be other options available on your quest for immortality. Perhaps we'll be able to upload our minds to non-biological avatars, says a Russian millionaire. Perhaps we'll gene edit our way out of sickness and old age. Or, you might see your family again — with their minds uploaded to robot clones.

The future won't be that hard to adjust to. If you think about how differently we're living now compared to the 1950s, the technological advances we'll see in 2050 or even 2100 might be unfathomable. But, according to Ole Martin Moen, a researcher at the University of Oslo, it might actually be pretty easy to adjust.

"I don't think post-cryonic adjustment will be more troubling than immigration from, say, Africa to America today — and certainly not more troubling than the decade and a half it presently takes for a newborn child to adjust to society," he said in an email.

Or, cryonics could just radically fuck your body up and totally leave you stranded in an unfamiliar and strange future. Moen says as much in his paper published in the Journal for Medical Ethics.

"Reanimated people might have old and deteriorated bodies, be left without friends and family, feel alienated in a radically transformed society, and find that their work skills are dated," he wrote.

This sounds pretty similar to real-life ex-convicts who've been incarcerated since before the internet existed — the web felt like sci-fi to them. There's certainly a chance the future won't end up being a dystopia straight out of Black Mirror. But if there's anything that people who've been disconnected for their entire lives can tell us, it's that humans are truly adaptable. And while a future 50 years from now might look alien to someone suddenly thrust into it, it won't stay that way for too long.