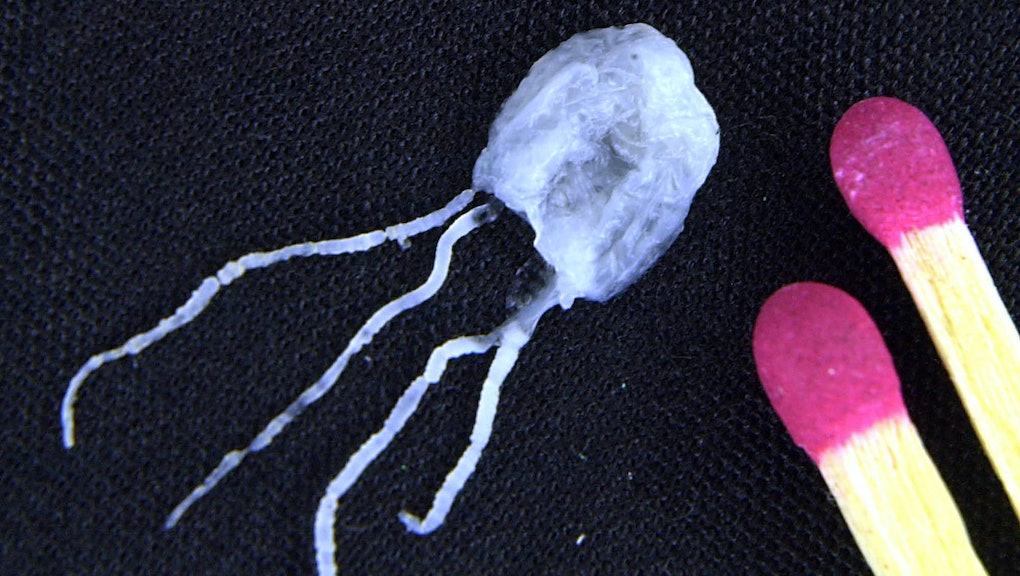 Size really doesn't matter, after all — at least in the non-human animal kingdom. Tiny creatures may be more dangerous than the world's top predators, especially if they're difficult to spot. Case in point: the Irukandji jellyfish, which isn't even one inch long but induces disproportionate pain in the people it stings, the Science of Us reported. Unfortunately for beachgoers, especially Down Under, 2016's record high temperatures and powerful El Niño might create an ideal ocean climate for this sneaky little monster.

"It gives you a feeling of impending doom," Laura Gershwin, an Australian biologist, told ABC in 2007, the same year she published a paper detailing the deadly particularities of the jellyfish's venom delivery mechanism. "Patients believe they're going to die and they're so certain of it that they'll actually beg their doctors to kill them just to get it over with. And all of this from this little tiny jellyfish."

Symptoms of Irukandji sydrome, Gershwin said, are intense and targeted lower back pain; about half a day's worth of constant vomiting; "full body cramps"; buckets of sweat; extreme shortness of breath; and excruciating, involuntary motion.

As Scientific American reported, Gershwin's paper pointed to a new variety of Irukandji, a tiny terror she named Malo kingi. The species name commemorates a researcher — Robert King — who died from an Irukandji sting in 2002. That year, the population of these jellyfish, nicknamed "the common kingslayer," swimming off Australia's northern coasts ballooned, according to Scientific American: Between Dec. 2001 and Jan. 2002, 80 patients suffering Irukandji syndrome were admitted to one Australian hospital, whereas 30 people are hospitalized on average during a typical holiday season from November to May.

January 2016 saw another uptick in Irukandji stings. In the first week of the year, six cases were reported in Queensland, Australia, as "northerly winds created 'perfect conditions'" for the marine monsters. Similar winds, we should note, were thought to be the cause of the 2002 Irukandji explosion. Warmer waters are apparently prompting the jellyfish to migrate south — and according to Gershwin, they inhabit "all the usable oceans of the world."

Have fun at the beach this summer, everyone.

Read more: A Prehistoric Spider Creature Was Just Found — And It's Coming to a Nightmare Near You