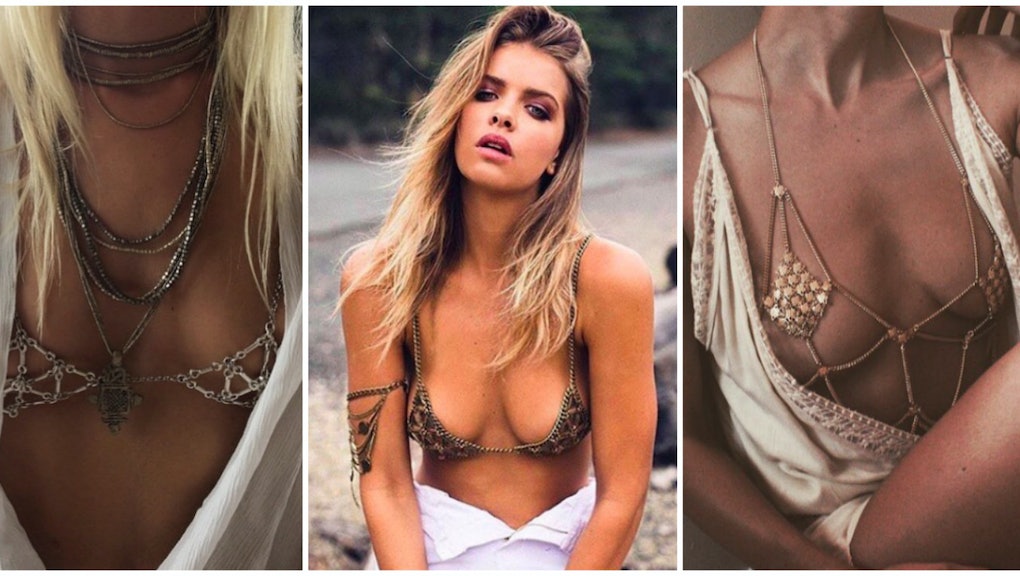 For women like Kim Kardashian West, gaffer tape will do. For women like Kendall Jenner, bralettes are the only way to go. And now, for the most daring among us, wearing chains that construct the very basic silhouette of a bra, with metal appliqués sometimes covering the nipples, is completely OK.

But here's the thing: That's not a fucking bra.

Bras are supposed to be supportive. They're supposed to cover your nipples and part of the area surrounding them for support and warmth and general security purposes. Chain bras, as they're now known, do none of the above.

That all could have to do with the fact that they erupted in popularity during a particularly traumatizing time: Coachella. In the California desert, when flash tattoos and feather hair ornaments seem like a good idea, girls basked in the sun wearing tank-tops with chains peeking out, or in pools, hoping not to show signs of rust.

We can blame Bella Hadid specifically for making this statement a verified trend in the Golden State. Over a Coachella weekend, she posted an Instagram of herself wearing a choker with her heavily wristbanded arms waving in the air, her breasts completely unsupported by some weak metal chains. To Hadid's 4.1 million followers, this was #goals.

With that pic, a trend was born, and now we must live with it — but not without a fight.

Head on over to Instagram and you will see the aftershocks of Hadid's first post. In just the past few weeks, more than 1,000 pictures have been tagged #ChainBra, and every one gives us a new reason for why they are inherently evil. Here's just a few instances:

2. This will pinch your nipples and cause you to bleed.

4. If there is a sudden gust of wind, you will get arrested.

5. There is no support in this situation.

6. If this gets sandy, it will be impossible to clean.

7. Basically only hot people can wear this.

And we have some news for you: We are not all models in a Free People catalogue. Not all of us awaken from a midday nap with beachy waves and perfect tits. Not all of us want to use a fucking necklace as a support for our breasts.

For whatever awful reasons, no new or exciting bra trend — from triangle bras to bralettes — seems to work for (or can even be replicated for) people with larger breasts, or those who feel better with a little support. Especially since the chain bra is realistically just a marriage between a body chain and a bralette, we can tell you that the only person who will ever be able to completely and fully pull off this look is someone like Jennifer Lopez. And sadly, we all cannot be her.

Where we can lay blame for this trend is not only on Hadid, but on social media's pull. Hadid has over four million impressionable followers, and if the rise of Kendall Jenner's favorite undergarments (bralettes) tells us anything, that matters. The type of clothes we're forced to wade through on our Instagram feeds, which will eventually land on racks at Urban Outfitters, are being perpetuated by supermodels. And that feeds trends which will work on supermodel bodies and supermodel bodies alone. This isn't a trend that, say, Kim Kardashian West can pull off. And with the average American woman's bra size now at a 34DD, that's leaving millions of people out of the loop.

So, there are bras, and then there are chain bras. Let us not confuse the two.