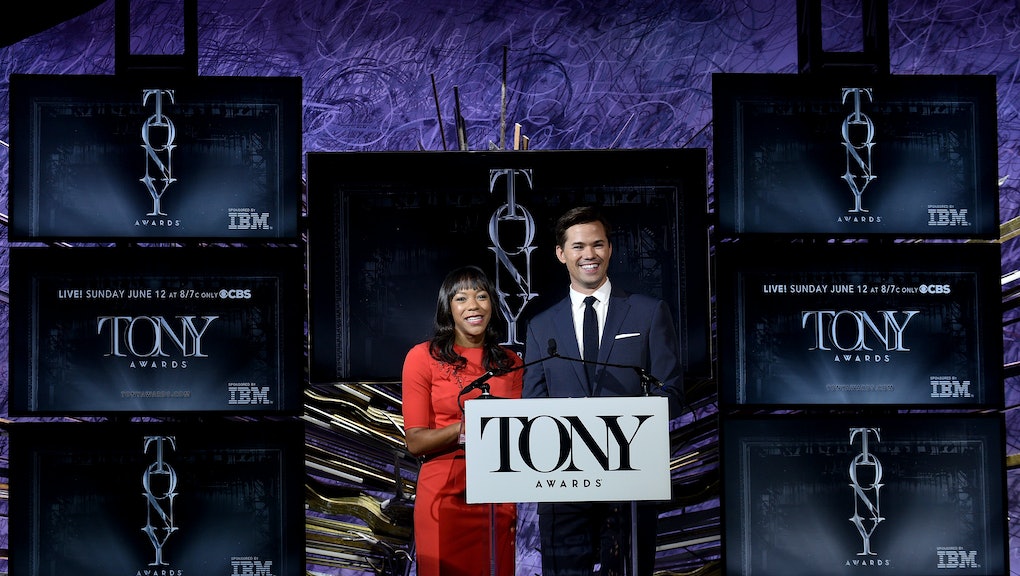 In the Wake of #OscarsSoWhite, the Tonys Just Proved Themselves So Diverse

Mere months after #OscarsSoWhite the Sequel struck Hollywood, the Broadway community has put itself back in the conversation with a Tony nominee slate worth celebrating.

Of the 40 acting nominees for the 2016 Tony Awards, 14 are nonwhite — making up over 30% of the nominee pool. Twelve of those nominees are black, thanks to an assortment of shows with predominantly black casts this year including the revival of The Color Purple and the Audra McDonald-starring Shuffle Along.

While it's true that in the past, the Tonys have been as monochrome as the Oscars, this year was a surprisingly diverse one for the Great White Way. Hamilton set the tone when it opened in August, presenting a story in which people historically portrayed as white were played by nonwhite actors.

Unsurprisingly, Hamilton also earned a best musical nomination — one it will almost certainly win come June 12. Hamilton also broke the record for most number of nominations for a single show with 16.

Of the four categories that correlate to the Oscars' best picture award (best play, musical, revival of a play and revival of a musical), four included predominantly nonwhite casts: Hamilton, The Color Purple, Shuffle Along and the Lupita Nyong'o-starring play Eclipsed. Additionally, one nominee from the best revival of a musical category — the revival of Spring Awakening — featured multiple deaf cast members among its ensemble.

Before the nominations, the New York Times noted the probability the Tony nominees would be a remarkably diverse set. There were actually even more shows and performers that could have earned recognition, including the Gloria Estefan musical On Your Feet! and Allegiance, a musical about Japanese internment camps.

Indeed, the lack of representation of Asian and Hispanic actors beyond Hamilton's Miranda and Soo affirms what Asian American Performers Action Coalition spokesman Pun Bandhu said in the New York Times piece: These actors and stories are still being undervalued, even in a banner year for theater diversity.

"We still have a lot of work to do in terms of the diversity of our creative teams, and I'd like to see more diversity among our producing community," said theater owner Jordan Roth to the Times.

A cynical awards-watcher could look at the numbers and see not hope, but coincidence. As the Times piece notes, it wasn't as if producers gathered together and decided as a collective to make this the most diverse Broadway season in recent memory — and next season only has one planned show with a nonwhite cast on the books so far (Motown, a production that already played Broadway in 2013 and thus will not be eligible for Tonys next year).

But Tuesday morning, there was enthusiasm that indeed, the Tonys were #SoDiverse.

Call it change, call it circumstance: For this year, actors of color have been and will be recognized. After exactly zero film actors of color could get the Oscars' attention earlier, 14 feels pretty extraordinary. Here's hoping it's a sign that one day, such a nomination pool will be completely ordinary instead.