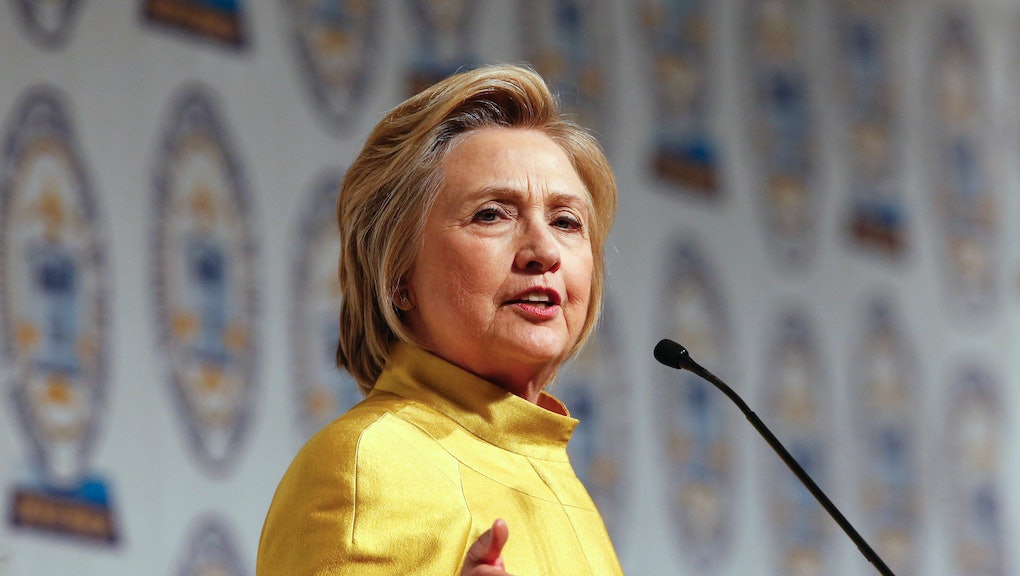 Note to Trump: "Off the Reservation" Isn't Offensive to Men

Donald Trump whined his way into headlines this weekend when he complained that Hillary Clinton's comments about men demeaning women were themselves, in fact, "demeaning to men."

"I have a lot of experience with men who sometimes go off the reservation in the way they behave and how they speak," Clinton told CNN on Friday, referencing Trump's frequent attacks against her. Trump has started derisively referring to Clinton as "Crooked Hillary," much like his coining of the nicknames "Lyin' Ted Cruz" and "Little Marco" Rubio.

"That's a very demeaning remark to men in my opinion," Trump told FOX and Friends.

In reality, men aren't the ones who should be offended by Clinton's comments; Native Americans should.

Clinton's comments provoked the ire of Native American internet users with the phrase — "off the reservation," which is widely considered derogatory. Folks on Twitter were quick to make their feelings known:

The expression "off the reservation" originated in the mid-19th century as a way to describe Native Americans who were not contained by, or under the control of, the U.S. government.

"No Indians are off the reservation without authority. All my Indians are loyal and peaceable, and doing well," wrote one government agent from Oregon in 1878, according to the Baltimore Sun; this appears to be the first documented use of the phrase.

The term evolved in the 1910s and '20s into a metaphor to describe someone who had lost his or her way, or gone rogue.

It's not necessarily the most offensive thing one might say to a Native American, but the phrase's casual use paves the way for more offensive terms.

"To me, there are indeed many more offensive words involving American Indians than this phrase," Rob Capriccioso of Indian Country Today Media Network wrote to NPR. "But I believe it is the common use of phrases like 'off the reservation' that allows people to end up being comfortable going further — to the point of using a slur to name a football team that supposedly honors Indians, but not realizing that it is actually a slur."

Trump might have missed the point, but Clinton's national political director, Amanda Renteria, tweeted a two-part apology on behalf of her boss:

Hillary Clinton's misstep underscores how she and her fellow candidates have — or rather, have not — addressed indigenous issues.

While none of the Republican candidates have even hinted at the existence of Native Americans in their campaign platforms, Clinton does mention America's indigenous people in the racial justice platform on her website — though only twice.

"Native Americans are incarcerated at a rate 38 percent higher than the national average," one section of her campaign's Racial Justice platform reads. "Her plan includes $20 billion to create youth jobs, particularly for African American, Native American and Latino youth," another section reads.

Only one candidate from either side has taken Native issues seriously enough to construct an entire platform around them. That would be Vermont Sen. Bernie Sanders, whose hopes of becoming the Democratic nominee for president seem all but dashed in light of Clinton's massive delegate lead in the primaries.

In a section titled "Empowering Tribal Nations," Sanders' website outlines a 12-part plan for improving the lives of Native Americans. These include providing federal protection against outside development for sacred tribal lands and implementing more "listening sessions" for tribes to interface with the federal government.

This broader silence around indigenous issues is telling, both in terms of how important they seem to presidential candidates and, more broadly, whether they or the history informing them are on politicians' radar at all. No word yet on whether Clinton thinks Sander should've stayed on or off "the reservation."