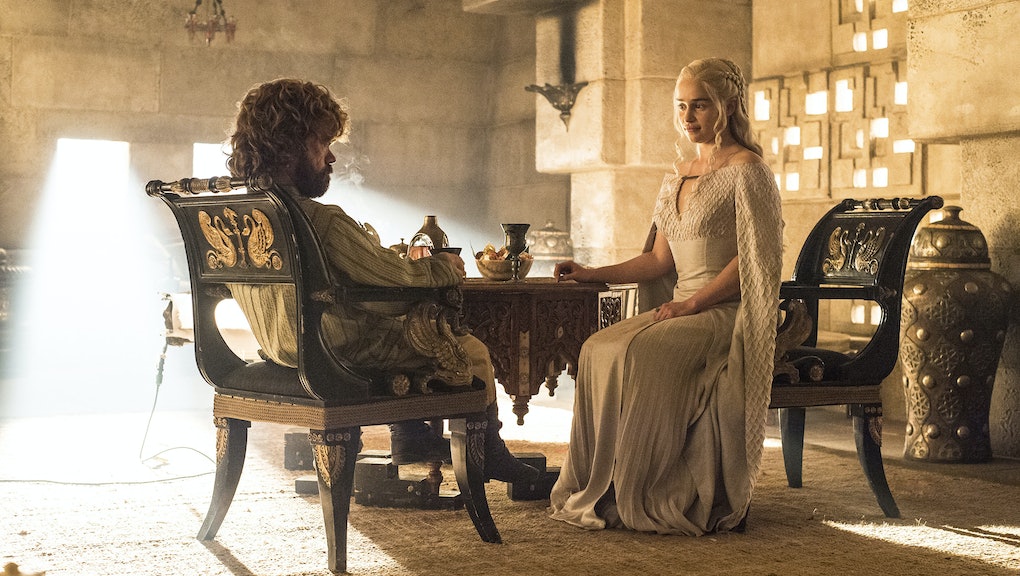 The 'Game of Thrones' Final Season Will Come and Go — But Will Fans Like the Ending?

Few TV fans have a passionate investment in their series as those who follow HBO's Game of Thrones, a show that spans six seasons of constant political struggles and relentless wartime violence. What may be a tough pill for fans to swallow is the inevitable truth that all of it will eventually come to an end — but what end is that, anyways?

Game of Thrones and the A Song of Ice and Fire novels by George R.R. Martin don't have a specific linear trajectory in the shape of other modern shows (think: Breaking Bad or Mad Men). Characters are dispersed across an elaborate network of storylines, sub-storylines, plots and subplots, not to mention there are multiple Walter Whites and Don Drapers for fans to get attached to, not just one. As such, what kind of end befits Game of Thrones? Perhaps one that's, in Martin's words, "bittersweet."

"Myself, I'm attracted to the bittersweet ending," Martin said, during a discussion at Northwestern University in 2015, according to Variety. "People ask me how Game of Thrones is gonna end, and I'm not gonna tell them ... but I always say to expect something bittersweet in the end."

Read more: "Game of Thrones" Will No Longer Follow the Books, So It Must Curb Its Sexual Violence

When the series shutters, perhaps in as little as two years, the onus will be on Martin and HBO to produce an ending fit for a show that consistently subverts viewers' expectations, whether through repeatedly killing its protagonists or the gnawing dread of characters concerned with middling politics, rather than the omnipresent threat ready to wipe out humanity. Martin has said he draws a lot of his fantasy influence from J.R.R. Tolkien, but Tolkien's Lord of the Rings narrative still followed a somewhat linear path: destroying the ring.

That isn't to suggest that fans don't have their own ideas as to how the series will conclude. There are some who theorize a great, climactic battle will occur between the White Walkers and the dragons (the titular ice and fire, coming together). After this war, presumably with the dragons succeeding, there's a period of peace.

Even if this were the case — and the world fell into peace — what Martin has established is that the concept of finality and closure just doesn't apply to the world of Westeros. Rather, the history has consistently shown through its annals that the political game continues to be played.

When the First Men and the Children of the Forest come to a peaceful living resolution and period of prosperity called the Pact, they are first attacked by the White Walkers, leading to the creation of the Wall. Then, they have to deal with the Andal invasion of Westeros from across the Narrow Sea.

Shortly after King Jaehaerys Targaryen passed away after a peaceful rule of over 50 years, the seeds are planted for a bloody civil war between the Targaryen's over who would rule the realm when his son Viserys similarly perishes. This brief, but violent period of war, the Dance of Dragons, leads to a widespread loss of Targaryen life, along with the dragons.

Most recently, heading into the series' initial turning points, King Robert Baratheon's death is conspired by a myriad of characters, including his wife Cersei.

The theme shared here by Martin has a particular resonance, and it's easy to infer: Vying for ascension in Westeros will occur, and it can take many forms — heck, even the form of ice zombies. But the ending will never truly be finite.

Now, the particular storylines of Game of Thrones should be resolved, as per Martin's "bittersweet" anecdote. Perhaps Daenerys Targaryen will rule Westeros, or maybe it will be another potential suitor. But the story doesn't open and close with what we see on screen, or on the pages.

This fully imagined world puts Game of Thrones as a stark contrast to other television series, even the successful ones. Breaking Bad is one of the best shows in modern television history, but it is ultimately predicated around the mortality of its protagonist-turned-antagonist Walter White. When he dies at the end of the series, the viewer is left with a sense of finality rarely provided to such dramas.

"Perhaps the best thing about the finale of Breaking Bad is that it actually ended," Alessandra Stanley wrote for the New York Times. "So many shows, notably The Sopranos and Lost, have gone dark without anything approaching finality. Here, the writers were so determined to not leave unfinished business that the last episode was called 'Felina,' an anagram of finale. And almost every loose end was tied."

Conversely, Westeros, as Martin has created it, is its own world with distinct features. The weather — summer and winter — go on for an indeterminate length. Houses can rise and fall swiftly (just ask House Reyne, the victims of the Rains of Castamere). Dragons and sorcery can appear in droves. There are tens of thousands of years of history; it's more than just one, overarching story.

What Martin has established is that the game will always be played — or as Daenerys puts it, the wheel will keep spinning — which means the series might draw its own conclusions, but we're not going to break the wheel just by turning away.