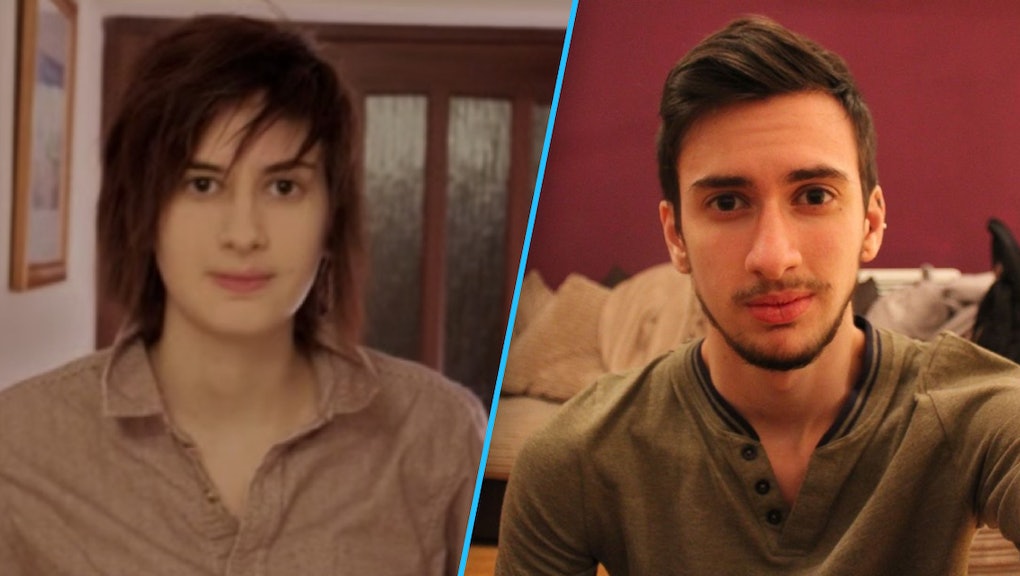 It's not hard to see that trans identities have caught mainstream attention. Some might even argue that trans people are #trending. And while culturally we're more aware than ever before of the stories of transgender individuals around the world, our cultural dialogue about trans people is still centered mainly on their bodies.

Socially, our focus on trans people seems consumed with the idea that the most interesting thing about them is their transition. There are a seemingly endless number of YouTube transition videos, which chronicle the physical transformation of trans folks through rapid photo slideshows and videos (a search with the terms "transgender" and "transition" on YouTube has 175,000 results).

The most popular have millions of views and thousands of comments. MTF (male-to-female) and FTM (female-to-male) bodies are equally on display, with some videos covering a timespan as long as two years.

The transformations in these videos are incredible and inspiring. Breasts bud and swell or disappear entirely. Faces soften, harden, hair is shaved and grown, dyed and lasered off. The people in these videos often start nervous but excited, and end up joyful. They've finally achieved what's supposed to be the endgame for trans people, according to cis heteronormative society: "full" transition. They pass.

And that's the reason why these videos could be dangerous to the way our society is engaging with trans people. Binary trans people, those who adhere to culturally accepted ideas of gender presentation, are not given value by cisgender people, unless they "pass" as one of them. "That is disgusting," says Rhyan Hamilton, a writer and advocate who identifies as a transfeminine "demigirl." "Our existence is constantly compared to that of a cisgender one."

Maybe that's why transition videos are becoming so popular: not only because they chronicle a person achieving a radical act of self actualization, but also because they turn the trans experience into one cis people can understand through the lens of their limited worldview. With each second of a YouTube video, the person in front of the camera comes closer and closer to a presentation that's considered "normal."

"We may be allowed to use the restroom to urinate or defecate if we fit the archetypical traits of the hypermasculine and hyperfeminine, but we're damned if we present as somewhere in between or if we're 'clockable,'" Hamilton said. "The notion of passing is such that it reinforces arbitrary ideals of sexed biology that have no merit or bearing when we actually look at what makes a man or a woman.

"Gender is performative as much as it is valid. And that goes for cisgender people too. That's something they can't seem to wrap their heads around."

Read more: Why Makeup Matters to Transgender People — and How the Internet Is Helping

YouTube transition videos celebrate transition, and give trans people everywhere hope that it does get better. Presentation is such a huge issue for trans folks, and the main source of dysphoria for most of them. But these videos also help to reinforce destructive structural notions of what men and women are "supposed" to look like and subtly remind trans individuals that if they're not actively trying to gain passibility, they're living even further outside the social structure.

As one of the internet's most useful and influential platforms, YouTube provides visibility and access for transgender people, but that needs to come with a social responsibility.

As one of the internet's most useful and influential platforms, YouTube provides visibility and access for transgender people, but that needs to come with a social responsibility. Transition videos are important as a way to share personal stories and share hope for those coming to terms with their gender identity, but many YouTube videos, along with most coverage of trans people in the media, help to sensationalize the trans experience.

This is not to say we should be policing how trans people share their transitions. As a trans woman, I would never tell someone else how they should experience their journey. But we can be critical of what we consume and how we react to it, and we can certainly be critical of how the media portrays trans individuals and demand that they stop sensationalizing our bodies and portraying us as sex workers, martyrs and cross dressers.

There is nothing wrong with sex work, it's valid and it's important, but we need to stop pigeon-holing all trans people into one particular narrative. We are a diverse community. We come in all shapes and sizes and colors and ages and we all have different experiences.

What most people don't think about when they're watching a trans girl show off her developing chest on YouTube is that in our country and around the world, being trans is not just different, but dangerous. According to Planet Transgender, a transgender person is killed every 29 hours. "But the media doesn't care about these issues," Hamilton says. "They care about what's between our legs."

And "passing" is important to so many trans folks not only because of aesthetic concerns, but very real safety ones. Being "clockable" is still dangerous in 2016, as New York City trans woman Pearl, who proved this week when she shared a video of her verbal and physical harassment on a crowded subway car.

"That's just a really small thing that I face every day. I go to a job interview, they look at me like, 'You're never going to get a job,'" Pearl told Mic on Wednesday. "They never even waste your time asking anything about you when you look feminine."

That makes the issue of passing and YouTube transition videos incredibly complicated, as complicated as any issue involving trans folks invariably is.

So how do we applaud trans people for their journeys while still being critical of a society that overvalues presentation and enforces rigid gender codes? "We need transattracted cisgender people to stand up and tell other cisgender people we are valid and beautiful," Hamilton said. "We need to be able to use bathrooms and we need to be able to get jobs. We need fundamental rights."

So by all means, watch as many transition videos as you can on YouTube. Share them on Facebook while you watch another episode of I Am Cait. But maybe interact with a real live trans person and see them for the fully realized, complicated human being they are while you're at it.