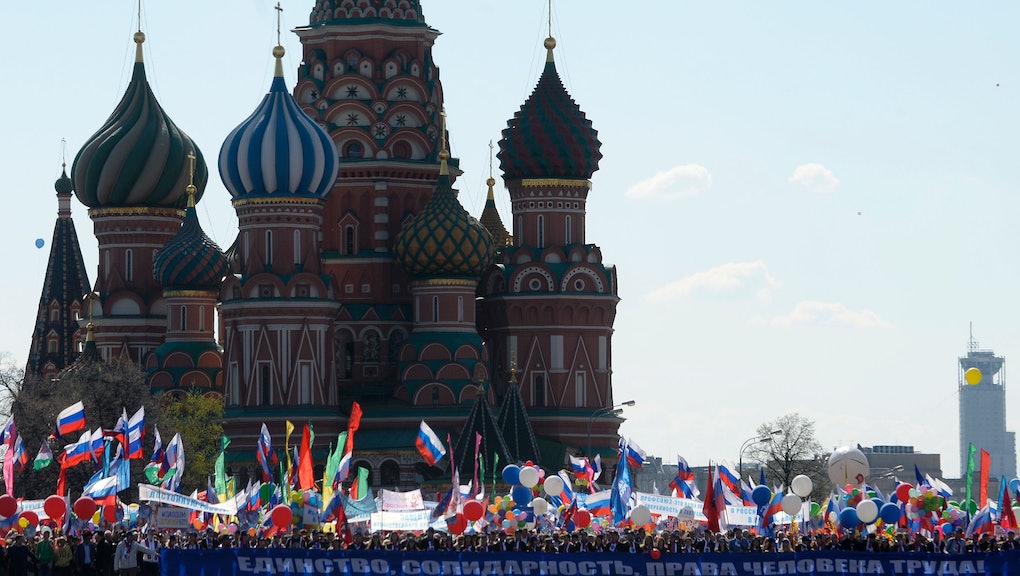 Police in St. Petersburg, Russia, arrested 20 LGBT activists who unfurled a gay pride flag during the May Day parade on Sunday.

According the English-language Russian news site Meduza, authorities told LGBT activists on Apri 29 that they were banned from marching. Two groups, Free Trade Unions and Green Activists, allowed LGBT activists to march along with them, as long as they did not bring the flags. However, when they did unfurl the gay pride flag, officials arrested them on the spot.

The decision to ban the LGBT activists was a reversal from policy in previous years.

According to a post on Russian social networking site VKontakte, and translated by the Washington Times, an LGBT activist said:

"For the first time in the history of the movement in Russia, [representatives from the LGBT community] will miss out on the biggest street event of the year."

LGBT activists in St. Petersburg have been banned from several other parades in the last year, according to Meduza, including the Peace March, the Anti-Fascist March and, ironically, the March Against Hate.

According to the Washington Times, the LGBT activists will face fines of up to $300 and 40 hours of community services.

In 2015, around 600 LGBT demonstrators marched during the May Day parade. Organizers expected more than 1,000 LGBT activists to march on Sunday.

While LGBT activists were not allowed to join the labor movement parade, one group was welcomed with open arms: Neo-Nazis.

A group called "Slavic Power Northwest" — an offshoot of a group that has been banned in Russia — marched in the parade. According to Meduza, they marched under the slogan "For the unity of Slavs and the White Race!"