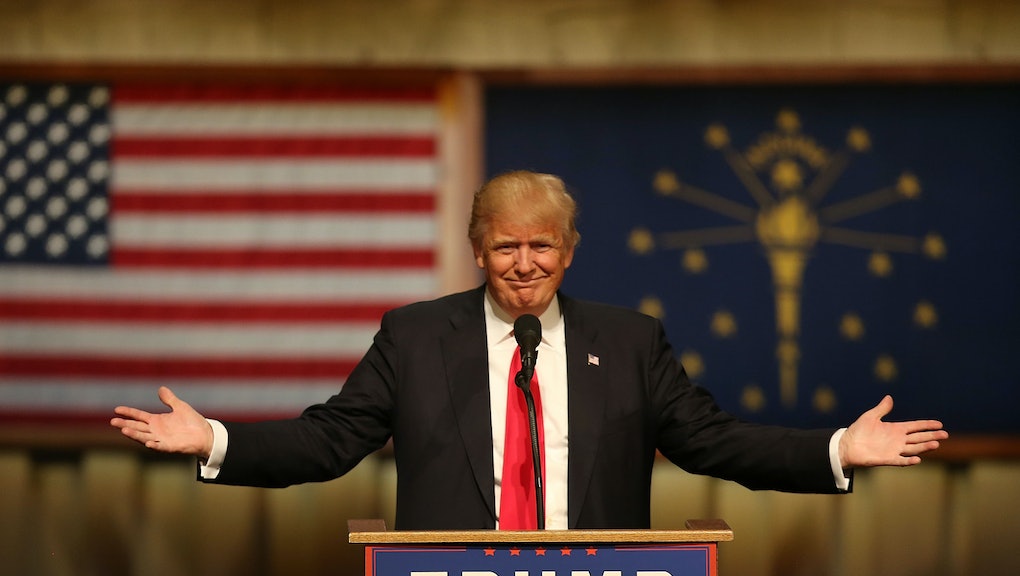 Donald Trump is the presumptive Republican nominee for president.

In the summer of 2015, that sentence seemed an impossibility. Trump's campaign announcement last June simply appeared to be the real estate magnate's latest and most creative plea for public attention. It was widely assumed that the public was about to experience a brief and entertaining bout of reality television in which he got to yell at people while boosting his personal brand, before returning swiftly to his usual business.

Trump has delivered on expectations of entertainment, but he has also defied every prediction that his campaign was unserious. Despite a mix of unease and outright hostility from Republican party elites and megadonors, a field of 16 other competitors, his departures from party orthodoxy on everything from trade to Israel, countless sexist and racist statements and a very special propensity for fabrication, he has prevailed.

Read more: 1 Chart Shows Why Democrats Should Be Very Nervous About November

Now the question is, can The Donald continue to defy the odds and win a general election? Given the state of the Democratic nomination race, in all likelihood his competitor will be frontrunner Hillary Clinton. Some political analysts believe that Trump's charms will wear off before a general electorate, as voters are forced to seriously contemplate the choice between a showman and a seasoned politician in the White House. Others believe that his disregard for establishment norms is exactly what will ensure his victory.

The most basic case for why Trump would lose to Clinton lies in his unpopularity. Trump has higher unfavorability ratings than any presidential candidate in decades, and by quite a wide margin. Seven in 10 Americans, and nearly half of Republican voters hold an unfavorable view of him, according to an April Associated Press-GfK poll. Trump is deeply disliked by women, who make up a majority of the general electorate, and is extremely unpopular with the hugely important Latino electorate, with whom the Republicans hoped to make inroads this election cycle.

In terms of motivating the party base, Trump has his work cut out for him in wooing Republican voters who cast their ballots for other GOP candidates. While he's outdone his competitors in most of the Republican nominating contests, he's usually won them by plurality, not a majority. Considering that Trump is not a professional politician and has not employed a traditional ground game in a crowded field, that's fairly impressive. But the reality for now is that huge swaths of the Republican electorate preferred other candidates with some fundamentally different perspectives on issues.

The votes that Sens. Ted Cruz and Marco Rubio garnered speak to a desire for a significantly more classic conservatism than Trump has on offer, and it's not clear if their supporters will believe him if he adjusts his persona or platform to win them over. Trump's outsider status is also going to be an obstacle as he looks to connect with disenchanted and skeptical GOP party elites and megadonors for the roughly $1 billion he'll need to spend in the run-up to Election Day.

The importance of subtlety and civility in communication are especially prominent in the way the public thinks about foreign affairs.

There are also questions over whether the kinds of rhetorical bombs that propelled him ever higher in the polls during the primary season will have a deleterious effect on his reputation in the run up to the general election. His talk of bans on Muslim immigration and building a wall to keep out Mexican rapists served him well in a part of the election cycle that allows candidates to be rewarded by activists and more ideologically extreme members of a party. But how will conservatives and centrists who value serious and stable leadership feel if he continues to use bombast and controversy to draw attention to himself?

The importance of subtlety and civility in communication are especially prominent in the way the public thinks about foreign affairs — what kind of person will be representing the nation and often unilaterally managing delicate matters related to war and peace? Here, Clinton, a former secretary of state and certainly no dove, will likely appeal to plenty of conservatives who fear that Trump lacks the discipline and subtlety to handle the challenges posed by forces like the complex threat of ISIS and the resurgence of Russian adventurism. A number of prominent neoconservatives have already begun to back Clinton for this reason.

Why Trump could defeat Clinton

The basic case for why Trump could win the general election center on the fact that he keeps managing to shatter every assumption about how presidential elections work. His most inflammatory and divisive statements gave him sustained boosts rather than hobbled him. His early frontrunner status didn't result in a quick flame-out. The party establishment's hostility to him didn't slow him. His less-than-pious public image didn't prevent him from winning the support of huge numbers of evangelicals. His refusal to toe the party line on issues like the decision to invade Iraq didn't dampen his popularity. All the while, he's grown more and more popular with Republicans.

Trump, through a truly unique mix of personality traits and policy positions, has tapped into something that resonates with the nation's conservatives — or at least with a bigger share of them than any of his peers have managed to appeal to. Right now it's commonly believed that his highly racialized brand of nationalism would not captivate voters outside of the white male Republican base, and would instead motivate women and people of color to turn out in high numbers just to vote against him. But at this point that, too, seems to be an assumption ripe for shattering.

Trump's unprecedented unfavorability ratings are a real liability — but it's important to remember that there's only one candidate in the past few decades who comes close to him: Clinton. Take a look at Dartmouth political scientist Brendan Nyhan's chart below ranking candidates' "very unfavorable" ratings, and you'll find that she has significantly worse ratings than any non-incumbent candidate since the Reagan era. Clinton is well-liked by many in the Democratic establishment, but when people dislike her, they dislike her quite a lot. Trump will likely capitalize on that quite effectively in the months to come.

A vote for Trump isn't necessarily a vote of total confidence in him — it can also be a vote of no-confidence in the political and economic establishment. Stagnant wages, soaring inequality, a frayed social safety net, skyrocketing debt and a broken legislative process have driven people to consider candidates they normally wouldn't. That deep skepticism of business as usual is the reason that Clinton, who typifies the establishment, at one point looked like she could fall to a 74-year-old socialist from Vermont. This election cycle so far has served as a referendum on whether or not the political establishment should be tweaked and improved upon or shaken up by an outsider promising to buck the status quo. Come November, we'll know which one most Americans want.