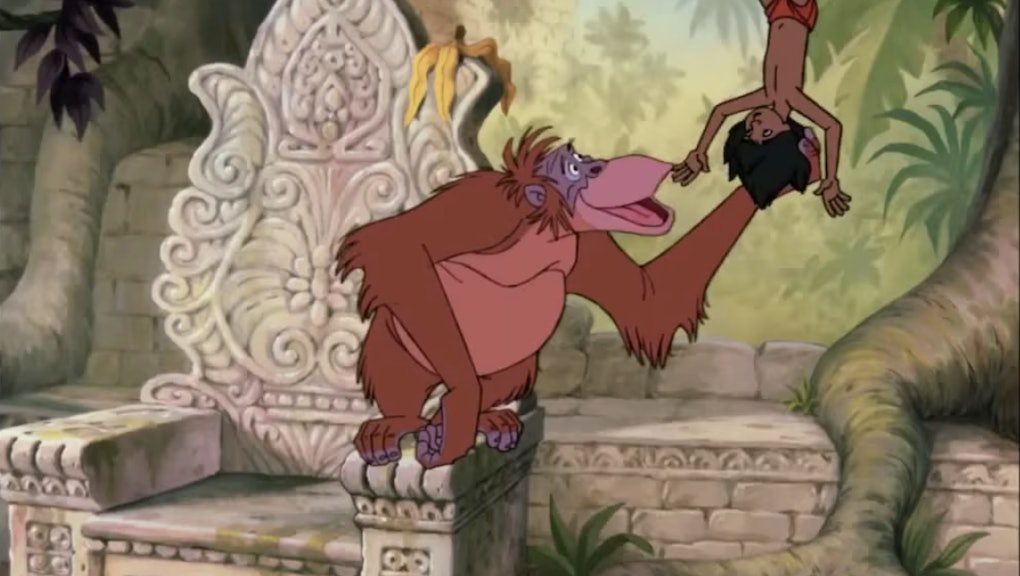 As much as we love our childhood animated Disney staples, it's not news some — okay, most — of them are problematic in their own ways.

There's a scene in the original Jungle Book that makes everyone a little uncomfortable. The ape, King Louie, dances around, singing to Mowgli, the human protagonist, "I Wanna Be Like You." It evokes a minstrel's performance, laden with black-white, racial subtext.

This is one of the more well-known Disney scenes which paints an inequitable picture by exploiting stereotypes of underrepresented demographics for a bit of light-hearted entertainment.

Yet the studio, almost half a century later, decided to include the racially vexing scene in their 2016 live-action remake of the film.

"As for Louie, what's extraordinary is that, even as public attitudes have changed, he hasn't," the New Yorker's Anthony Lane notes.

"He still croons 'I Wan'na Be Like You,' despite the deep racial unease that the song (and the whole scene) provoked; did executives really decide that its worth as a heritage item, within the Disney brand, exceeded all other demands?" Lane queries.

The preservation of "I Wanna Be Like You" suggests there is an unwillingness to mend its ways — or at least a lack of urgency to do so.

Disney has a long and murky history when it comes to diversity of all kinds. There is undeniably the issue of pervasive racism. The Jungle Book aside, there are countless other examples.

The black crow in Dumbo — who, not unlike King Louie, connotes a black character — is called Jim Crow.

"The name is a glib reference to the systems of state-sanctioned terrorism that defined black life in the American South throughout the early to mid-20th century," Mic's Zak Cheney-Rice explains.

And if we're not ruining enough of your favorite childhood films already, there's always Aladdin. But we'll throw you a bone first. It's the only blockbuster film in history to feature an Arab hero (messed up, right?).

But here's the bad news: The movie uses Arab and Oriental tropes as a crutch, which the opening song nicely demonstrates:

"Oh, I come from a land, from a faraway place

The public uproar resulted in Disney ultimately creating an alternative, less offensive version of the song (but the songwriters still won Oscars).

Sexism: The Little Mermaid is just one example of a Disney heroine's being a poor role-model for little girls. While she does have agency, her major decisions (giving up her voice – literally) seem to be greatly influenced by the men in her life — her father and romantic interest. She was willing to fundamentally abandon her identity in the name of love.

Even more disturbing, it was the first Disney film with a female protagonist in which the male characters dominated the dialogue. And in the five ensuing princess films, the male characters on average speak three times as much as the female ones do.

Sexual identity: That's all to say nothing of LGBT representation. GLAAD recently published a Studio Responsibility Index, to assess the inclusion of LGBT characters by America's seven biggest studios. Disney did not fare well.

"Neither Disney nor Paramount included any LGBT content in their 2015 slates of 11 and 12 films, respectively," revealed GLAAD's SRI.

But, here's the thing: Disney seems to have repeatedly performed poorly in the realm of diversity with relative impunity. Stock prices for the Walt Disney Company have consistently risen over the past decade.

A profitable, corporate behemoth might not see a lot of incentive to change their ways when business remains so good.