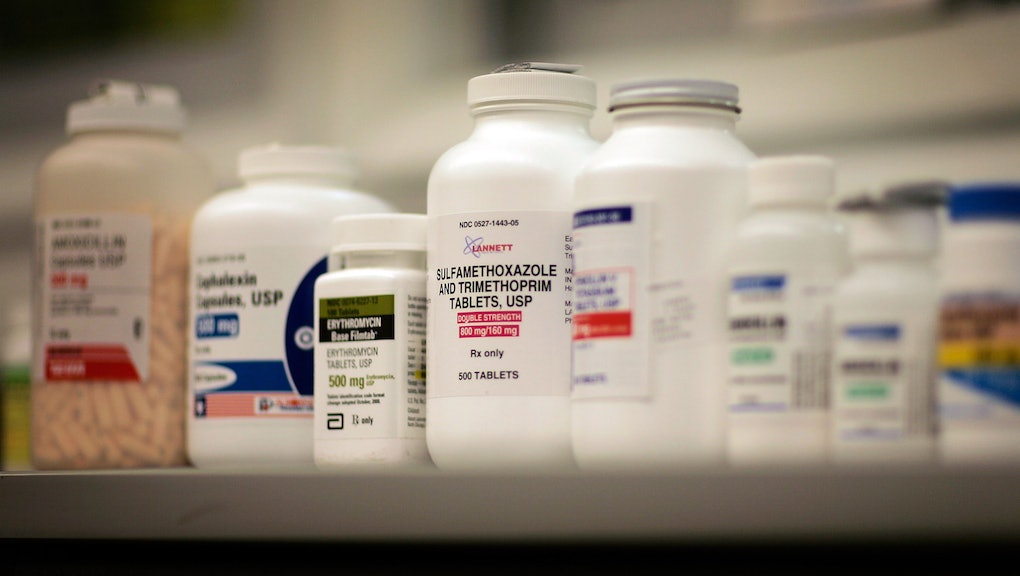 1/3 of Doctor-Prescribed Antibiotics Are Unnecessary, According to a New Study

When it comes to antibiotics, you can, in fact, have too much of a good thing.

Almost a third of all antibiotics prescribed in U.S. doctors' offices, emergency rooms and hospital-based clinics are unnecessary, according to a new study published in the Journal of the American Medical Association.

That works out to "about 47 million unnecessary prescriptions given out each year across the country to children and adults," the Washington Post reported. In most of those cases, antibiotics were prescribed to treat viral illnesses like cold, flu and bronchitis — ailments that don't even respond to antibiotics.

But why is that so dangerous? Is there really such a thing as taking too much medicine?

Yes, there is. It's called antibiotic resistance, and it's a major public health concern. At least 2 million people become infected with antibiotic-resistant bacteria each year in the U.S., and at least 23,000 of them die from those infections, according to the Centers for Disease Control and Prevention.

When you put antibiotics into your body, a survival-of-the-fittest scenario plays out: Weaker bacteria are killed, but stronger bacteria survive. The more we take antibiotics, the better our bacteria gets at fighting them. Eventually, that bacteria becomes completely resistant.

That's what happened in the case of the "super-gonorrhea" that spread through England in March 2015 — the sexually transmitted infection showed resistance to the antibiotic azithromycin, one of the two primary drugs used to treat it.

The CDC has warned about drug-resistant gonorrhea — not to mention a host of other bacterial infections becoming resistant to antibiotics, such as Clostridium difficile, salmonella and tuberculosis. The threat is so dire the White House launched a national action plan to fight it in March 2015.

To stop the spread of drug-resistant bacteria, health care providers need to cut down on unnecessary antibiotic prescriptions.

"Antibiotics are life-saving drugs, and if we continue down the road of inappropriate use we'll lose the most powerful tool we have to fight life-threatening infections," CDC Director Tom Frieden said, according to the Washington Post. "Losing these antibiotics would undermine our ability to treat patients with deadly infections [and] cancer, provide organ transplants and save victims of burns and trauma."

The takeaway? The next time you have a cold, don't pester your doctor for antibiotics. Pop a Mucinex, make some soup and watch a Keeping Up With the Kardashians marathon instead.