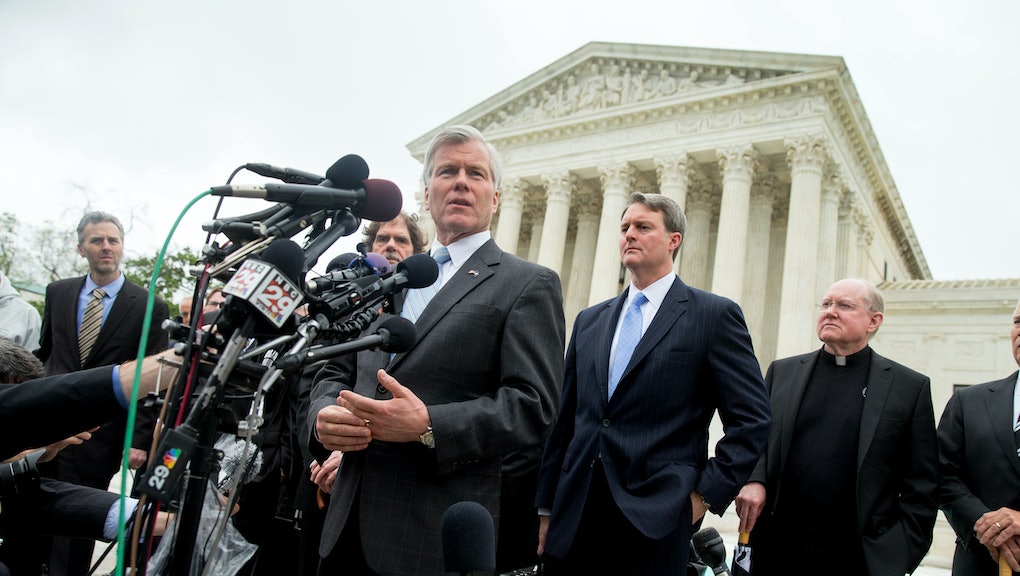 Last year, former Virginia Gov. Bob McDonnell was convicted of 11 charges of conspiracy, extortion and bribery after prosecutors accused the Republican governor of accepting $177,000 in luxury gifts and money to promote a dietary supplement company.

While this might seem like a clear case of a public official abusing their office for personal profit, the Supreme Court seems poised to accept the former governor's argument that the "access" he provided was not an "official action," and thus not a bribe.

In Citizens United, the court majority opinion authored by Justice Anthony Kennedy effectively ruled campaign donations are a form of free speech, striking down laws preventing corporations from spending money on political advertising in the period before elections. Toobin writes that McDonnell's lawyers are arguing "what federal prosecutors called bribery was also really just speech by Jonnie R. Williams, the McDonnells' benefactor," because "Williams was only paying for access (which is generally legal), not government action (which is not)."

Toobin argues this defense is conceptually similar to Kennedy's majority opinion in Citizens United, where the justice wrote that congressional authority to regulate campaign finance is limited to preventing explicit quid pro quo (you scratch my back, I'll scratch yours) agreements.

So basically, McDonnell is saying that all Williams did was give him money to set up meetings with other officials, and did not control the outcome of those meetings, so there was no quid pro quo. His actions were "routine political courtesies such as arranging meetings, asking questions and attending events ... he never exercised any government power on behalf of Williams," as CNN characterized the defense.

SCOTUS wants there to be ironclad proof of an actual quid pro quo agreement, despite the fact corrupt politicians are often much more subtle. In other words, ironclad logic.

"Look at the implications of what [Mr. McDonnell's] pay-to-play theory of government really is: that people can pay for access, that they can be charged to have a meeting or have a direction made to another government official to take the meeting," government attorney Michael Dreeben told the court, according to the Wall Street Journal.

According to Toobin, the justices seem dangerously close to accepting the defense's argument. And that's not just his opinion: CNN, Slate and the Washington Post have all reported Supreme Court justices seem sympathetic to the argument existing anti-corruption laws are too broad and risk criminalizing commonplace interactions between legislators and citizens.

"It will be an amazing thing if — in a year when voters across the spectrum are infuriated and sickened by the influence of money in politics — the Supreme Court decides that poor Bob McDonnell should be let off the hook because he only did what every politician does every day: Take a lot of money to open doors for a rich guy," Slate's Dahlia Lithwick wrote.

On the other hand, it was also kind of amazing that the same court decided it was in the best interests of the country to allow unprecedented corporate money in politics in Citizens United.