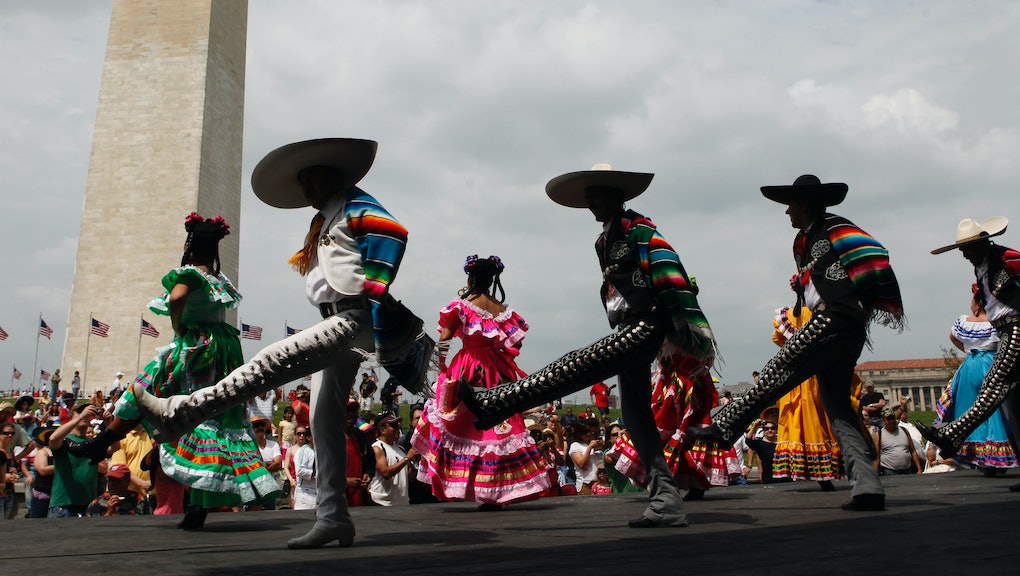 Happy Cinco de Mayo! As the biggest Mexican-American holiday in the U.S., millions of your fellow residents will be participating in festivities, parades and parties on May 5 (and, likely, getting pretty drunk). Because Cinco de Mayo is a cultural celebration, however, there are a couple of things you should probably do to avoid coming across as a real Donald Trump.

Here's some tips to ensure your Cinco de Mayo experience is as cool and awesome as you want it to be, instead of dumb and bigoted like you, a well-meaning person, presumably don't want it to be.

"Día de los Muertos (Day of the Dead, aka The Day Where Those Cool Sugar Skull Skateboard Decals Come From) is a Mexican holiday in which individuals honor their dead loved ones by visiting their graves or having celebrations in their honor," writes Ellie Guzman on Medium. "For many it is deeply religious and is a source of comfort that those that have passed on are still loved and are with us spiritually."

It is entirely different from Cinco de Mayo, which is a commemoration of General Ignacio Zaragoza's victory over much better equipped French military forces at the Battle of Puebla in 1862. The foreign forces, sent by Napoleon III, were attempting to set up a French-controlled client state in Mexico. In part because the U.S. has a large Mexican-American population, and in part because the U.S. loves commercially lucrative holidays, Cinco de Mayo is celebrated to a much greater extent stateside than in the actual country of Mexico.

So yes, the skull makeup and costumes ...

... are for an entirely different holiday than Cinco de Mayo.

Cinco de Mayo is also not the same thing as Mexican Independence Day, which is in September and happened more than 50 years before the Battle of Puebla.

You don't need to be knowledgeable about Mexican history to drink a few margaritas or hang out at a Mexican restaurant. But if you intend to celebrate Mexican and Mexican-American culture on May 5, you should probably be aware of the very general basics of the holiday you're celebrating. Wearing skull makeup on Cinco de Mayo would be like shooting off red, white and blue fireworks on Halloween.

2. Please avoid making up Spanish words which do not exist, like "El Bruncho."

For the record, multiple sources confirm the closest Spanish-language equivalent is "almuerzo," a word which also refers to lunch.

But in general, don't just make up random Spanglish — it can come across as mocking the real Spanish language. At best, it's just incorrect and kind of weird.

3. Are you a white person? Please don't wear a sombrero.

It doesn't really matter whether you intend to stereotype people of Mexican descent, because it will be interpreted that way by people correctly pointing out that the sombrero is widely associated with stereotypical depictions of Mexicans.

It's also inaccurate: as the Guadalajara Reporter writes, "some might argue that the classic image of a campesino wearing a sombrero while taking a nap has all too often been used to characterize Mexicans as lazy — a stigmatization that anyone who has lived in this country for a length of time will know is far from the truth ... [today] only mariachis in urban areas wear sombreros in public and most Mexicans regard them as party pieces."

To put it another way, it's as silly as dressing up like a cowboy to celebrate Independence Day.

4. You should probably avoid costumes in general, honestly.

The only thing worse than sounding like Bill O'Reilly ranting about sombreros is dressing like this guy he does not find offensive.

You are not the Frito Bandito — a mascot which was retired in 1971 for being super racist. Anything too offensive for 1971 is going to make you look deliberately disrespectful more than 40 years later.

Faking a Mexican accent if you aren't Mexican or Mexican-American is linguistic blackface and anyone who hears you imitating Speedy Gonzales is going to fairly conclude you think it is funny to mock an entire ethnic group.

6. Do, however, feel free to celebrate Cinco de Mayo without being racist.

There is absolutely nothing wrong with enjoying the vast cultural bounty of the planet Earth, including partaking in holidays, festivals, cuisine, music and history of other cultures. Go have a margarita, eat some Mexican food, attend parades and celebrate our neighbor to the south's history and culture.

There is, however, something wrong with reinforcing negative stereotypes about those other cultures while doing so. So please don't act the fool while celebrating on May 5, and try to keep the holiday's awesome anti-colonialist origins in mind.

7. If you must smash a piñata, it would be ideal if you pick a Donald Trump one.

Because screw that guy and his stupid wall, which Mexico has already said it will not be paying for.