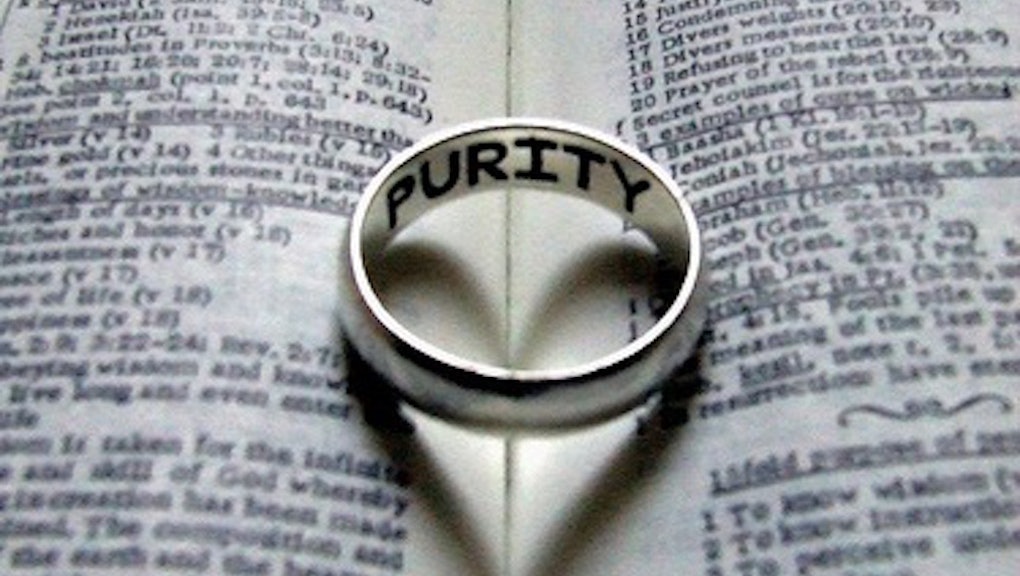 Breaking news: Abstinence doesn't work. No, seriously — promising to avoid sexual activity outside marriage is a great way to set yourself up for failure, not to mention a great way to get a sexually transmitted infection.

Young adults who have taken virginity pledges have significantly worse reproductive health outcomes than those who haven't, according to a study published in the Journal of Marriage and Family. Compared to non-pledgers, unmarried adolescent girls and young women who vowed to stay abstinent, then became sexually active anyway, were more likely to get pregnant or become infected with human papillomavirus.

Essentially, vowing not to have sex is kind of like promising to break your promise — which means it might be better to avoid preaching abstinence in the first place.

Researchers at the University of Massachusetts Amherst set out to compare the sexual health outcomes of teen and young adult women who broke virginity pledges with those who never pledged in the first place. The study examines the rates of non-marital pregnancy and STIs among people who faced similar exposure to both.

Previously, the research team noted, studies have not accounted for the fact that people who pledge abstinence — an estimated 12% of girls and women under the age of 25 in the United States, according to the study — might engage in different sexual behaviors than those who don't. As a result, the two groups face different levels of risk.

However, considering a mere 3% of American adults actually end up waiting until marriage to have sex, plenty of pledge-breakers end up behaving similarly to non-pledgers, and it turns out they're probably worse off. According to the study, which relied on data from the National Longitudinal Study of Adolescent to Adult Health, when exposure risks were controlled, young women who broke their abstinence vows were more likely to get HPV if they had multiple sexual partners: 51% were HPV-positive, compared to 33% of non-pledgers.

Additionally, pledgers were more than 50% more likely than non-pledgers to get pregnant outside marriage, often unintentionally. The former group also had higher rates of non-marital pregnancy within the first six years of sexual activity, with 30% getting pregnant in that time frame; the rate was just 18% for women who didn't pledge.

The reason is clear, according to Anthony Paik, associate professor of sociology at UMass and lead author of the study: It's because abstinence-pledgers probably receive abstinence-only education, which means they're not taught about condoms or other forms of contraception.

"Our research indicates that abstinence pledging can have unintended negative consequences by increasing the likelihood of HPV and non-marital pregnancies, the majority of which are unintended," Paik said in a statement. "Abstinence-only sex education policy is widespread at the state and local levels and may return at the federal level, and this policy approach may be contributing to the decreased sexual and reproductive health of girls and young women."

When young adults are taught that contraceptives are ineffective — as they're frequently taught in abstinence-only sex ed courses across the country — they tend to be less likely to use them, putting them at greater risk of facing STIs or unintended pregnancy.

"If adolescents either are provided inaccurate information about condom use or contraception or are socialized to be hostile to these practices, they could be in a bind when they break pledges, as almost all of them do," the study authors write. "Even though this research focuses on the effects of abstinence pledging, a direct implication is that abstinence-only beliefs, more generally, can have perverse unintended consequences."

So while there might be at least one good reason to promote sexual abstinence (hey, it is still the most effective way to avoid STIs and unintended pregnancy), focusing on abstinence alone doesn't work. Instead, it sets young people up to get screwed — and in more ways than one.