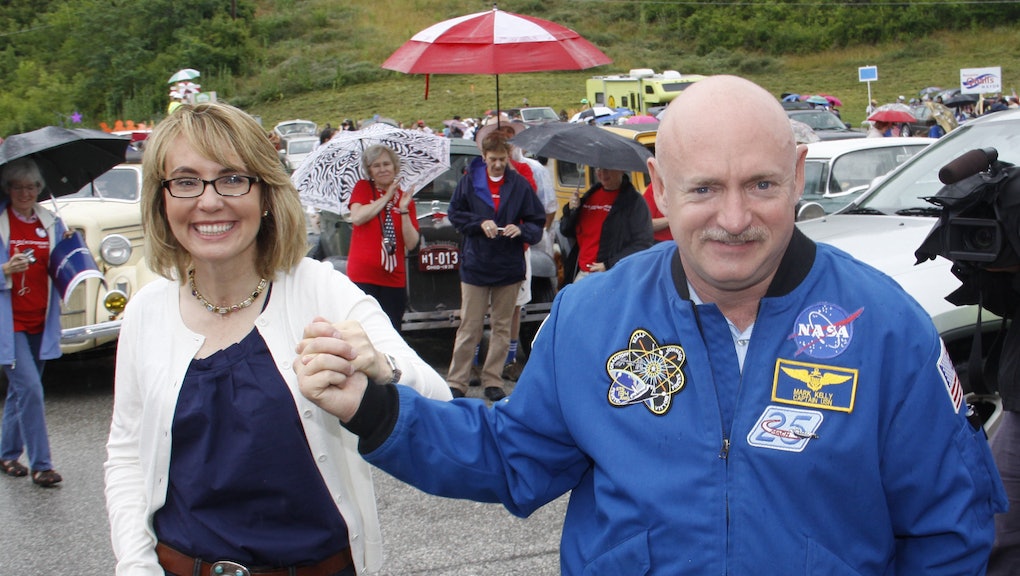 Mark Kelly understands how to pilot a space shuttle. What he doesn't get is why the hell Congress won't stop people on the TSA No-Fly List from shopping at gun shows.

Kelly is a retired NASA astronaut and Navy combat veteran. He's also the husband of Gabrielle Giffords, the former Arizona congresswoman still recovering from being shot in a gunman's 2011 rampage.

His latest mission: Fighting what he says is an incomprehensible lack of a law that would flag prospective gun buyers based on their status as suspected terror risks.

Kelly and Giffords travel the country under the aegis of Americans for Responsible Solutions, the gun-control lobbying group they founded after the 2012 massacre at Sandy Hook Elementary School in Newtown, Connecticut.

As mass shootings continue to roil the country, the couple is hoping this year's elections will bring new pressure to bear on addressing what Kelly calls the "terror gap" in gun sales.

Politicians from both sides of the aisle regularly offer condolences and condemnations after attacks in places from Newtown to Aurora to San Bernardino.

When you tell somebody that suspected terrorists in this country have attempted to purchase guns and explosives from U.S. dealers 2,200 times, they're shocked. And you know what? They're really shocked to find out [terrorists] were successful 91% of the time ... That means we have sold over 2,000 guns — assuming they're only buying one gun at a time — [to] people we know are on the terrorist watch list.

Backing for closing the "terror gap" hit 82% in a national poll conducted for ARS, with approval reaching 74% among gun owners.

"That level of support is up there with ice cream and free money," Kelly said. "It's really high."

So what's the holdup? Kelly lays the blame squarely at the feet of the gun lobby and the lawmakers who bow to its power.

"This is 100% a powerful corporate interest led by the National Rifle Association. It does not allow members of Congress to vote on this bill," Kelly said. "They prohibit them from voting to keep guns out of the hands of terrorists ... The National Rifle Association is basically opposed to any restriction in selling firearms to any individual — even if it's a terrorist."

For some lawmakers, he says, it seems almost a fixation: "I had a U.S. senator once tell me in a phone conversation [about] the Manchin-Toomey background check bill [three] separate times [that] they had an 'A' rating from the NRA, as if it was like a badge of honor."

Gun control issues can be handled both at the national and state legislative levels, but the president's opinion matters because of veto power, Kelly said.

Ironically, perhaps, "when the Bush Administration created the no-fly list, the White House also said, 'Hey, by the way, we really shouldn't allow these people to buy guns, either,'" he added. "I mean, it started with President Bush, but it's still something that Congress was still unable to do."

Democratic frontrunner Hillary Clinton, who's had both Giffords and Kelly at her side at campaign events, unsurprisingly supports the legislation.

Bernie Sanders, who continues to represent Vermont in the Senate and has run into static from rival Clinton's camp over his stance on guns, has similarly spoken in favor of such restrictions:

On the GOP side, presumptive nominee Donald Trump's team skirted the issue.

"Pass on this one," spokeswoman Hope Hicks replied to an inquiry about Kelly's campaign.

Due process: For its part, the National Rifle Association insists those attacking the organization on the so-called terror gap are getting it twisted.

NRA spokesman Lars Dalseide said the organization "has never supported the idea of terrorist or dangerous people having access to firearms and suggesting otherwise is a blatant lie."

The truth is that 98% of those on the watch list are neither American citizens or resident aliens so they can't legally purchase firearms in the first place. The truth is that terrorist who perpetrated the attacks in Fort Hood, Tennessee, and San Bernardino weren't on the terror watch list and politicizing their evil intentions won't make it any more true.

Dalseide specifically pointed to cases of people being wrongfully placed on watch lists, as documented, for example, by the ACLU. If the sort of gun regulations Kelly supports become law, he said, those people are "in jeopardy of losing a Constitutional right without any due process."

No sale: Kelly says the argument that the legislation is weak because it could harm people wrongfully listed as terrorists doesn't stand up. People can petition to be removed from the list.

"You can do this without affecting any responsible person's Second Amendment rights. I'm a gun owner. I'm a strong supporter of the Second Amendment," he said. "But I also think we shouldn't be stupid about it. We shouldn't make it easy for terrorists to buy firearms."