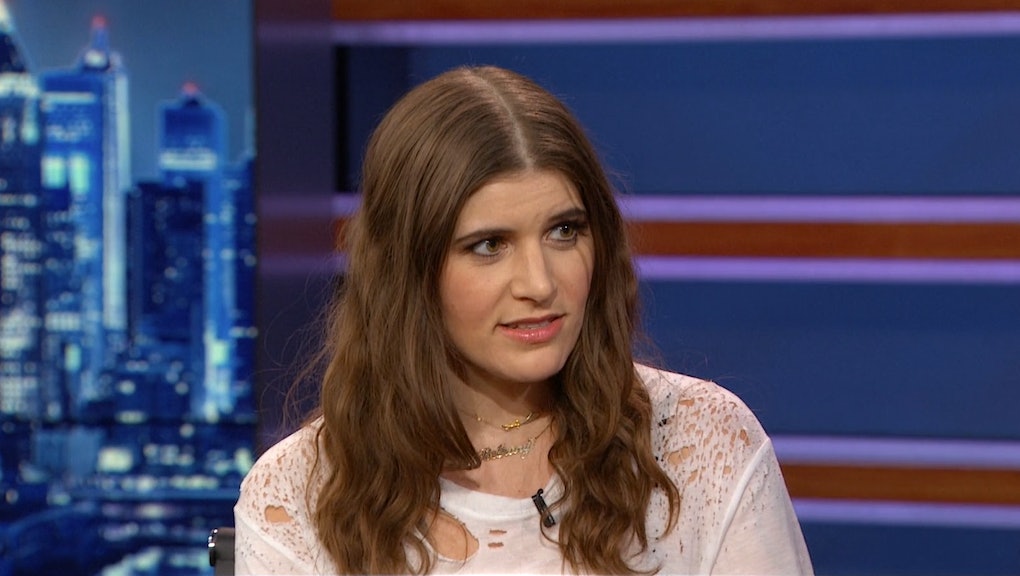 In January, Bethany Cosentino became a spokesperson for a safer and less sexist music industry overnight. The 29-year-old guitarist responded to a series of tweets from the Dirty Projector's Amber Coffman, who had accused music publicist Heathcliff Berru of sexually harassing her in a bar. Cosentino had a similar experience, as had numerous other musicians, who all shared their stories. Together they launched a conversation that needs to continue: Sexism and predatory behaviors are rampant in the music industry and must be addressed.

Wednesday night, Cosentino continued that conversation during an appearance on The Daily Show, but quickly clarified the stakes: "Let's be real," she told host Trevor Noah, "sexism and sexual harassment and this idea of women being sexually assaulted — it's everywhere. It doesn't exist just in my industry."

She described the thinking that led her to speak out against Berru's harassment in January. "As a woman, I felt it was so important to support my female peer," she said. "I didn't realize it was going to become such a huge thing." Cosentino now see tremendous value in her being a spokesperson for this issue.

"When somebody like me, or somebody like Amber, or any woman out there, comes forward and says, 'This is a situation, I'm not OK with it, the world should not be OK with it,' that gives other women bravery to come forward, and stand up, and say, 'I've experienced this, we really need to put an end to this kind of behavior,'" she told Noah. "I hope that there is one woman out there that is now standing up to her boss, or standing up to a man in the world that is making her feel less-than because she's a woman."

Cosentino also spoke about the way audiences interact with pop stars' sexuality in music. Playing devil's advocate, Noah asked about how we respect the personal boundaries of artists like Nicki Minaj, who put their sexuality at the forefront of their art at times.

"What Nicki Minaj does with Nicki Minaj's body is Nicki Minaj's business," Cosentino said. "There are so many women out there — Nicki Minaj, Beyoncé, so many women — who are out there saying, 'I'm a strong, empowered women, that does not make me promiscuous, that does not make me any of these things that people assume you are because you're wearing crop tops and booty shorts.' Girl, you look good and you should be proud of yourself. You're smart and you're beautiful. Go for it."