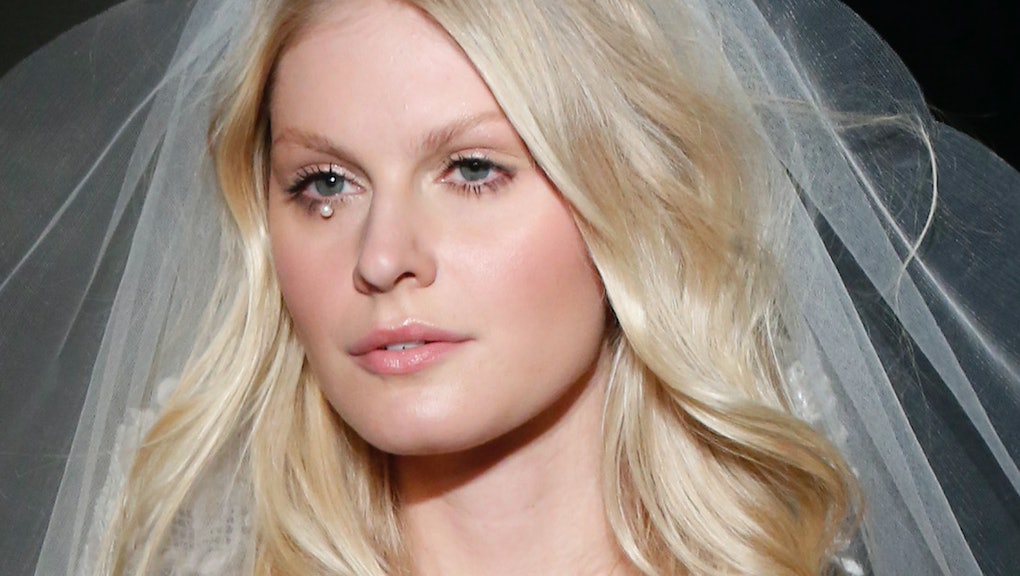 This spring, Tiffany*, 29, is getting ready to get divorced — and she couldn't be more excited about it. She's just waiting until her husband gets his 10-year green card.

Tiffany married Steve* two and a half years ago. At the time, he already had a wife and children back in Vietnam, the country of his birth, and Tiffany had a long-term boyfriend. But she wanted to start putting savings aside, so she called a Vietnamese friend and asked if she knew of anyone who was looking for a wife. Her friend introduced her to Steve, and the two decided during their first date to get hitched.

"In the Vietnamese community, we know about [fake marriages]," Tiffany said in a phone interview. "We all know that this is what people do. I'm not lying or hiding it."

Steve divorced his real wife "on paper," although he intended to reunite his family after his marriage to an American earned him a more permanent status. They applied for their marriage certificate a few weeks after meeting.

"My job was easy," Tiffany said. "I didn't have to do much. It was just like making friends."

[ friend introduced her to Steve and they had a platonic blind date where they decided to get hitched. Plenty of educated millennials with citizenship are exchanging wedding vows for cash and green cards or military benefits. The phenomenon is far more cmmon, and generally less shady, than you might expect.

Of the hundreds of thousands of immigrant visas that are approved based on marriage to a United States citizen every year, about 30% are fraudulent, according to 2006 Immigration and Customs Enforcement (ICE) data. This means that thousands of people in America are marrying someone they don't love — or, in some cases, even know particularly well. Under American law, this is a practice known as marriage fraud, though it's also sometimes called a "convenience" marriage. It's a crime punishable by up to five years in prison and a fine of $250,000.

It's difficult to gauge exactly how common marriage fraud is: not all cases are prosecuted, and according to U.S. Immigration and Customs Enforcement media coordinator Luis Martinez, the government no longer keeps distinct records separate from other kinds of document and benefit fraud. But in 2006, ICE estimated that around 135,000 so-called "green card" marriages are fraudulent.

For her part, Tiffany said that she knows two female friends on the opposite side of the spectrum, immigrants without citizenship looking for fake marriage partners.

"If they had another choice, they would have gone with the other choice," Tiffany said. "It's a lot of money [to pay someone to marry you for papers]. If you're going to get kicked out of the country, you're going to do whatever it takes ... they need to be able to stay and work."

Marriage fraud is also widespread in the military, as military husbands are more likely to earn more money and get more benefits than single men. While there are no studies that try to estimate how many servicemen get hitched for cash every year, it's clear that a substantial number of millennials are heading to the altar for business, not love.

Many couples come up with an agreed-upon monetary arrangement before getting married. Steve, for instance, paid Tiffany $10,000 when they got the marriage certificate, which she used to buy a house for her and her real boyfriend, and $15,000 when her husband's 2-year green card went through. Her husband will pay the final installment, $5,000, when the 10-year green card comes through and they get divorced.

In the meantime, Tiffany is careful not to post cutesy pictures with her real boyfriend online. "There's no regular schedule of meeting up. Nothing like that ... We never had to kiss, even in the wedding — just take pictures together," she said. "With Vietnamese culture, we don't have much public affection, so no one questions us." The couple did, however, have a fake honeymoon in Vegas, where Tiffany brought a friend and enjoyed a free vacation.

Tiffany suspects she and Steve have never had trouble with immigration authorities because they are educated and employed. "I'm not doing anything wrong," she said. "The reason why we pass [the immigration authority interviews] is because we both work and pay our taxes. We're responsible and we support the community."

Tiffany's marriage is a clear-cut case of marriage fraud, but the situation gets trickier when the couple actually lives together. At an East Coast Navy station, 25-year-old Alex* is processing divorce papers after his own convenience marriage ended on sour terms. Last year, he asked a few friends if they'd be willing to marry him so he could live off-base, a benefit that is only available to married servicemen. In exchange, Alex's fake wife would live with him rent-free and receive full health coverage.

Eventually, a woman named Megan*, who Alex had met only a few times before, said yes.

"We got married and got an apartment. We dated while being married. But it sort of fizzled out," he said. "It became emotional for her. She wanted me more than I wanted her. So it wasn't fair to her ... We were exclusive. But we entered the marriage just for benefits and all my friends knew that."

They've filed for divorce and Megan has since moved out. Yet she is still stalling the process for financial reasons. "She's withholding [divorce papers] until she can afford health care on her own," Alex said. "By now we have minimal contact."

Alex's family doesn't know he was married and living with a woman for eight months. But much like Tiffany's upper middle-class immigrant community, Alex's military friends see marriage fraud as a fairly widespread practice. "I personally know 4 or 5 other couples in the military [with fake marriages]," he said. "Majority of them are military to military, one is a same-sex marriage ... The fake gay couple are straight and date women."

With the exception of the same-sex marriage between two of Alex's straight military comrades, most of the fake couples he knows eventually try dating each other. Sometimes the experiment even leads to real romance.

"There's very little difference between swingers and a fraudulent marriage. Most people in convenience marriages at some point do date each other," he said. "Even one couple I know came out to their parents and developed a great relationship. Now I would say they have a normal marriage."

Although his marriage fraud ended with a ruined friendship, both Alex and Tiffany agreed that convenience marriages were a last resort rather than a savvy business move.

"Health care gets expensive real fast," Alex said. "I think there'd be less people getting married for benefits if the military let people live off base and didn't stick us in tiny cubes — if they treated us like people."

Whether millennials are getting hitched for work or health insurance, it's not because they don't respect marriage. Both Alex and Tiffany hope to get married someday. It's just that, in their eyes, a fake starter marriage might help with obstacles along the way.