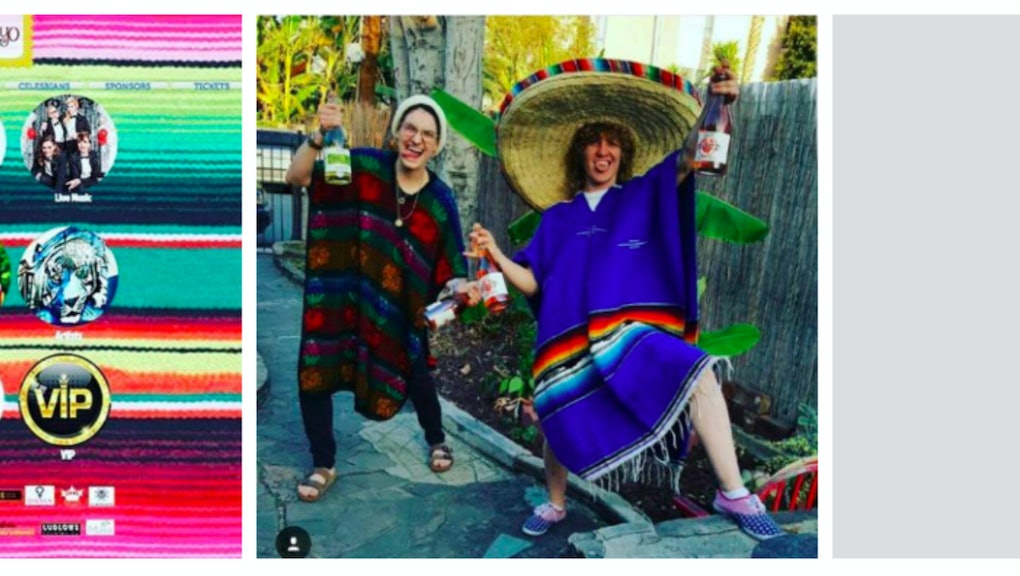 The photo depicted two women wearing ponchos and sombreros holding up beverage bottles in apparent commemoration of the Mexican holiday, which celebrates the Mexican Army's victory against the French in the Battle of Puebla in 1862. "Single de Mayo" describes itself as the "biggest Sunday Funday Fundraiser" for Los Angeles' lesbian and queer communities.

Though the picture has since been deleted, activists have been using social media to distribute and critique the image.

"Another reminder of the cluelessness that exists within the queer community," posted The Gran Varones, a Philadelphia-based, Latino-themed mixed media empowerment project.

"Microaggressions are not fundays for Latinos," the post said. "White peepoe, please stop."

A digitally altered snap of a white woman with a mustache and a sombrero was also missing from the Instagram account.

Since the images disappeared, several commenters on Instagram have called out the organizers of the party for being disrespectful toward Mexican culture.

"This event is racist as fuck," one commenter wrote. Others were quick to call out the brand for trying to erase the evidence of the pictures.

Another commenter argued that this behavior alienates many within the LGBTQ communities that the event purports to represent from attending such an event.

"Yeah because this doesn't alienate Xicanas or make us feel like we're a joke to you or anything," she said. "Fucking privileged ass white people thinking that they're benefiting one group but ignoring that they are being fucking racist in process. Good job guys."

The controversy has already led one celebrity to decline to attend the party.

Angelica Ross, star of transgender-themed YouTube series HerStory, tweeted that, after activists pointed out the event's racist themes, she'd pass on showing up.

Mic reached out to the event's organizers to address the controversy, who sent an email in response.

In the email, organizers thanked those who commented on the pictures.

"At the time we took [the photo], our intention was to celebrate the spirit of lesbians coming together for a fun afternoon, which includes alcohol, as well as the day, Cinco de Mayo, that it was named for," said party organizer Anna Goodman.

"We see now how this photo depicted Mexicans as drunks, a negative stereotype that has been perpetuated by the white culture," she added. "We in no way, shape, or form purposely tried to present a negative connotation on the Mexican culture, and we sincerely apologize if we offended anyone in the process."

They also said organizers understand that they should never have taken or posted the photo in the first place.

"We apologize to all of you and hope that this mistake won't take away from people enjoying the wonderful event we are planning on Sunday."