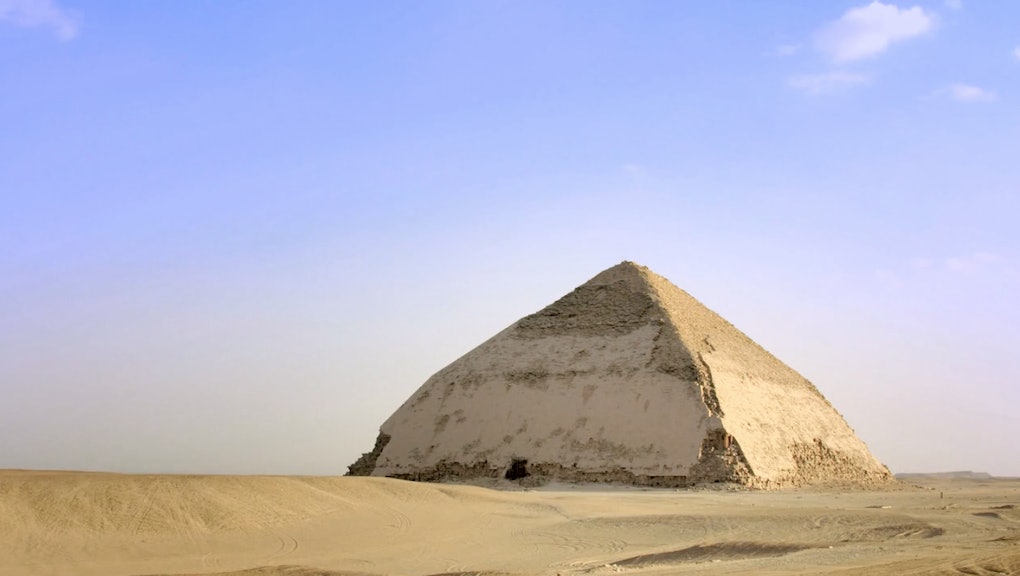 Using Cosmic Particles, Scientists Can Now See What the Inside of Pyramids Look Like

Researchers have finally figured out how to get a blueprint of Egyptian pyramids. Using cosmic particles, a team of researchers from Japan's Nagoya University was able to locate a hidden chamber inside the Bent Pyramid.

Despite having been around for thousands of years, we still don't know much about what Egypt's pyramids hold. Because of an archeological imperative to preserve the pyramids, researchers can't simply bust down the walls to gain access to their hidden chambers, according to the BBC.

However, a group of researchers has reached a breakthrough that could grant them an inside look using an X-ray-like technology to scan the interiors of pyramids. The project, called #ScanPyramids, is a collaboration between the Heritage Innovation Preservation Institute, the faculty of engineering at Cairo University and The Arab Republic of Egypt Ministry of Antiquities.

In December 2015, researchers buried 40 plates in the Bent Pyramid's lower chamber. The plates were covered in a film sensitive to muons — a cosmic particle. Muons are electrically charged particles that rain down from space. They can be used similarly to X-rays, according to a memo from the Heritage Innovation Preservation Institute. Muons "can go through hundreds of meters of stones before being absorbed," HIP says.

After 40 days, the researchers retrieved, processed and scanned the films. The resulting images revealed a second chamber 18 meters above above the lower chamber. While the the muon prints were able to indicate a new chamber, they were not able to precisely illustrate the location of the pyramid's corridors. Still, researchers have plans to test the muon scanning method in other pyramids, so we might finally get a peek into the complex systems inside.