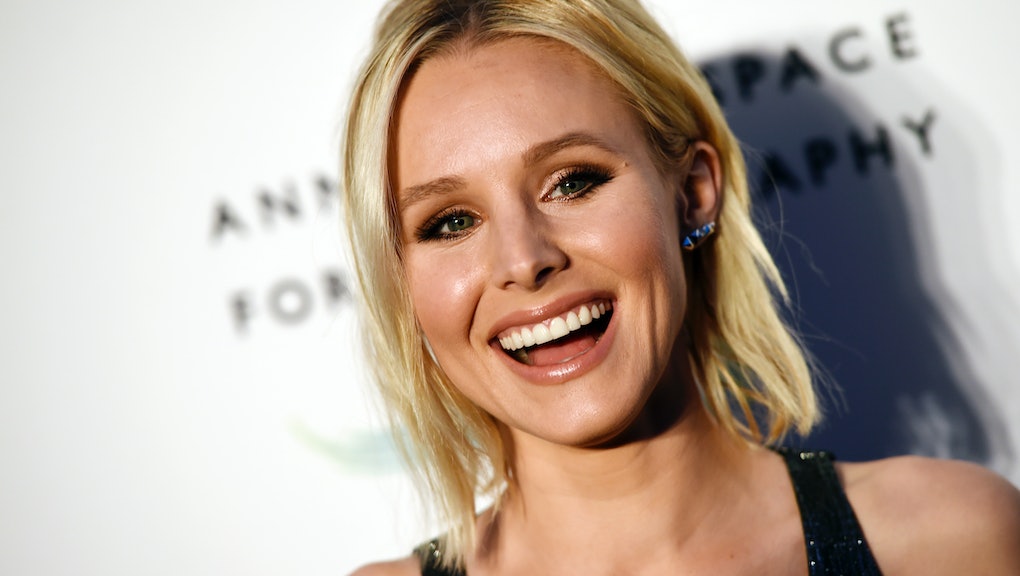 While there's still an enormous stigma attached to talking about mental illness, celebrities like Jennifer Lawrence and Lena Dunham are increasingly coming forward to talk candidly about their own experiences with depression and anxiety. Recently, actor Kristen Bell joined the conversation about mental health, revealing her own lifelong struggle with depression and anxiety, as well as her family's history with the disorders.

"I also struggled a lot with anxiety and depression," Bell told interviewer Sam Jones in a clip from the web series Off Camera, adding that she takes prescription medication to alleviate her symptoms.

Bell also shared how her grandmother underwent electric shock therapy years ago to treat her own depression. "It certainly affected my mom and broke her a little bit," Bell said. "But she's a nurse and she had the wherewithal to recognize that in herself when she was feeling it."

By having a conversation with her mother about how to deal with her own anxiety and depression, Bell was able to develop her own coping strategies. "I've always had a really open and honest dialogue about [my mental health struggles]," she said.

Bell's discussion of her family's mental health issues underscores an important issue for families across America, many of which have genetic predispositions toward anxiety or depression.

According to the The National Alliance on Mental Illness, one out of every five American adults, or 43.8 million people, deals with mental illness in a given year. Anxiety disorders are also incredibly common, with the National Institute of Mental Health estimating that nearly 40 million people in the United States grapple with an anxiety disorder. As Bell points out, anxiety is even more common among women, as women are twice as likely to be diagnosed with an anxiety disorder as men.

By coming forward with her own experience, Bell is promoting more awareness and open dialogue about mental health, which will ultimately reduce stigma and encourage those who struggle with mental illness to get help when needed.

"I have no shame," Bell said. "Because my mom had said to me, 'If you start to feel this way, talk to your doctor, talk to a psychologist, see how you want to help yourself. And if you do decide to go on a prescription to help yourself, understand that the world wants to shame you for that, but in the medical community, you would never deny a diabetic his insulin. Ever.'"

You can watch the full interview below.