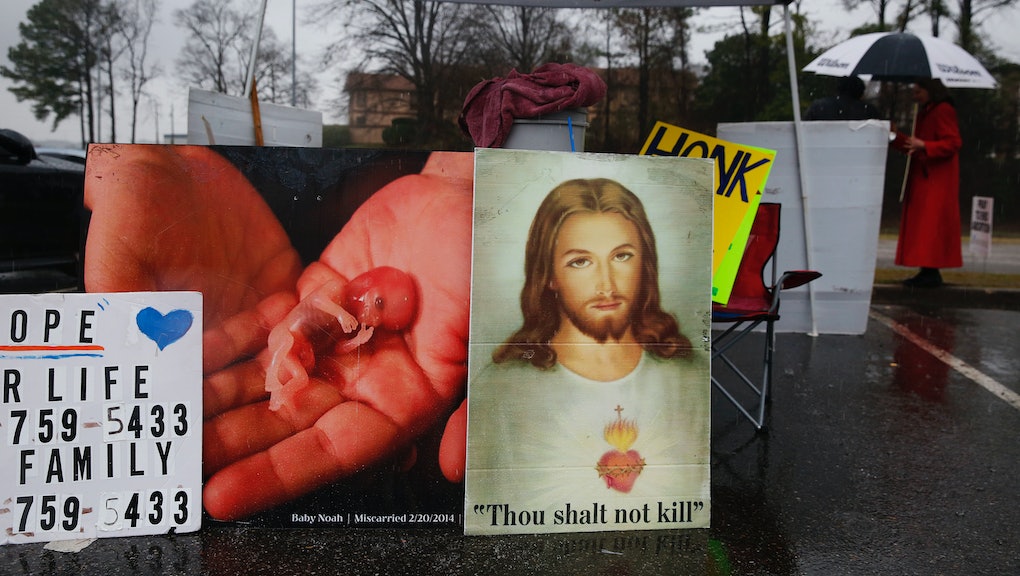 On Wednesday, Alabama lawmakers approved SB 205, a bill that would make it illegal for an abortion clinic to operate near a public elementary or middle school, which could effectively shut down at least one of the state's five remaining clinics. The ban happens to be modeled on the state's restrictions for registered sex offenders, but the reasoning behind it is slightly different: Proponents of the bill are concerned that anti-abortion protestors outside clinics are scaring the children.

Of course, the very same people who got the bill to the statehouse in the first place also happen to be anti-abortion protestors.

The bill is expected to be signed by ultra-conservative moralizer Gov. Robert Bentley — y'know, the guy who was recently enmeshed in a very public sex scandal — as he has expressed support for so-called school zone restrictions for abortion clinics before. If enacted, SB 205 would prohibit the Alabama Department of Public Health from issuing or renewing licenses for abortion clinics within 2,000 feet of a K-8 public school.

According to opponents of the measure, it's meant to target one clinic in particular: the Alabama Women's Center for Reproductive Alternatives, in Huntsville, which relocated across the street from a middle school in 2013. When the center — the only clinic serving the northern half of the state — decided to move, it was to comply with a different TRAP law, the Alabama Women's Health and Safety Act, which granted the state the right to eliminate Medicaid funding for abortion providers and was also ostensibly meant to shut the clinic down.

It would seem, then, that anti-choice lawmakers are actively trying to eliminate as many of Alabama's abortion providers as possible.

According to SB 205 sponsor Sen. Paul Sanford, however, the point of his measure isn't to close clinics; he just doesn't think they should be across the street from a school, because as he told the Times Daily in February, "they do tend to cause a certain amount of commotion on a regular basis."

"We can put a restriction on whether a liquor store opens up across the street and make sure pedophiles stay away from schools," Sanford said. "I just think having an abortion clinic that close to elementary-age school children that actually have to walk on the sidewalk past it is not the best thing."

It would seem, then, that anti-choice lawmakers are actively trying to eliminate as many of Alabama's abortion providers as possible.

Although lawmakers considered grandfathering in the Huntsville clinic to prevent it from closing, a move to do so failed in committee, according to the Associated Press. So, basically, because anti-choice protesters are wont to picket abortion clinics, displaying massive images of aborted fetuses and calling women murderers, abortion providers (not to mention the patients they serve) will likely be penalized.

If the bill is enacted, Alabama will become the first state to enforce a prohibition that essentially treats people seeking abortions like sex offenders, but also one of several states that polices providers' association with schools. Other states that have also become increasingly hostile toward reproductive rights in recent years, such as Kansas, have placed limitations on abortion providers' ability to volunteer in public schools or provide sex education, while places like Oklahoma have tried to bring anti-abortion rhetoric directly into classrooms.

Ironically, that anti-abortion rhetoric is exactly what proponents of SB 205 say they want to protect young children from. It's true that witnessing anti-abortion protests can be traumatizing for kids, as well as for patients, providers and clinic staffers' family members, but that hasn't done much to limit protestors' ability to harass people outside clinics. Apparently, the way to avoid that damage is simply to further restrict people's access to basic healthcare, curtailing their ability to exercise their reproductive rights.