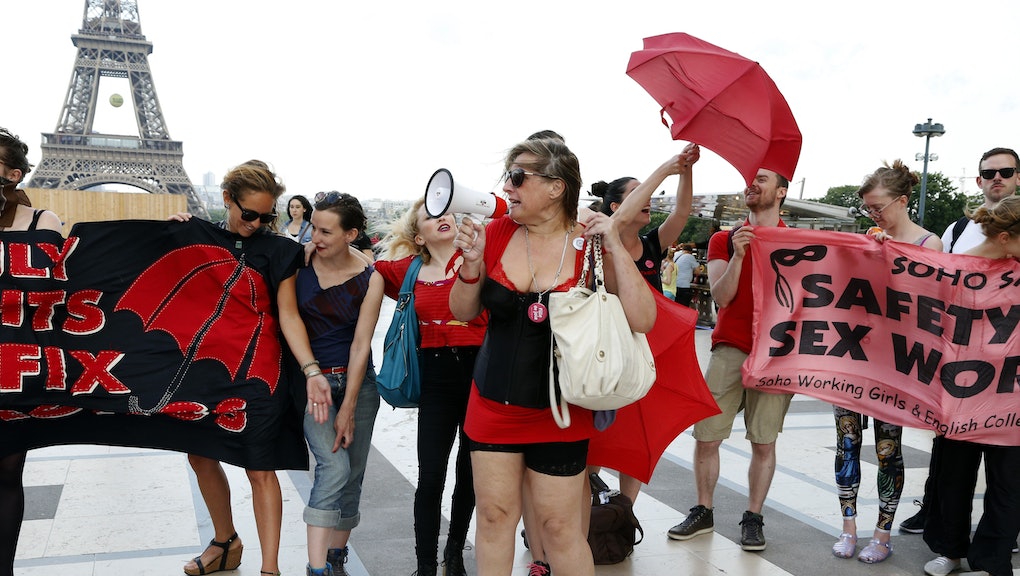 4 Feminist Reasons Why We Need to Support Sex Workers

As sex-positive as our generation might be, the sex industry itself is still a contentious topic. Some feminists think sex work objectifies women and is inherently exploitative, while others argue that sex work can be empowering.

Nonetheless, there's a growing movement to decriminalize sex work, a movement that was bolstered by the human rights organization Amnesty International advocating for global decriminalization in August. A recent New York Times Magazine piece also focused on the growing conversation surrounding sex work, featuring the voices of sex workers fighting for decriminalization. (Note: There's a legal distinction between legalization, which involves regulating "where, when, and how prostitution could take place," and decriminalization, which essentially "eliminates all laws" regulating sex work, according to Professor Donna Hughes at the University of Rhode Island.)

There are various complex class, race and gender issues at play in the debate over whether the sex industry can be a positive force for women. But one thing is clear: It's time to take an honest look at how anti-prostitution laws affect real sex workers today.

1. Making sex work a crime further marginalizes women, women of color and transgender women. The New York Times reported that women make up more than two-thirds of the people arrested for prostitution every year, or more than approximately 36,667 women nationwide. According to a study by the Center on Juvenile and Criminal Justice, women of color in San Francisco are also 31 times more likely to be arrested for prostitution than white women. These laws place a disproportionate burden on women of color and LGBTQ people, who are often racially profiled, arrested and even attacked or killed with impunity.

2. Criminalizing sex work promotes a culture of victim-blaming and slut-shaming.

According to a 2014 study, sex workers have a 45% to 75% likelihood of experiencing sexual assault at some point during their careers. Yet even though sex workers are at an increased risk of being assaulted, their reports are frequently minimized or dismissed by law enforcement, simply by virtue of their professions.

When former adult performer Christy Mack was raped and assaulted by her ex-boyfriend War Machine in 2014, for instance, she was met with a barrage of slut-shaming tweets blaming her for the attack, with people saying she deserved it because she was a "worthless" sex worker. In 2013, Chicago Sun-Times writer Mary Mitchell echoed this victim-blaming mentality, saying that Roy Akins, who was accused of raping a sex worker at gunpoint, should've been charged with theft instead of aggravated criminal sexual assault.

"When you agree to meet a strange man in a strange place for the purpose of having strange sex for money, you are putting yourself at risk for harm," Mitchell wrote.

3. When selling sex is a crime, sex workers are especially vulnerable to police brutality. Contrary to popular myths about abusive pimps and johns, many sex workers are more scared of law enforcement than they are of their clients. A 2015 data analysis by Vocativ of National Blacklist, a "bad client database and escort safety tool," found that sex workers were posting more online warnings about law enforcement officers than they were about abusive clients.

According to a survey of sex workers conducted by former sex worker Tara Burns, which polled about 40 sex workers in Alaska, more than half of the women who reported having been sexually assaulted said they had been abused by a law enforcement officer. Sex workers also reported having experienced police blackmail and were generally reluctant to report any crimes against them, regardless if law enforcement was involved, for fear of arrest. Decriminalizing sex work keeps sex workers safer, because it makes them less scared to report assault and other crimes.

4. Respecting an adult woman's right to make choices about her own body, including consenting to sex work, strikes at the heart of emancipation.

Many anti-prostitution activists argue that most women who sell sex are doing so against their will, thus conflating victims of sex trafficking with those who sell sex of their own volition. Yet there is a clear distinction between sex work and sex trafficking.

Decriminalizing sex work affirms that there is a distinction between consenting adults trading money for sex and abused children or sex trafficking victims being forced or coerced to have sex against their will. This distinction shows legal respect for a woman's autonomy and a woman's choice about what to do with her own body. Lumping sex workers in with victims of sexual abuse belittles women's agency and their ability to make their own choices.