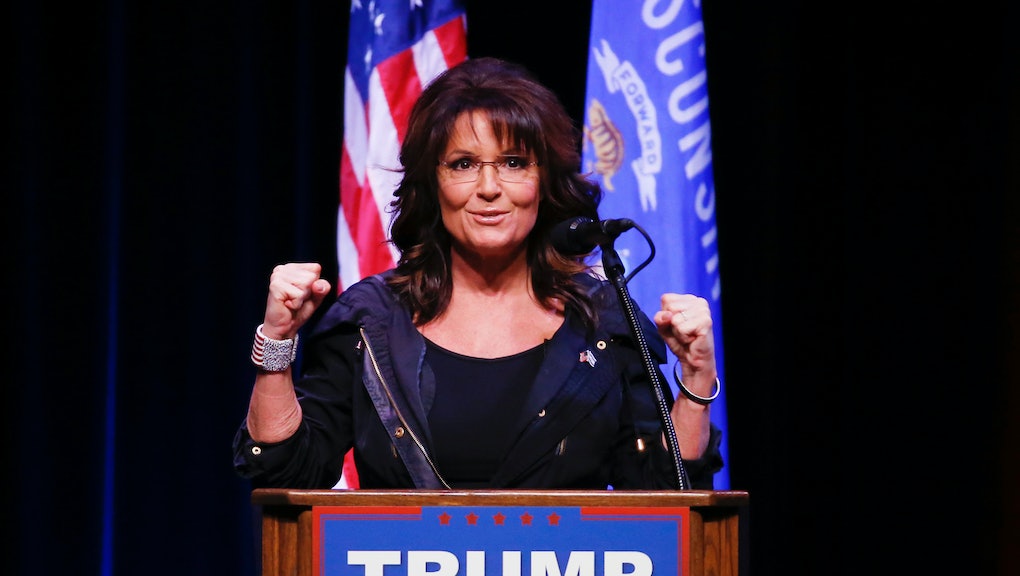 Tea Party darling and once-vice presidential candidate Sarah Palin (she of the "right-winging, bitter-clinging") has her own theory on why Speaker of the House Paul Ryan refused to endorse presumptive Republican presidential nominee Donald Trump earlier this week.

In a Sunday interview with CNN's State of the Union with Jake Tapper, Palin suggested Ryan was deliberately trying to undermine Trump in order to position himself for a 2020 presidential bid.

"I think Paul Ryan is soon to be 'Cantored,' as in Eric Cantor," Palin said in the interview, referring to the former speaker of the house who was pushed out of office in August 2014.

"His political career is over but for a miracle because he has so disrespected the will of the people," she continued. "Yeah, as the leader of the GOP, the convention, certainly he is to remain neutral, and for him to already come out and say who he will not support was not a wise decision of his."

"I think why Paul Ryan is doing this, Jake, is it kind of screws his chances for the 2020 presidential bid that he's gunning for," Palin concluded. "If the GOP were to win now, that wouldn't bode well for his chances in 2020, and that's what he's shooting for."

Ryan's primary challenger this year, a Tea Party type by the name of Paul Nehlen, is largely considered a long-shot candidate to overthrow the speaker of the house. It's unclear Palin, whose star has dimmed dramatically in the years since her disastrous nomination for the vice presidency in 2008, will have much influence on what voters eventually decide later this year.

Nonetheless, her announcement has clearly lit some fires, especially following similar criticism of Ryan by former Republican Speaker of the House Newt Gingrich.

While Ryan might have his future presidential ambitions in mind with respect to his non-endorsement of Trump, it's also likely he simply wants the candidate to tone down his approach and rhetoric in an election season where many Republicans are getting nervous Trump's run could stack the deck against their party in downballot races.

Many others are worried he could run the party into a historic loss in November that would cost the GOP the presidency for many years. Adding to the list of other Republicans to refuse to support Trump, including Mitt Romney and the Bush family, U.S. Sen. Gordon Humphrey recently warned Trump is a "sociopath."