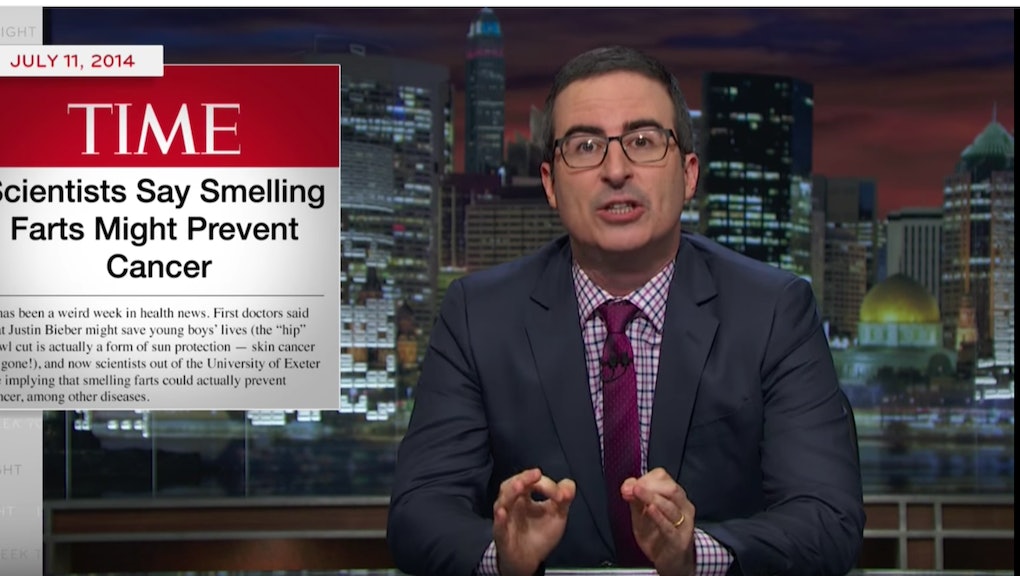 John Oliver Details Why So Many Scientific Studies Are “Bullshit”

On Sunday night's episode of Last Week Tonight, John Oliver took aim at the plethora of scientific studies that get misrepresented in the media.

"Science is constantly producing new studies, as you would know if you've ever watched TV," Oliver said.

"Is science bullshit?" Oliver asked. "No, but there is a lot of bullshit currently masquerading as science." To make that point clear, the host showed how conflicting the results can be for a single topic: coffee.

"In just the last few months, we've seen studies about coffee that claim it may reverse the effects of liver damage, help prevent colon cancer, decrease the risk of endometrial cancer, and increase the risk of miscarriage," Oliver noted. "Coffee today is like God in the Old Testament: It will either save you or kill you, depending on how much you believe in its magical powers."

The problem with a lot of these studies, as Oliver detailed, is that they can be biased depending on who funds them. A lot of research is rarely replicated in further studies and can often be dumbed-down in press releases and flashy headlines for the media. As such, studies can show the same types of foods and drinks both increasing and decreasing your risk of cancer.

Thankfully, Oliver presented a solution to appease the scientific community and those of us attracted to the flashy headlines. TODD (Trends, Observations, and Dangerous Drivel) Talks, which mimic the style of TED Talks, but presents them with the "intellectual rigor of morning news shows."

Check out the full segment below.