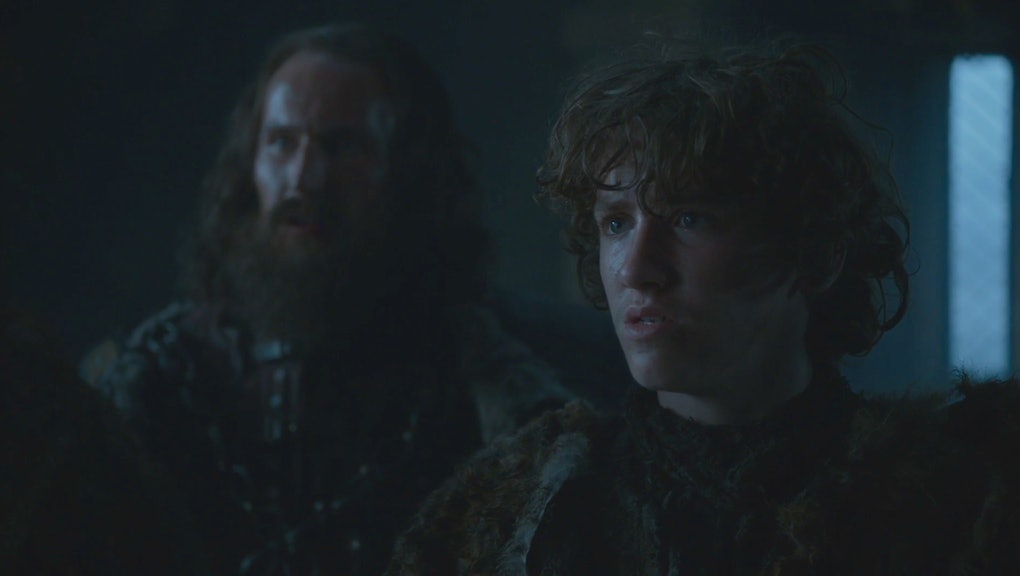 (Editor's note: Major spoilers ahead for the sixth season of Game of Thrones.)

The name of the third episode of season six, "Oathbreaker," couldn't have ringed more true. We had Jon Snow break his vow to the Night's Watch after executing the leaders of his assassination — though one could also say his watch really did end once he was killed, and has a new lease on life. But really, the "Oathbreaker" mantra belonged to House Umber, for handing over Rickon Stark and Osha to the Warden of the North, Ramsay Bolton. Yikes.

If you didn't immediately recognize Rickon when he was revealed, that's fair. In fact, the show plainly reminded its viewers of his existence during Arya Stark's Daredevil-esque training montage, in which she was asked by the Waif to list each member of her family. The youngest Stark has been offscreen since the end of season three, when he parted ways with Bran, Hodor and Jojen and Meera Reed.

While Bran and Co. headed north of the Wall, Rickon and the wildling Osha were supposed to head to the Last Hearth, home of the loyal Stark bannermen, the Umbers. As Bran noted before they separated, if anything were to happen to him or Robb (and know what happens to the latter), Rickon would be the heir to Winterfell.

Read more: 'Game of Thrones' Finally Addressed Its Biggest Twist — Where Does the Show Go From Here?

Since Rickon hasn't been seen on the show since, it's hard to say definitively what happened to him and Osha on their way to the Last Hearth. It seems likely they were accepted by the Umbers, and frankly, it would've made sense: The Umbers are one of the most loyal houses to the Starks in the north.

Case in point: This is the same house where its leader, Greatjon Umber, questioned Robb's military tactics for not allowing him to lead a vanguard, and then whether he would march south with him. (It's important to note that during this conversation, Robb labels the house as oathbreakers if they weren't to follow him). When Greatjon draws his sword during the argument, Robb's direwolf attacks him, and rips off two of his fingers.

"My lord father taught me it was death to bare steel against your liege lord," Robb said. "Doubtless, the Greatjon only meant to cut my meat for me."

"Your meat ... is bloody tough," Greatjon replies with a grin. From that scene, Greatjon was one of the leading figures in rallying the north with Robb — and later in the season, he was the first to declare Robb the King in the North.

This is partly why the Umber betrayal angered the Game of Thrones fan base on Twitter. That, and the fact that Greatjon's son, Smalljon, presented Ramsay with the decapitated head of Rickon's direwolf, Shaggydog, as evidence that he is of Stark lineage.

As for Rickon, this obviously doesn't bode well. He's now at the sadistic mercy of Ramsay, who has already raped his sister and castrated Theon — we don't even want to know what he has planned for him. Thankfully, however, there are two scenarios in which Rickon can get out of harm's way.

The first is through the huge, understated plot in the show that is more apparent in the books; that the great northern houses are conspiring against the Boltons. The Umbers appeared to be one of the houses that were in on the act, and if so, could mean their handing over of Rickon was part of the elaborate ploy.

The second is more straightforward, though it can still tie into the first. Jon seems intent on leaving the Night's Watch, and could march for Winterfell in the highly anticipated "Battle of the Bastards" between Jon and Ramsay — perhaps with Rickon as the catalyst for this fight. Jon would need northern allies to take on the Boltons, and in the process, could save Rickon from a lifetime of torture if he kills Ramsay (which we'd all love to see).

In the meantime, however, Rickon and Osha will have to make due in Winterfell, under Ramsay. Fans will certainly hope they stay safe in his psychotic presence. A strong piece of advice: Don't follow him into the kennels.