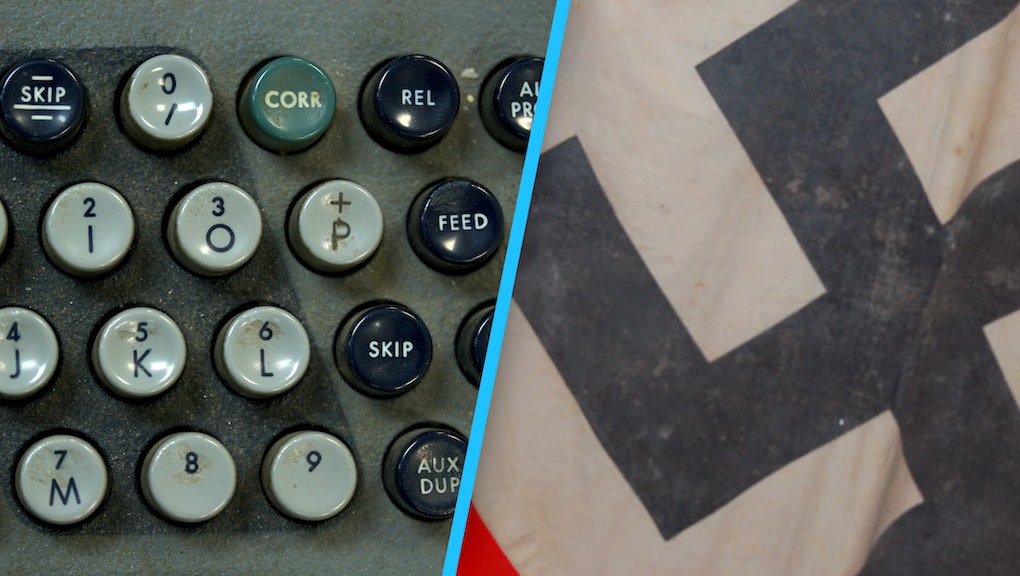 In Hitler's Germany, it's said, the trains to the death camps ran on time. What goes unsaid is why they worked so efficiently, transporting Jews between ghettos and concentration camps on a tight schedule: They were powered by IBM.

Although dozens of companies, such as Coca-Cola and Kodak, made clients of Nazi Germany, a few American multinational corporations stand out for going the extra mile. They didn't just sell tools and products; they collaborated with the Nazis in creative ways to help them design and execute the systematic destruction of the Jewish people.

Ford and GM are often cited for manufacturing vehicles and weapons for the war effort, but tracking people, trains and logistics was in IBM's hands. In fact, the IBM Hollerith machine, a tabulating machine that ran on punch cards, was an essential tool for executing the logistical challenges of the Jewish extermination during Hitler's regime in a world before computers.

It was a part of Holocaust history that faded into history — until 15 years ago, when a man named Edwin Black brought it to light.

Black is the author of IBM and the Holocaust, a 2001 bestselling book that was written in secrecy and released at the same time that a class-action lawsuit was filed against IBM on behalf of Holocaust survivors. Black has done the lion's share of scholarship and writing on this subject, including many articles written in the mainstream press.

The book was criticized for being inflammatory and full of hyperbole, containing exaggerations like "eventually, every Nazi combat order, bullet and troop movement was tracked on an IBM punch card system." Black went back and forth in the pages of BusinessWeek and the New York Times with reviewers who said that as good as his research was, his accusations were too full of bombast to be taken with full seriousness.

In person, Black is conspiratorial. He said in a phone interview that the information age wasn't launched in Silicon Valley, but in Hitler's Germany, and that IBM, the good old "solutions company," was responsible for the Final Solution itself.

Despite Black's firebrand ethos, his meticulous research has uncovered tens of thousands of documents, culled together from across Europe, that carefully show how IBM didn't just provide technology to Hitler's Germany — it helped implement and maintain it for whatever purposes the Nazis required.

The "solutions company" and the Final Solution

The Holocaust had six stages: identify the Jews, isolate them, exclude them and seize their assets, put them in ghettos, deport them and, finally, exterminate them. According to Black's research, IBM Hollerith machines had a part in each one.

IBM's machines tabulated and tracked census information in order to identify Jewish populations across Europe. Hollerith machines tracked the coming and going of passenger and freight trains, and managed the populations of the concentration camps. The numerical tattoo inked on the arms of Auschwitz prisoners? It was originally an IBM identification number used to track that prisoner in the punch card system.

A common strategy for global corporations to exonerate themselves from Nazi ties is to claim they'd lost control or influence over their German offices and subsidiaries. Ford and GM claimed as much in the 1990s.

But the machines IBM leased to the Germans weren't simply sold to the Nazis; everything was leased and regularly maintained by IBM technicians, some of who serviced the tabulation machines biweekly on-site at the concentration camps. IBM chairman and CEO Thomas Watson, who visited the Third Reich multiple times and dined with Hitler, approved the construction of a Europe-wide school for Hollerith technicians who could implement and maintain the machines, which ran on proprietary punch cards made on special paper.

The machines could not have managed the affairs of the Third Reich up until the mid-1940s without the support of IBM's American offices.

Likewise, archived documents from Ford and GM showed that American managers oversaw military manufacturing at German plants while denying calls from the Roosevelt administration asking them to set up American plants.

Ford and GM, however, apologized for their Nazi affiliations. They've contributed to charitable funds, opened up their document archives and made public statements acknowledging their responsibility and apologizing.

IBM should own its role in the Holocaust

That IBM worked so closely with the Nazis is a feature of Holocaust history that's quickly fading into obscurity. News articles about IBM and the Holocaust and its findings have tapered off, and coverage from the early 2000s is becoming the stuff of internet archives — available only to those who go looking for it.

With the slow degradation of historical memory comes the diminished pressure for IBM to take any responsibility for its cooperation with Hitler's regime.

IBM's one statement from over 15 years ago easily condemns the Holocaust without taking any responsibility, saying that the German arm of the corporations fell into the hands of the Nazis and that most of the documents are lost.

The statement makes reference to an honorary medal Hitler awarded to Watson, which Watson later returned. But Black unearthed documents in 2012 showing that IBM's New York office continued to direct and manage the assets of IBM's German subsidiary afterward.

Mic reached out to over half a dozen IBM representatives for comment or clarification on Black's assertions and the relationship between IBM and the Third Reich, without response.

IBM is hardly unique in its relationship to Nazi Germany, and the 1940s are a small part of the long history of American corporations cooperating with state actors during wartime. Wherever there is war, there is an opportunity to profiteer from capital and industry.

Even today, internet corporations like Facebook and Google contend with both resistance to ubiquitous government surveillance and the fact that these companies created and commodified the very tools that enable the modern surveillance state to flourish.

This is why holding corporations accountable for their sponsorship of wars and war crimes is vital. Multinational business interests have to bear the weight of their legacy, and in the global history of capitalism's relationship with warfare, fascism and surveillance, sometimes all we can eke out of our corporations, if not reparations, is a simple apology. Black believes we're overdue for one from IBM.

"This is a duty that they have," Black said. "IBM should take a cue from its Nazi clients and apologize, give up its documents and move on."