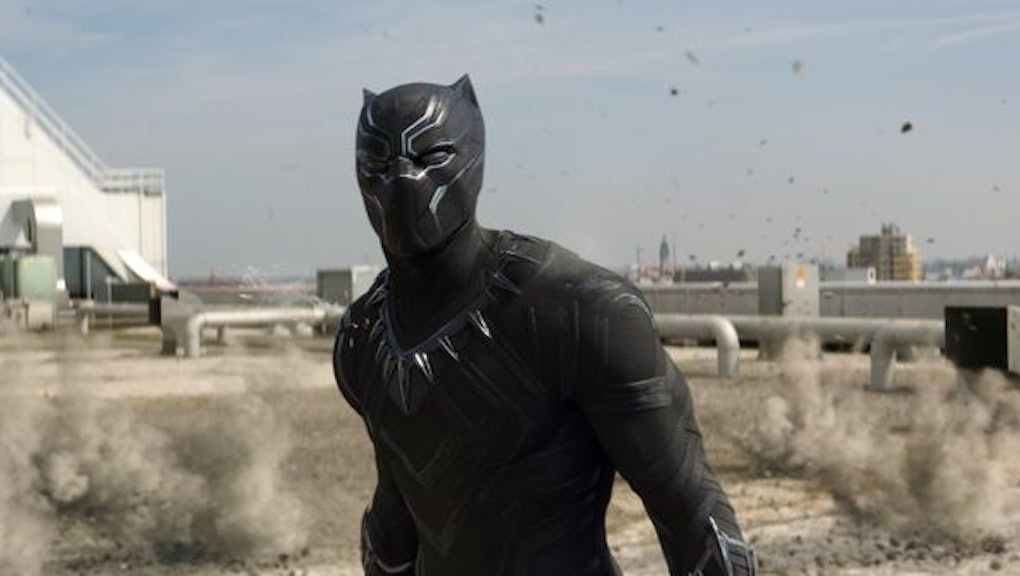 If there's one thing all critics can agree on with Captain America: Civil War, it's that the film doesn't short-change its audience of superheroes.

Along with the plethora of Avengers we've already come to know, Civil War had the arduous task of introducing a new Spider-Man (Tom Holland) and Black Panther (Chadwick Boseman) with enough backstory to make us care while not deviating from the main plot of the film: the ideological conflict between Captain America (Chris Evans) and Iron Man (Robert Downey Jr.).

Marvel succeeded and then some; in fact, Black Panther manages to steal the show. Their execution of the character was pivotal for two reasons. It brought the necessary hype for his upcoming standalone film (to be directed by Creed's Ryan Coogler). But more importantly, the studio showed deft storytelling for the comic-book world's first major black superhero — a moment they couldn't afford to mess up.

Black Panther, as played by Boseman, is T'Challa, prince of the fictitious African nation Wakanda. It's a technologically advanced country, having been built on a surplus of the fictitious metal vibranium — the same indestructible stuff that comprises Captain America's shield. T'Challa accompanies his father, King T'Chaka (John Kani), to a United Nations conference for the signing of the Sokovia Accords, a document establishing an international governing body to control the Avengers' actions. During T'Chaka's speech, a bomb detonates and kills him, leaving T'Challa equal parts devastated and angry. With Bucky Barnes (Sebastian Stan) — aka the Winter Soldier — identified as the presumed culprit, he vows revenge.

It's during the hunt for Barnes that we're introduced to his superhero alter ego: the Black Panther. Per the comics: T'Challa assumes the spiritual mantra of Black Panther after making contact with Bast — the panther God worshipped in Wakandan culture — who transposes the superpowers to T'Challa. The powers themselves, as seen in Civil War, are similar to those of Captain America: superhuman strength and senses, which Black Panther couples with a set of vibranium-tipped claws and a vibranium-coated suit.

Fantastic fight scenes aside, T'Challa's character arc in Civil War is the most complete, and layered, of the many heroes. Part of this hinges on how the rest of the heroes are divided between Team Iron Man and Team Captain America — the former in support of U.N. control of the heroes, the latter valuing the heroes' independence. Not much time is dedicated to explaining why the rest of the heroes choose their sides, which is permissible, given that Civil War has to balance the central conflict with the introduction of two new superheroes and a mysterious villain.

On the surface, yes, Black Panther is on Team Iron Man. But his independent hunt of Barnes makes him more of an ideological ally for Captain America, as it goes against the Sokovia Accords in question. Moreover, as the new monarch of Wakanda — a very private, independent country — he holds responsibility not just for his own actions, but also the interests of his people. He's not just a man with superpowers; he's a ruler.

He also serves a crucial, and understated, role in Civil War's climax. He confronts the film's villain, Helmut Zemo (Daniel Brühl), who reveals that he has been pulling the strings throughout the movie, including detonating the bomb that killed T'Challa's father. Seeing the parallel between Zemo's quest for vengeance and his own, he ends his quest for bloody retaliation and brings him into custody. As such, he finishes Civil War as a complete hero and monarch, one that begins with a mindless quest for revenge, but ends with a fully formed understanding of justice.

This knowledge should serve him well during his standalone Black Panther film, as it will likely delve further into the politics of his native Wakanda, which was shown only briefly in a mid-credits scene. The exciting possibilities of exploring a new country and culture in the Marvel Cinematic Universe aside, Black Panther's role in Civil War was Marvel's first true success with a nonwhite superhero in a leading role — all the more important given the character's historic legacy.

That he is the first lead black hero, however, is certainly an indictment for the franchise. Such a lack of diversity stems from the movie industry as a whole, not just Marvel films. As a 2015 study from the University of Southern California's Media, Diversity and Social Change Initiative discovered, roughly 73% of characters in films from 2007-2014 were white. Yet, juxtaposed with the fact that racially diverse films and television are more financially successful, it's a decision that does more than just disappoint an underrepresented fanbase.

Thus it isn't surprising that Marvel had planted the seeds for a Black Panther comic book revival in anticipation of his appearance. National Book Award winner Ta-Nehisi Coates is currently working on an 11-issue Black Panther series, with the first issue having dropped in April. They're not just reinvigorating the character for the sake of entertainment; the purpose is to introduce a new generation to a superhero of color.

"Black Panther is a historic opportunity to be a part of something important and special, particularly at a time when African Americans are affirming their identities while dealing with vilification and dehumanization," Black Panther writer Joe Robert Cole said in an interview with Mother Jones. "The image of a black hero on this scale is just really exciting. When I was a kid, I would change superheroes' names: Instead of James Bond, I was James Black. Instead of Batman, I was Blackman. And I have a 3-year-old son. My son will be 5 when Black Panther comes out. That puts it all into perspective for me."

Civil War is a major financial and critical success for Marvel. Many will point to its execution of the emotional conflict between Captain America and Iron Man, whose beliefs are both justified. But Black Panther proved a more important notion: The studio can create a compelling narrative for a black superhero. Now it's time to let him take the lead.