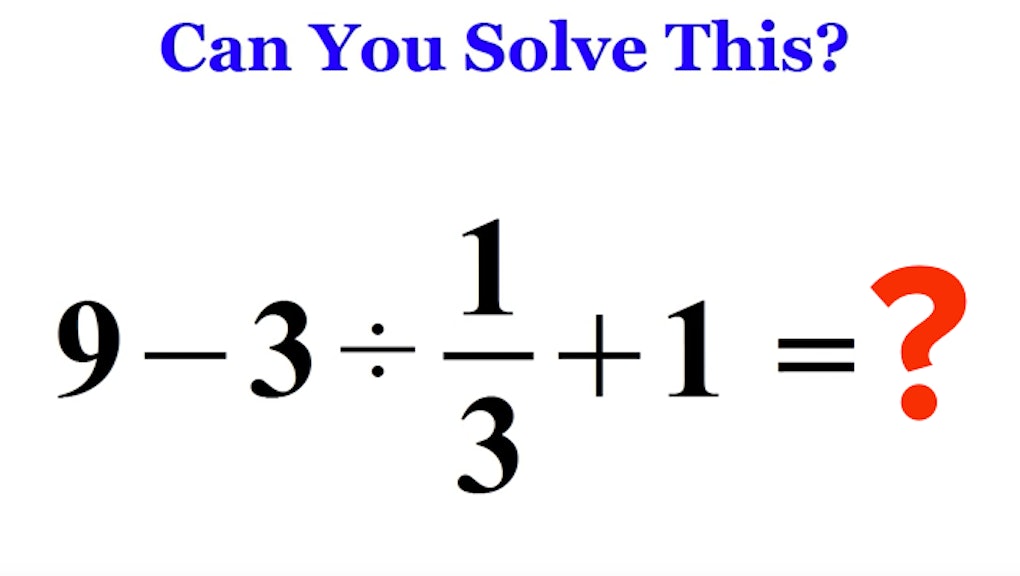 This Math Problem Is Stumping the Whole Internet. Can You Solve It?

You probably think you're smarter than a middle schooler. If you want to know for sure, try your hand at this basic math problem. It's harder than it looks — even if you think you have a solid grasp of good old PEMDAS.

The problem originally went viral after a research group in Japan reportedly found only 60% of people in their 20s could solve it correctly. Before you look up an explainer video — like this one by Mind Your Decisions — give it a shot:

I wasn't confident enough to try, so I emailed a math professor.

It's easy to screw this up

It's easy to see how people get a wrong answer, said Matthew Zaremsky, who teaches mathematics at Binghamton University. It turns out PEMDAS is to blame.

It may have been 10 years since you took a math class, but surely you remember the acronym that holds the key to solving basic math: "Please Excuse My Dear Aunt Sally," or "Parentheses, Exponents, Multiplication, Division, Addition, Subtraction." Throw this out the window.

What if you got something totally different?

Totally understandable. "Even the most PEMDAS-confident reader could be subject to an insidious psychological element: seeing a 3 and a 1/3 next to each other induces a primordial urge to combine them into a 1," Zaremsky explained.

"Yes there is a division symbol between them, and 3 divided by 1/3 is 9, but anytime a 3 and a 1/3 are sitting so close to each other they're just begging to be multiplied, to get 1. There's even a 1 sitting over to their right, taunting you into thinking about ones."

Don't do this! You'll end up with 9 — a common, equally incorrect result.

Here's how to do it right

"PEMDAS shouldn't always be blindly followed," Zaremsky said. "Despite addition coming before subtraction in the helpful acronym, one actually needs to subtract the middle term before adding the 1 at the very end."

"Once you simplify things to '(9 minus 9) plus 1,' things should become much less controversial," Zaremsky said.