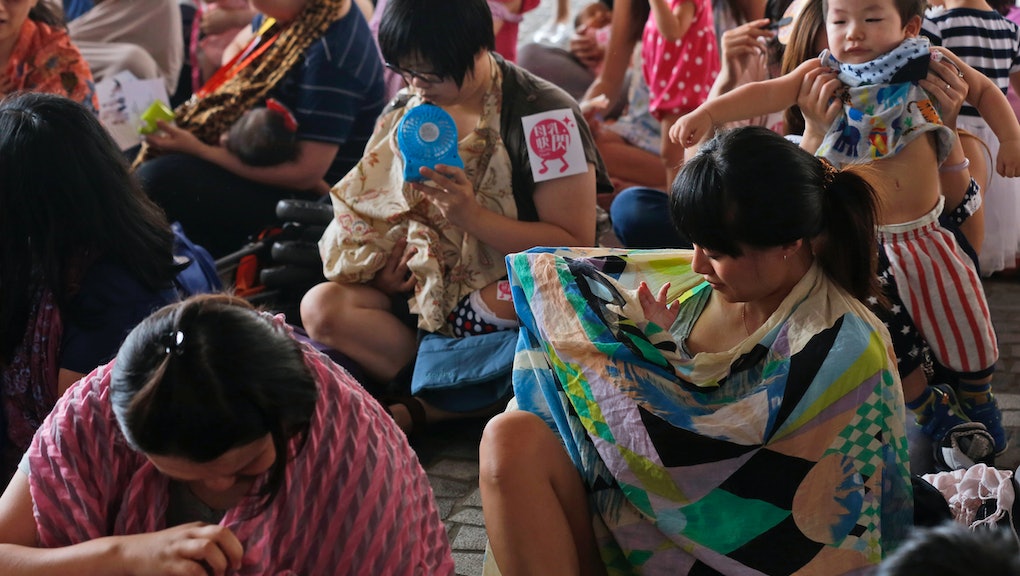 These Hong Kong Moms Fought the Patriarchy By Breastfeeding In Public

If you're a mom who's ever breastfed in public, you've probably dealt with stares, side-eyes and passive-aggressive comments from strangers. But a group of mamas in Hong Kong have had enough of breastfeeding-shaming — and they're taking a stand against it.

According to a survey by the Hong Kong Committee for the United Nations Children's Emergency Fund (UNICEF), 40% of mothers who have breastfed in public have had a "negative experience," ranging from strangers telling them to go do it elsewhere to people stopping them in their tracks and complaining.

Last Saturday, the nonprofit MamaMilk Baby Alliance organized a breastfeeding flash mob, in which 100 mothers breastfed en masse outside the Tai Wai metro station. The gathering of proud mamas was part of the community's annual protest against breastfeeding shaming, in which mothers feed their kids on or near public transit.

Although the World Health Organization and UNICEF have published reports attesting to the importance of mothers breastfeeding their babies, women around the world still face discrimination when breastfeeding in public. An American public opinion survey in 2001 found only 43% of U.S. adults believed that women should have the right to breastfeed in public places.

This global stigma hasn't dwindled over the past decade. Last month in the United Kingdom, a businesswoman who opened a cafe for breastfeeding families was subject to extensive harassment. In the aforementioned Hong Kong survey of over 3,540 mothers, 77% of those who answered they don't ever breastfeed in public because they are concerned about public reaction and embarrassing their loved ones.

In response to breastfeeding-shaming, local female celebrities have published their own personal breastfeeding photos, from food bloggers to pop singer Ella Koon, who also promoted the weekend protest on her Facebook page.

Moms banded together this weekend in Hong Kong to fight breastfeeding stigma. They called the event a 'Mama Flash,' or a flash mob of proud breastfeeding moms.