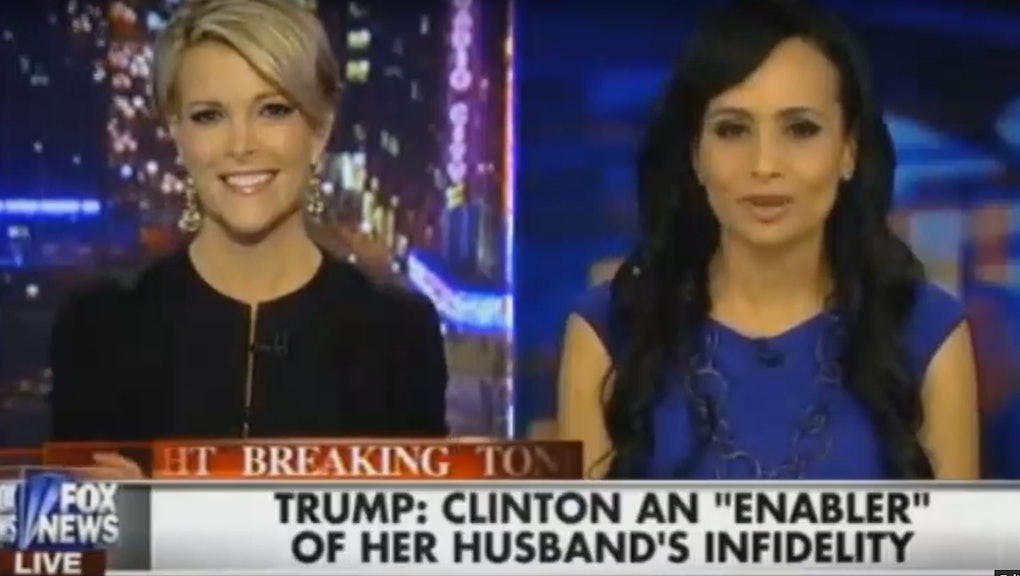 A key Donald Trump staffer wants everyone to know that the presumptive GOP nominee criticizes men and women equally.

Trump national spokeswoman Katrina Pierson — the same campaign employee who wears a bullet necklace and once called for a "pure breed" president — defended Trump's use of the term "bimbo" on Monday night's edition of The Kelly File.

Host Megyn Kelly, who Trump once mocked with a reference to menstruation, asked Pierson why the candidate keeps on using sexist language to demean women. In particular, she wanted to know why the billionaire has attacked female opponents' physical appearance.

"Trump has criticized men, too, who have criticized him, this criticism isn't reserved for women and I think that's the difference," Pierson responded.

"What about the word bimbo?" Kelly asked.

When Kelly asked Pierson whether the word was sexist, the spokeswoman responded by seemingly conceding that even if it were, Trump is an equal-opportunity offender.

"Well, even if it is sexist or not sexist, depending on how you perceive it, the point is, he doesn't reserve criticism for women, that's sexism, that's misogyny," Pierson shot back. "If someone criticizes him, he criticizes them, it's equal, it's not just one-sided here, I think that's the point."

"The point they're trying to make is that there's a particular tone and a particular choice when he's going after women, versus the men," Kelly responded. "That's what they're going to be saying."

Pierson concluded, "That's what they're gonna say, but history is going to show that's simply not the case."

According to Mediaite, Trump has used the term "bimbo" four times on Twitter, each time referring to Kelly.

Pierson may be right that Trump's rhetoric has offended just about everybody. But his team may find it increasingly hard to keep a lid on the candidate's spiraling unfavorability ratings among women, seven out of 10 of whom said they had a negative opinion of Trump in an April Gallup poll.

Read more: The GOP Pretty Much Made Hillary Clinton's Donald Trump Attack Ad for Her