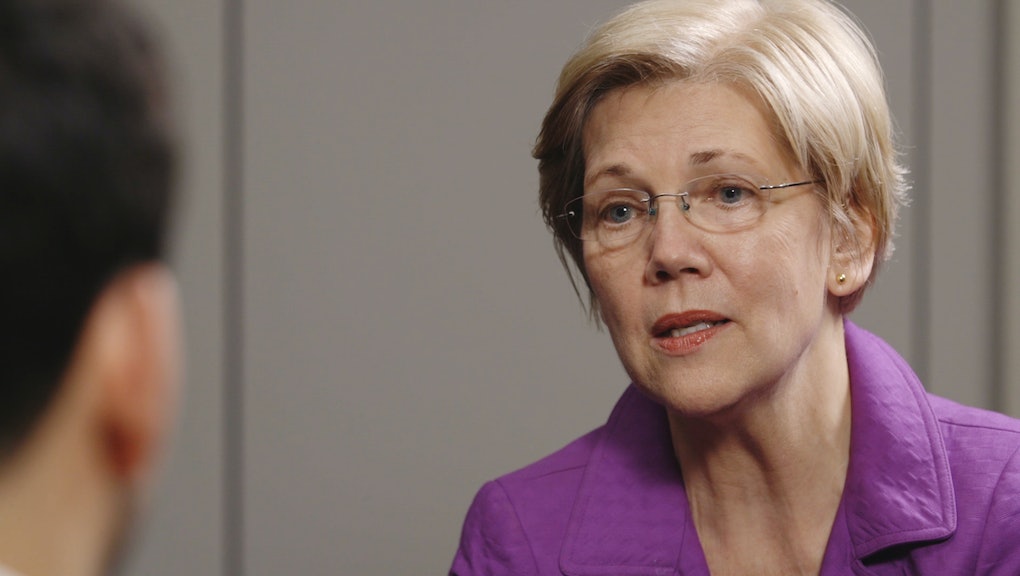 On Tuesday, Mic sat down with Democratic Sen. Elizabeth Warren of Massachusetts to discuss student debt, her Twitter feud with presumptive Republican nominee Donald Trump, her thoughts about being Hillary Clinton's running mate and more.

Watch the full interview below, followed by a transcript of her conversation with Mic senior staff writer Zeeshan Aleem:

Mic: So, I want to start by talking about the student debt crisis. Today, there are over 40 million Americans who have about $1.2 trillion in student debt. What do you think is the best way to help borrowers who are struggling the most with paying off their loans?

Elizabeth Warren: OK, for openers, the United States Congress should refinance student loan debt. To just bring down, at a minimum, bring down the interest payments on those loans. You know, this is what's really appalling is it's set up right now so that the United States government makes a profit off the backs of people who have to borrow money to go to school.

And I'll just give you one example of that. After you account for the bad debt losses and the cost of the funds and the administrative cost — just one section of loans, the section that went out between 2007 and 2012, we just happen to have good numbers on these — are now on target to produce $66 billion in profits for the United States government.

Well, making college affordable again is a major issue on the campaign trail this year. Bernie Sanders has offered a plan for free tuition at public colleges, and Hillary Clinton has talked about how to reduce the cost of college. Who do you think has a better plan for students?

EW: So, let me start this way, and that is: Listen to the debate on the Democratic side. We're talking about, "Should it be free college or debt-free college?" That's where we're going back and forth and trying to have a conversation — how are we going to pay for it, how do the pieces work to make that happen.

Can we just draw the distinction about what it looks like on the other side of the Grand Canyon, where the Republicans are not talking about how to reduce the cost? We've got a guy right now who's the nominee who runs Trump U, which — at least if you read the lawsuits against it — was just out there to try to rip off students. We've got a Republican Party that consistently blocked refinancing any of the student loan debt. This is the big difference.

My view on this is Democrats are committed to getting down the cost of college, and that means both on student loans for those who've already got them, and it means on the cost going forward for anybody going to college. The Republicans, on the other side, their basic view is, "You're on your own." And by the way, with the fraudsters out there, watch out.

Well, do you think the way that Trump has handled Trump University makes him unqualified to be president?

EW: I absolutely think it makes him unqualified. Look, here's a man who looked around and said, "What are the profit opportunities? I know, let's get out there and pretend to run a university that's going to tell people how to engage in real estate transactions to make lots of money. Let's make lots of representations about what that university is going to do and who the faculty are going to be and what it's going to cover. And then, once we get their money, let's not deliver."

That's the kind of thing that says, "You know, I'll get out there, and everything is about Trump, how to make more money for Trump." And the fact that people who are trying to make something out of themselves or trying to get an education get cheated? Heck, that's just so much dirt beneath his feet.

How does that reflect on how he would run the economy?

EW: I think what Donald Trump has demonstrated over his entire career is that it's all about Donald Trump. If it's good for Trump businesses, then that's what he's for, and if it's not good for Trump businesses, then he's not. And I just got to say, that's not what public service is about, that's not what government is supposed to be about. If you want to ask about the single most serious problem we've got in government right now, it's who it works for.

Well, last week you got in a pretty big Twitter spat with Trump actually, and you had said that he had a dangerous vision for America. What do you think America will look like under a Trump presidency?

During that exchange, he also called you goofy. What went through your mind when he said that at first?

EW: Really? That's the best you could come up with? Come on. I thought Donald Trump said he was a guy that was good with words.

Well, in recent weeks, you've really emerged as one of his most vocal critics, and you've really gotten under his skin. Why do you think that is?

EW: I don't know if it's that Donald Trump is not used to people who stand up and challenge him, and I don't mean on silly stuff, or on personal stuff. This is really about the issues he's put on the table and talking about him — you know, Donald Trump got out there, his sole claim to fame on why it is he would be a great president is he's such a great business man, right? That's the basic story. Well, OK, so I think we should take a close look at that.

I think he's actually a lot weaker than he wants to admit.

Is he a great businessman? He's a guy who inherited millions of dollars from his father, and then he managed to expand that by defrauding students through things like Trump University and cheating others by declaring Chapter 11 and not paying his creditors. You know, there are some people who analyzed the portfolio that he's got and say, "Shoot, if he'd just taken the money he inherited and invested it in the stock market, he'd have more money today than he has through all of his investments."

So, I think this is just kind of coming back at Donald Trump and saying, "This is what you said, we want some accountability on that." I don't think that's where Donald Trump wants to be, the idea that he has to be held accountable, I don't think he likes that. I think he's actually a lot weaker than he wants to admit.

So you think this is all out of insecurity?

EW: You know, he just doesn't want to have to defend what he actually says. A strong person will get back up with their own numbers and have a back and forth. You talk about your data, I'll talk about my data and we'll put it out there, we'll talk about the issues, we'll make coherent arguments — but not Donald Trump.

He's immediately got to pivot and say, "Oh, name calling. I've got to find a name to call someone," because he sure as heck doesn't want to talk about the issues. He doesn't want to have to be held accountable for what he's said.

So if Hillary Clinton came to you and said, "I need you to be my running mate in order to take on Donald Trump," would you say yes to that?

EW: Right now, I just want to be clear: I love my job. I'm here in the United States Senate doing exactly what the people of Massachusetts sent me here to do. I'm in the thick of the fights to try to level the playing field, to try to un-rig this system and that's what really matters to me. That's where I'm headed.

So, would you rule out the possibility?

EW: You know, this is something that right now, we've got to get all of our nominations settled on the Democratic side. For me, I'm going to keep doing my job every single day and I'm not thinking about another job.

And have you spoken to Clinton recently at all?

EW: No, not recently.

OK. What impact do you think that Bernie Sanders has had on the Democratic Party?

EW: Oh, he's put forward the arguments about what it means to be a Democrat.

I mean, just watch what the Democratic debates have been about and how they have drawn the contrast with the Republicans. So what have the Democrats debated?

"Should we have free college or debt-free college?" But all Democrats are saying we need to reduce the cost of education for our young people.

"What's the best way to rein in the excesses of Wall Street? Is it dealing with the non-bank financial institutions or breaking up the big banks?" But all Democrats agree we need better control over Wall Street.

These are the kinds of debates we have had because we've had two candidates in there fighting hard, and it has truly shown the gulf with the other side.

So I think that what Bernie has done, and this whole Bernie and Hillary process, has been to really draw the distinction between what it means to be a Democrat and what the Democrats and what the Republicans are out there standing for, and I've got to say: I'm proud to be a Democrat.

One last question, if Bernie Sanders doesn't win the nomination, Trump said that he would target Sanders supporters. Do you think he'd be able to pull that off?