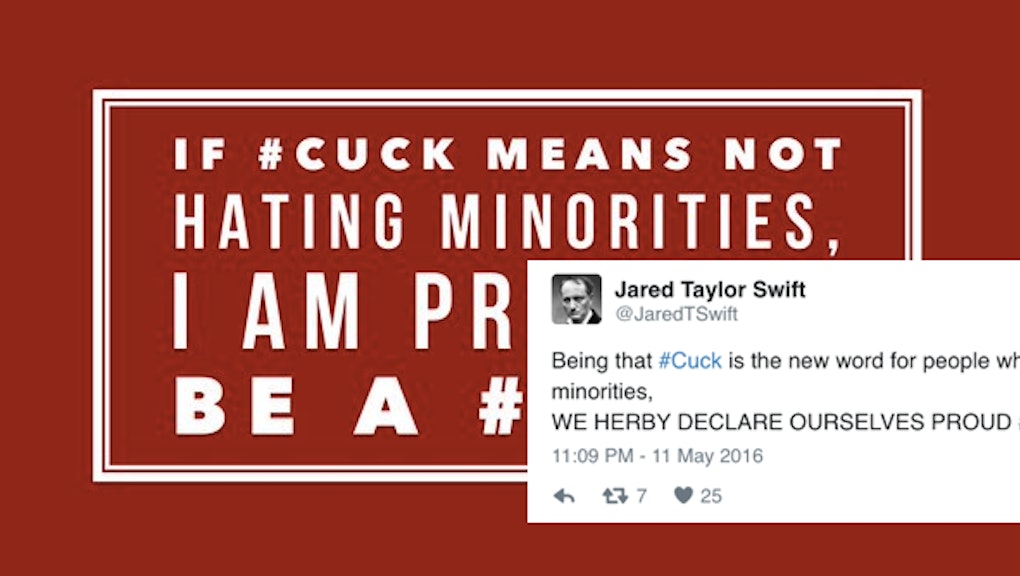 A vocal group of Republican voices and leaders will not support presumptive GOP nominee Donald Trump. In response, the pro-Trump crowd is trying to discredit and humiliate them by any memes necessary.

The alt-right — a rising contingent of young, mischievous conservatives that embrace Donald Trump, Gamergate, nationalism and anarchic online forums like Reddit and 4chan — is attempting to goad traditional Republicans into embarrassing themselves by sharing deceptive image macros.

Specifically, they want anti-Trump conservatives to identify themselves as "cucks."

The trolls were successful. On Tuesday evening, Stop Trump PAC, a conservative group dedicated to stopping Trump from clinching the nomination, took the baton from alt-right memesters and ran with it:

The @StopTrumpPAC account deleted the tweet after a few hundred retweets, but the humiliation was complete — a victory for an online band of conservatives who relish in trolling. However, even if this looks like the mischief of online forum-dwellers, it speaks to a larger battle for the soul of the Republican party.

It looks like the mischief of online forum-dwellers — but it speaks to a larger battle for the soul of the Republican party.

What "cuck" means in 2016: The alt-right uses cuck or "cuckservative" as code for "race traitor," labeling conservatives who disavow their party's radical fringe as beta males who've let their household be overrun. The term "cuck" frames social justice in terms of dominance, evoking traditionally racist and colonial panic about black bodies and implying that African-American men pose a violent and sexual threat to white women and white households.

This attempt to humiliate dissenters is part of the ongoing struggle for the core values of the Republican party, and those tensions are mounting as the Republican nomination approaches — and as establishment Republicans either stand fast in their refusal of a Trump candidacy, or join ranks.

If "cuck" means someone unwilling to compromise their morality or humanity for the sake of winning an election, maybe the #NeverTrump Republicans should be proud to be "cucks."