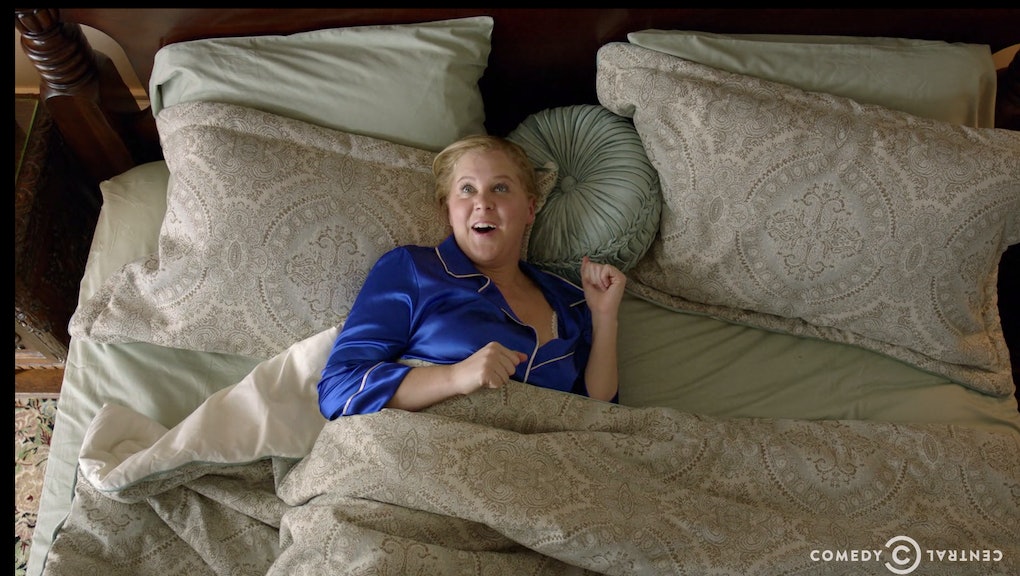 With former Secretary of State Hillary Clinton the likely Democratic presidential nominee, Amy Schumer wanted to prepare the American public for what could happen with our first female president on Inside Amy Schumer. That included playing up to our biggest irrational fear: a period on the first day in office.

The sketch starts with a Veep-esque opening, showing the headlines in which "Amy Schinton" has been elected as president. As Schinton wakes up in the White House, she's excited to have gained 200 Twitter followers overnight, but that excitement quickly turns into despair.

"I got my period on my first day?" she says to herself. "OK, OK, OK, you can handle this. It's not ideal for the first day. It's not amazing. But you can do anything. You're the president." Unfortunately, it all goes awry for the new POTUS during an emergency meeting about a situation in Iran.

"I'm sorry, but does anyone have any Advil?" she asks the room. "I just, I have epic cramps and my mind is like, mush, right now, if I'm being real."

The segment then cuts to various situations in which an equally embattled Schinton squabbles with her Cabinet, world leaders and a terrorist threat in the Situation Room, all while continuing to deal with cramps. However, the bit ends with Schinton being criticized in the media not for her leadership skills, but rather, whether POTUS is plus size — a nod to her controversial cover of Glamour.

You can check out the sketch, along with the rest of Thursday's episode, here.

Read more: Amy Schumer Grows a Beard, Pees Standing Up and Eats Trash to Relate to Her Man