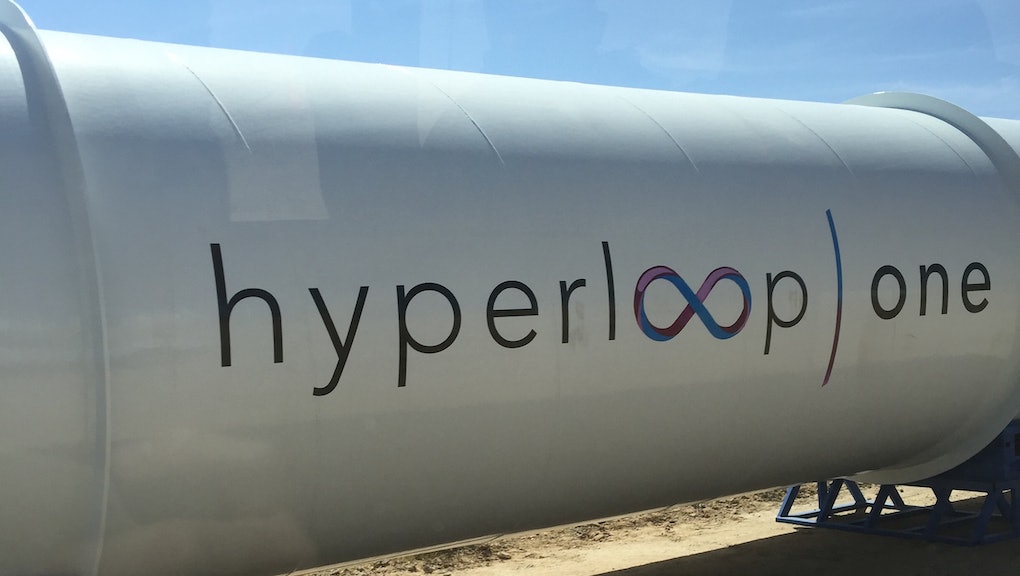 The One Problem With the Hyperloop That Nobody's Talking About

On Wednesday, crowds gathered in stands under a harsh sun to watch Hyperloop One propel a piece of metal down a track and into some sand at 120 mph. If this sounds a bit lackluster to you, your gut instinct would be correct: This was not a mind-blowing experience.

The Hyperloop is a transportation concept first popularized by SpaceX CEO Elon Musk wherein pods are jetted at over 700 mph inside a tube system. Hyperloop One is one of two companies building this futuristic system. The other, Hyperloop Transportation Technologies, is working on building a test site in California's Quay Valley.

The demonstration was just a small taste before the main event in December, when the company will reveal its technology in full. The propulsion test is a major first step in proving that this technology can be developed quickly and effectively. While the fanfare was certainly meant to excite the masses, the event seemed more like a waving of the flag for regulatory authorities, as if to say: Get ready, we're coming.

Approving new transportation technology — especially one that will eventually ferry humans — is an arduous task that could serve as more of an impediment to the Hyperloop than building the technology itself.

"This stuff didn't exist!" Hyperloop One CEO Rob Lloyd said enthusiastically in an interview. The company only set up shop in Las Vegas five months ago, and already its propulsion test is complete. If Hyperloop One is able to have its "Kitty Hawk moment" before the end of the year, legislators are going to have to contend with making these pod-shuttling tubes legal. In March 2017, Lloyd says that his company plans to start selecting the best routes and projects from Hyperloop One's global competition and begin building.

While the Hyperloop has lots of positive potential, it's still unclear whether it's actually something that the world needs and can afford.

We already have a lot of transportation infrastructure. Many of the places that could potentially afford a Hyperloop are fairly well-developed. Europe has an extensive rail network. Japan is know for its system of magnetic levitation trains. The United States is full of both freight-carrying and human-ferrying railways.

Where will we put a Hyperloop?

Lloyd acknowledges that there is a lot of existing infrastructure. "The world is full already and our cities are jammed. So there are almost no alternatives; you can't build more roads in San Francisco, you try to improve them. We create these HOV lanes; they solve one problem, create another," he said. But he thinks that a Hyperloop will help alleviate problems for an already over-worn system.

"So the beauty of what we can do here is we can reuse existing right of way. We can jump on top of or go beside a rail line. We can sit inside the safety area of a highway," he said. "We can go in the LA river. We can go underground and completely bypass the surface, because our cost of tunneling is exponentially lower."

Fighting for funds. One of the main arguments for building a Hyperloop is that it will be cheaper to build than a new bullet train, which at current estimates is going to cost $64 billion. Though Elon Musk estimated it to be roughly $6 billion in a white paper explaining the Hyperloop, there isn't currently an available cost analysis for what a Hyperloop would actually cost.

Of course, once we know how much it will cost, we'll have to answer the question of whether we want to pay for it. As mentioned earlier, the world already has a lot of systems in place that need money too. On Friday, the American Society of Civil Engineers noted the U.S. is underspending on current infrastructure, estimating it should be spending $3.32 trillion ($1.44 trillion more than current spending forecasts allot) to keep things in order. Private organizations and governments are constantly debating whether to pay for a new system or upgrade an old one. With funding limited, it's not impossible that they'll decide it's easier to keep doing what we've been doing.

To that, Lloyd says:

"We're going to go where the regulators want to see us there and where they want to work quickly to create the environment so we can go to production. And where they don't want to do that we'll go somewhere else."