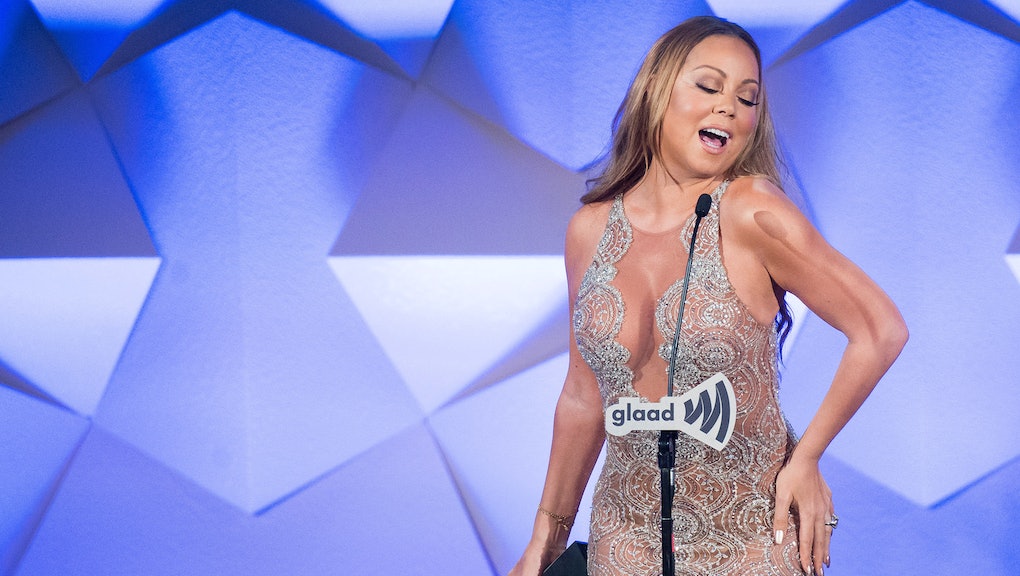 Mariah Carey accepted GLAAD's ally award on Saturday at the GLAAD Media Awards, being described as more than just a friend in the fight for LGBTQ equality by openly gay, Oscar-nominated director Lee Daniels; according to Daniels, "This bitch is one of us: to the marrow, bone."

After Daniels gave up reading from the teleprompter to instead tell personal memoirs of how Carey has touched his life, teaching him that he's so much more than just his sexuality, Carey thanked the director for changing her life as well. But it was her use of the teleprompter to ensure she didn't leave out any sexualities in her acceptance speech that really captivated the audience.

"I had to learn a whole new alphabet to introduce and not un-include people ... I don't want to do it wrong. I decided that if I have to memorize it, I might as well elaborate on it," Carey told the crowd. "So we have L: legendary. G: gorgeous. B: beautiful — all of you beautiful people! T: tantalizing, and even Q for quality!"

She ended her speech by thanking the LGBTQ community "for the unconditional love, because it's very difficult for me to have that. I haven't experienced much of it... I wish all of you love, peace, harmony, and as my five-year old son Rocky likes to say: boobies and butts!"

Check out Daniels presenting GLAAD's Ally award to Carey, as well as her acceptance speech, below: