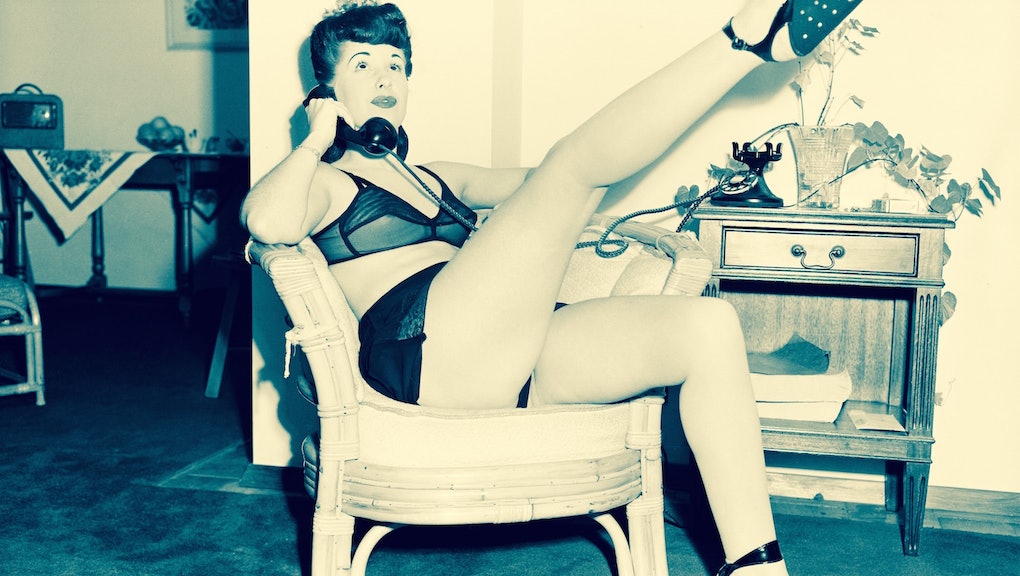 The Truly F*cked Up History of the Platform Shoe

The platform shoe is known for giving someone a certain kind of sex appeal and allure. Pamela Anderson is a fan, as is Lady Gaga and as was David Bowie. The platform shoe instantly elevates you and forces you to stand up straighter, to move your hips in a more deliberate swivel, and can magically make legs appear longer — something strippers have known for ages.

So it might be surprising to find out that, while the shoe itself is very sexy, it's got a terribly unsexy history.

Although they're considered some of the most lusted-after and edgy footwear prevalent today, they were once used for some pretty bizarre and even gross reasons.

In ancient Japan, platforms were used to avoid the mud and to attract suitors.

The first true platform shoes were worn to avoid sinking into the mud in giant rice paddies. In the Heian Period in Japan, which lasted until the 1100s, men would strap on "getas," or flat boards that had what were effectively wooden stilts attached to the bottoms.

As the years ticked on, the stilts became higher and higher, making them ideal for women to wear with their kimonos to keep them from dragging on the ground. Both men and women wore the shoes for hundreds of years (and some actually still do wear modernized getas), especially when it rained and the towns flooded.

But eventually, the platform wooden shoes took a more scandalous turn. While geishas were known to wear elevated shoes during their performances, oirans (or high-ranking prostitutes) took things up a notch and made their own signature getas that let everyone know their intention to seduce. Their getas were gigantic, some measuring more than 25 centimeters tall. Eventually, because of these women's wealth, the higher shoes started being affiliated with affluent women and oirans alike.

By the medieval era, platforms were used to avoid human feces.

Although the goddess Aphrodite has been depicted wearing super high heels in Greek temples, the first instance of European people wearing platforms came in the medieval era. In the 1300s, people in the Middle East would wear what were called "kabkabs," which were flat soles that basically had two stilts attached to the bottom to elevate a person's foot safely above water and hot surfaces.

Over in Western Europe and England, people would wear what's known as a "patten," and these pattens were effectively platforms made of wood or metal that could be strapped onto a woman's or man's shoe to give them a stilt effect while walking outside.

Why, pray tell, did they need stilts to walk on things like unpaved roads? Well, because those unpaved roads were basically paved with mud and dirt, and because plumbing wasn't a thing that happened, human and animal feces frequently lined the streets. Because of this, pattens were strictly outside shoes that a person could take off before walking inside their own home.

People lived in these conditions for hundreds of years. Even by the 18th century, pattens were worn by women because dresses had become much longer, and these stilt shoes helped women keep their hemlines out of the feces and urine.

Next time a person tries to muse poetically about the medieval era, please tell them this.

By the 16th century, they had evolved into a status symbol.

From the 1500s to the 1800s in Europe, the patten gave way to something called the "chopine," which looks more similar to the platform shoes we wear today, with Oxford-style detailing on top of an extremely elevated heel.

During this era, throughout Europe, shoes like this sent a very specific message. While the shoes did serve a practical purpose, it was much more of a status (and thus fashion) symbol. In Venice, which was akin to Las Vegas during this time, a courtesan's status was known via the size of their platforms, much like in Asia; the higher the shoe, the more powerful the person.

So, obviously, Napoleon became a fan, allegedly wearing a pair of chopines that neared 30 inches tall.

Over in England, William Shakespeare also came to use the shoes to signify the wealth of some of his characters, as well as to give height to the actors so that more people could see them from the back rows.

It would be a few more centuries before these shoes would come stateside. And when they did, we all got to find out the true gift offered by platform shoes: the illusion of wonderfully long legs. As opposed to high heels, platforms also offered comfort, with the platform supporting the ball of the foot and making the heel fell less extreme.

In the 1930s, Italian shoe designer Salvatore Ferragamo realized this and resurrected the platform, bringing them back after decades of being ignored by the fashion crowd. Given the economic struggles of the decade, he found that cork was actually cost efficient, so he began producing extremely tall heels with soles made of cork. Eventually, the shoes made it to America, where women like Marilyn Monroe realized that they could make her legs appear longer, as did Carmen Miranda, a dancer who actually made platform shoes her signature.

This is when, after nearly 100 years, men in the West could slip into a pair of platform heels once more. See: Elton John — and basically every man with very large hair who could play a guitar in 1973.

Meanwhile, women fully embraced heels' ability to add more edge to their sex appeal, pairing over-the-knee platform boots with miniskirts. Or, alternatively, they'd wear them with wide bellbottoms that swung as they danced until dawn at Studio 54, trying to effortlessly channel women like Diana Ross and Cher.

By the '90s, platforms finally got the girl power treatment.

In the '90s, platforms were synonymous with unbridled, screaming-at-the-top of your lungs girl power feminism, as exemplified by the Spice Girls. Even more specifically: Ginger Spice, with her red-white-and blue platforms, prancing on stage, throwing peace signs in every which direction while screaming things like "spice up your life" and "girl powah." Although many of the Spice Girls wore platforms, the shoes became signature part of Ginger Spice's attire.

The Spice Girls' influence saw the shoes' popularity spread from Chanel runways all the way to young women and teenagers, who were first able to get their hands on their own pair when they began springing up in teen outlets like Limited Too and in Delia's catalogues.

Even beyond the Spice Girls' influence, people who identified with the punk and goth movements embraced platforms for their intimidating look. Most of their shoes weren't red, white and blue, however, but pitch black.

By the 2010s, platforms became a closet staple.

With a history as long as that of the platform shoes, you'd think that we'd be tired of them by now — but that is simply not the case. Today they are everywhere: they are on runways; they are in malls; they are probably, actually, less than a mile from you in every direction at this very moment.

While they once indicated that someone was super into cocaine disco music in the '70s, or maybe even punk rock in the '90s, modern variations of the platform (which are admittedly more subdued than those of the '70s) are a normalized piece of clothing, and make few statements more complex than "I want to be taller."

So, class, what have we learned today? Never underestimate the power of a sexy shoe.