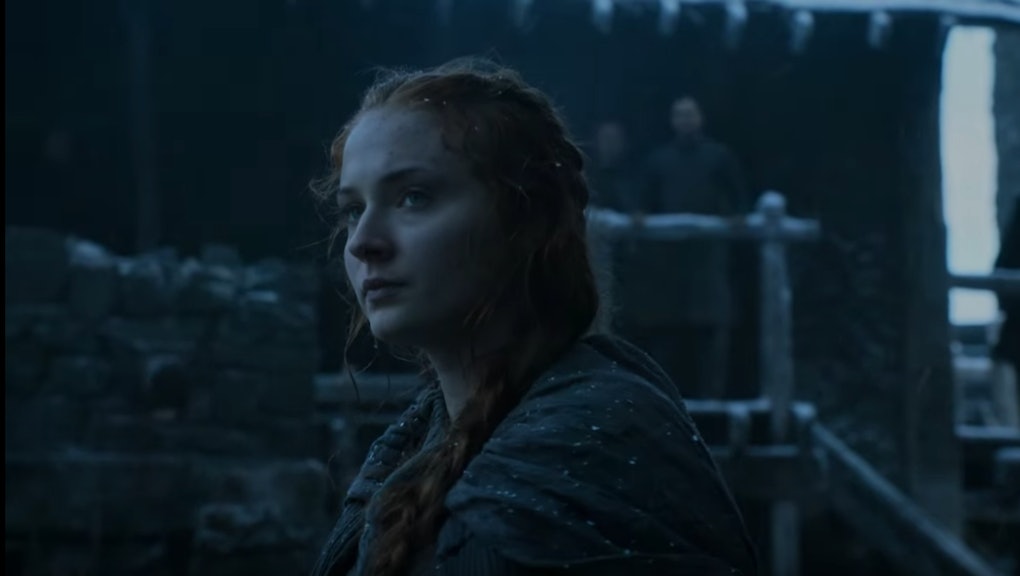 (Editor's note: Major spoilers ahead for the sixth season of Game of Thrones.)

Freeing itself from the books might have been the best thing for Game of Thrones. It has allowed the series to advance its plot at an unexpected-but-pleasant rapid pace. The latest episode, "Book of the Stranger" was no exception. Throughout the action-packed hour, Jon Snow gets ready to lead an army to Winterfell and take down the Boltons; the Lannisters and Tyrells join forces to stop the High Sparrow; Theon Greyjoy returns to Pyke to support his sister's claim to rule the ironborn; and Daenerys Targaryen becomes the presumed leader of the Dothraki following one fiery, fell swoop.

But the best part of this episode isn't merely that the narrative moves forward. All of these moments show what happens when women take charge in Westeros. If "Book of the Stranger" is any indication, perhaps the women should always run the show. Four story lines — and six women, in particular — make that case emphatically.

Sansa Stark: What the emotional reunion between Sansa and Jon Snow demonstrated is just how far the former has come as a character. In the earlier seasons of the show, Sansa spent the majority of her time at the mercy of horrific characters — namely her first betrothed, Joffrey. Now, when Jon wants to run away from the battles and the conflict, she urges him to take back their home, Winterfell, though she makes it clear she doesn't need his help if he doesn't comply.

It's also Sansa who is willing to read the disturbing letter Ramsay Bolton sends to Jon in-full. She cooly reads a description of her being gang-raped by soldiers, her brother Rickon being eaten alive by hounds and wildlings being flayed alive. In doing so, she helps earn Jon the support of Tormund and the wildlings, and we have reason to believe other Northern houses will follow their lead (she's aware of this, too). Clearly, Sansa isn't the damsel in distress coming to Jon for help, as her earlier character arc would've indicated. She's going to take back Winterfell, Ramsay, come and see.

Cersei Lannister and Margaery and Olenna Tyrell: While King Tommen mulls over on how to get Queen Margaery back from the Faith Militant, the real plan comes from the women in charge of Houses Tyrell and Lannister. Olenna and Cersei form an uneasy, but strong alliance in order to save Margaery and Loras Tyrell from being punished for their sins. Given how effective both women were at getting in each other's way — and, lest we forget, Olenna was one of the key conspirators in Joffrey's death — the alliance should prove quite useful.

Additionally, even in the dungeons of the Red Keep, it's Margaery who has to insist that Loras stay strong, as he breaks down crying in her arms. If they're going to remain steadfast in denying their guilt, it falls on Margaery's strength and not that of the highly touted knight.

Yara Greyjoy: With Balon Greyjoy's death at the hands of Euron Greyjoy, Yara is prepared to rule the ironborn. Even as Balon's daughter and a capable military leader on the seas, she's got long odds to rule, as a woman has never has. Theon's appearance at Pyke was unexpected, and initially Yara's assumption was that he would swoop in and claim it for himself, which is his right as the only living son of Balon.

However, it's Theon who admits to her that he's broken; all the torture from Ramsay has left him a shell of what he once was. She doesn't have to coerce him in any way: Theon is ready to support his sister as the leader of the ironborn. It's not just a great narrative progression for an oft-forgotten storyline; Yara is, by and large, the best Greyjoy leader we've seen on screen.

Daenerys Targaryen: Daenerys' incredible scheme to take power against the Dothraki actually begins with an important dismissal. Jorah and Daario find Daenerys in Vaes Dothrak and plan to help her escape in a cliché knight-in-shining-armor gesture, but she doesn't need their help to thwart the Dosh Khaleen.

She still goes to meet with them, and says that she would be best suited to take charge of the Dothraki. They quickly scoff at her remarks and — for her confidence and dismissal of their traditions — threaten to rape her, before she turns the tables (and torches) on them and sets the room ablaze.

Daenerys leaves unscathed, much to the awe of the Dothraki outside. It's her most powerful moment in the series since she left Astapor in flames with the help of her dragons, and she's back on the political map after that swift reversal of fortunes.

However, while "Book of the Stranger" was an excellent episode with feminist undertones, it doesn't mean Game of Thrones is instantly cured of its faults. This is the same show that has been oft-criticized for its depictions of sexual violence, and last season was its most indicting after Sansa was raped by Ramsay Bolton. But it's clear the political landscape of Westeros is changing.

These six women aside, other powerful women on the series include Ellaria Sand leading Dorne, Missandei speaking out in Meereen, and Arya slowly turning into an all-powerful assassin. Westeros has been in disarray for a while, with seemingly endless conflict over who will sit on the Iron Throne. Perhaps the Seven Kingdoms should take a page from Daenerys' book: break the wheel, by giving women the freedom to rule.