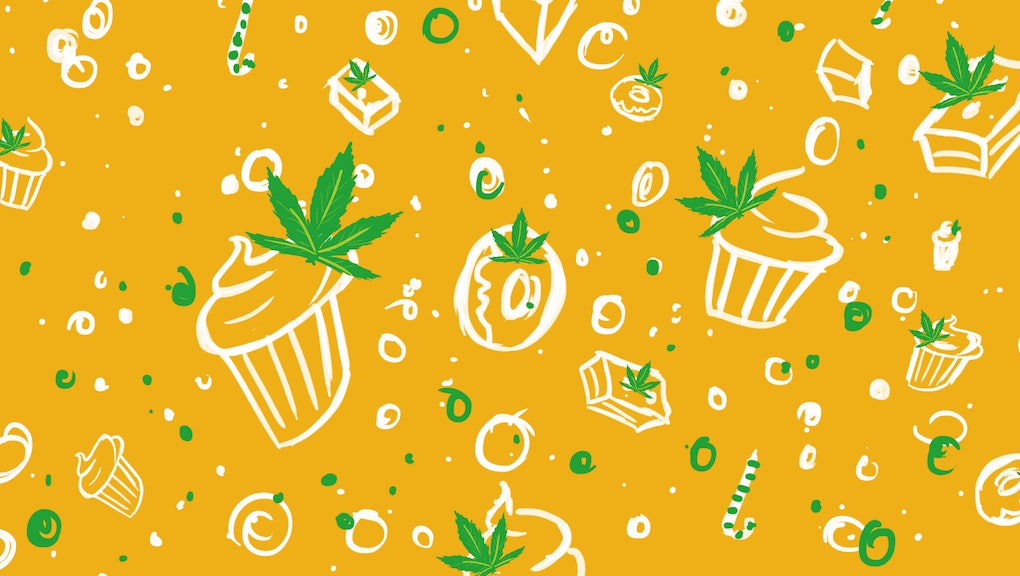 If the only experience you have with edibles is ingesting an entire pot brownie (first mistake) at age 16 and truly, truly believing you were going to die, you're not alone. Ahem.

But as you've gotten older, you've probably gotten wiser: You've either stayed away from pot-infused foods for good, or you've learned about portion control. If you're in the former camp, yet still a little turned on by the idea of dipping your toes back in the weedy waters, this little fact may be of interest: Cooking your own edibles is incredibly easy.

"It's fascinating to me because people think it's really complicated and scary and hard," Cannabis Kitchen Cookbook author Robyn Griggs Lawrence, said in an interview. "But it's really easy: You combine a fat and your ground cannabis and there you have it."

Edibles chefs may have special procedures they swear by — Lawrence said that many weed chefs want to attach a certain mystery to their art — but the basics are really quite simple.

Not such a heavy lift, huh? Once you make your weed-infused oil, it's possible to turn almost any recipe into a psychedelic dish. It's as easy as making one simple swap: Say you want to make brownies from a boxed mix. Swap in an infused oil for the one the recipe calls for, and there you have it: You made edibles.

Grinding the Mary Jane: No matter what method you use for infusing the oil (more on that below), the process begins by grinding buds. Lawrence said she has a dedicated coffee grinder for transforming the weed into a fine powder, but the process doesn't require one. A mortar and pestle work, as do whatever kooky techniques you may have developed as a teen (with some persistence, an Old Navy gift card can grate a bud just fine).

Weed-to-oil ratio: The amount of weed needed to infuse the oil depends on the desired potency, but a standard ratio is an ounce of weed for each cup of oil, Lawrence said. For butter, The Cannabist recommends using four sticks of butter for every ounce of marijuana.

Most recipes won't require an entire cup of fat, but leftovers can get saved for future edible endeavors. Lawrence makes a big batch, then freezes the leftovers in ice cube trays, which can last for at least a year. (She just thaws the cubes and get cooking when she's so inclined.)

If your head hurts, here's an online calculator that might help you better determine the proper measurements.

Methods for making the oil

In The Slow Cooker: Lawrence said slow cooking is her favorite way to concoct cannabis cooking oil. The two biggest benefits are that it's impossible for the weed to burn, and the oil becomes incredibly potent. The drawback is that the process takes a while, so it requires some planning. But Lawrence insisted the system is worth the wait, and even though it's time consuming, it requires very little work.

To make cannabis oil in your slow cooker, place the oil and cannabis in a jar. Fill the slow cooker with water halfway, and keep the device on low. Place the jar in the water and voila! Set it and forget it. "Six hours is probably the minimum to extract all that you want to from the cannabis," Lawrence said.

With A Dutch Oven: If you don't have a slow cooker, you can treat the oil and cannabis to a water bath in a dutch oven. Set the oven to 180 degrees Fahrenheit and place the oil mixture into an oven-safe jar. Then place the jar into a dutch oven that is halfway filled with water, cover and cook in the oven for at least six hours (the longer the better).

On The Stove: This is probably the most popular way to start the edible process, but it's also the most risky, Lawrence said. Warm your oil in a pan at "super, super low heat" and then add in the ground weed. Stir constantly for 20 minutes to ensure the cannabis doesn't burn. Your mixture won't be as strong as it will when made by the other methods, but you won't have to wait as long.

Once the mixture is ready

Strain out the weed. Once the oil and marijuana mixture have become one, the leftover plant pieces will need to be strained out. The process is quick and painless: Take a strainer — like the kind you'd use for spaghetti — and line it with cheesecloth. (It sounds like a fancy kitchen accessory, but it's just a porous piece of fabric you can buy at most major stores or online.) Pour your mixture into the lined strainer and allow it to drip into a bowl you place underneath the strainer. Once the oil stops dripping, roll the cheesecloth into a ball and squeeze out any remaining liquids to get every last drop.

Get cooking. Your imagination is the only limit when it comes to making edibles. You can add the infused butter or oil to recipes for funfetti cupcakes, banana bread, blueberry muffins, chocolate bundt cake — even salad dressings. Or if you want to keep it simple, you can just spread the weed butter on a golden piece of toast.

When it's hot out of the oven: No matter how good your edible dish may look and smell, it's important to keep portion control in mind. "Start with a piece [of brownie] the size of your thumb," Lawrence said. "You can always eat more." Lawrence said it could take more than an hour to feel the affects, and just because someone around you feels it first doesn't mean you won't. "It's no instant gratification."

The high people experience from ingesting marijuana is often much different from the high that occurs from smoking weed. Lawrence said the high is often stronger and longer lasting. "It's something you need to plan for," she said. You'll need at least four recreational hours after consumption, and be sure that you won't have to drive (or operate heavy machinery).

This high is less predictable than the kind that comes from smoking because "your body chemistry comes more into play," Lawrence said. The experience could be affected by whether you're eating on an empty stomach or whether you got enough sleep the night before.

This one's very important for food enthusiasts and hungry people everywhere: Since you'll already be cooking up a batch of weed-infused something, make another batch of of the item sans marijuana. This looking-out-for-your-future-self strategy will keep you from overeating the edible if the munchies hit: You'll have a clean version of whatever dish you baked to enjoy, without any psychedelic side effects. If this is too much effort, purchase something just as delicious before you eat the edibles. This way you won't be tempted to go HAM on an entire batch of pot brownies.

This article was originally published on May 25, 2016