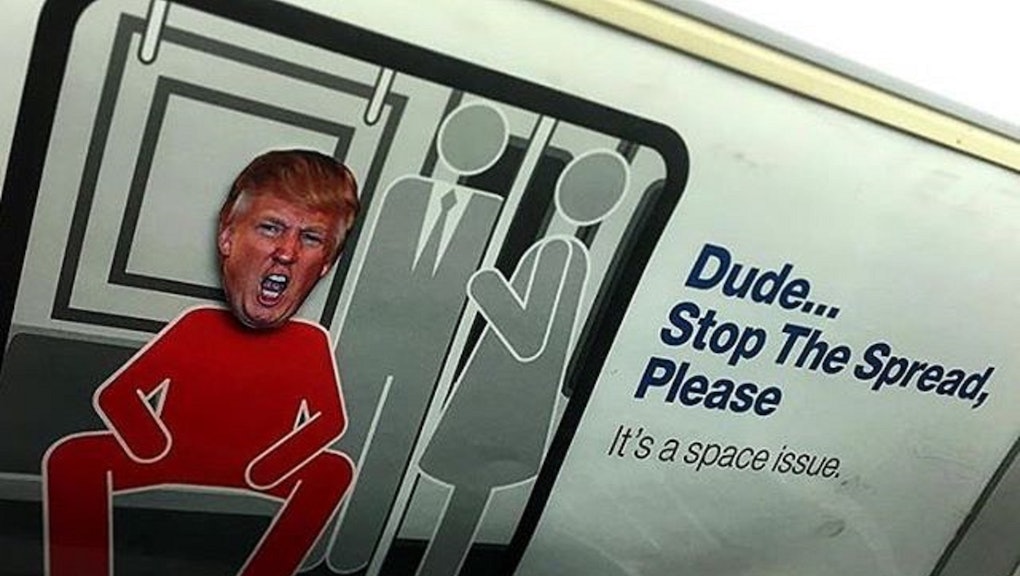 A group of street artists wants to publicly mock presumptive Republican presidential nominee Donald Trump — and they've decided to do it by putting stickers of the businessman's yelling face over the New York subway ads informing commuters of prohibited behavior and how to be a more courteous straphanger.

The result is some commuters have seen Trump as the archetypical Goofus harassing the Gallants of the metro, eagerly indulging in every subway sin imaginable from primping his hair to munching on a burger and fries while taking up two seats.

"We chose that image from a few options and just kinda lucked out," they added. "Trump is just an all around obnoxious guy, so that's kind of the message."

"Our objective is just making fun of Trump for being awful and belligerent," Major Bigtime wrote. "We're working on some more goofy 'street art' ideas we hope to post soon, so the goal is to keep making people laugh when they're out and about in the city."

New Yorkers are already broadly in on the anti-Trump effort. According to an average of polls kept by Real Clear Politics, Democratic front-runner Hillary Clinton has maintained a double-digit lead on the New York billionaire for months, with the current average standing at Clinton with 55.5% to Trump's 33.8%.

Read more: Obama Dragged Donald Trump at the White House Correspondents' Dinner and It Was Hillarious