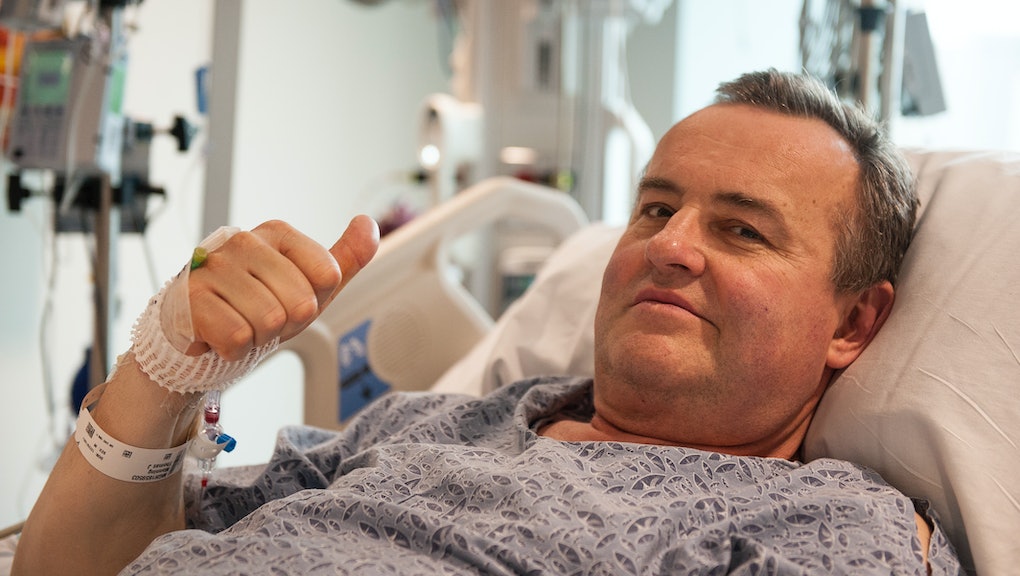 U.S. doctors have transplanted lungs, hearts, kidneys, livers — even faces. But surgeons at Massachusetts General Hospital made history this month when they completed the country's first penis transplant.

The patient, 64-year-old Thomas Manning, sustained "severe injuries" when equipment fell on him at work in 2012, the New York Times reported. While Manning was being treated at the hospital, doctors noticed a growth on his penis and diagnosed him with life-threatening penile cancer. Doctors removed "most of his penis," leaving him with "a stump about an inch long."

Manning had to sit down to pee and couldn't have intimate relationships with women, he told the Times. But a penis transplant wasn't possible at the time. It had been attempted only twice worldwide — and only once successfully, in South Africa. But Manning "kept my eye on the prize," he said.

After three and a half years of research, surgeons at MGH performed Manning's penis transplant earlier this month, the hospital announced today. Doctors are "cautiously optimistic" that it'll return the functions Manning lost in his 2012 amputation.

"We are delighted to have taken the first steps to help those patients who have suffered silently for far too long," Dr. Dicken Ko, one of the surgeons who led the procedure, said in a statement.

More than 1,300 men in the military sustained genitourinary injuries between 2001 and 2013.

How a penis transplant works

First, surgeons have to procure a donor penis matching the patient's skin tone and blood type.

"The penis donor must be fairly young and have very healthy blood vessels to prevent erectile dysfunction," Dr. Amy Friedman, medical director at LiveOnNY, said in an emailed statement on Monday. "As with any organ, if it didn't function in the donor, it won't function in the recipient."

Then, to perform the transplant, surgeons need to attach it to the patient's arteries, veins, nerves, skin and urethra.

It isn't an easy process. "The blood vessels that are attached to penis are quite small," Dr. Lee Zhao, an assistant professor of Urology at NYU Langone Medical Center who wasn't involved in Manning's penis transplant, said in a phone call Monday. He put it this way: If the artery to a kidney is 1 centimeter, the artery to a penis may only be 2 or 3 millimeters.

"The techniques to do some of the connections for those blood vessels and nerves have taken a long time to develop," Zhao said.

That's the goal. Manning's new penis will allow urine to pass through it, and doctors are "cautiously optimistic that sexual function will be restored," according to a fact sheet.

That may take time, according to Johns Hopkins Hospital, where a penis transplant program is also underway. Nerves grow at a rate of 1 millimeter per day — or 1 inch per month. "We anticipate that achieving function, including urinary and sexual functioning, could take between six to 12 months," its website says.

The procedure is similar to cases where patients have severed their own penises and need to have them reattached, Zhao said. In those situations, "patients are able to achieve erections."

As for ejaculation, "it occurs in male patients who do not have a penis," Zhao said. "That should not be affected." Like urine, the semen will flow through the reattached urethra.

Fathering children is possible, too — provided a patient's testes are still intact. In fact, the recipient of the world's first penis transplant conceived a child with his girlfriend last year, CNN reported.

Physically speaking, losing a penis isn't life-threatening, like heart failure. Are penis transplants worth a lifetime of immunosuppressant drugs, which come with a number of unpleasant side effects?

"Since there are alternative techniques for making a penis, you really have to weigh the risks and benefits of doing a penis transplant," Zhao said.

One alternative technique is constructing a "neophallus" — a new penis made from tissue from a patient's forearm or thigh. Patients with a neophallus require a penile prosthesis to achieve an erection, Zhao said. They don't need to take immunosuppressants, since their new organs come from their own bodies.

But in some cases — such as the wounded soldiers approved for penis transplants at Johns Hopkins — patients have lost too much tissue from their penises to construct a neophallus, according to Popular Science. If they want to restore their penises, transplantation is the only option.

Future transplants mean we'll need more donors. "Perhaps this will encourage additional people to understand the importance of organ donation in a much more personal way," Friedman, of LiveOnNY, said. "When people have empathy for others, they are more likely to donate."