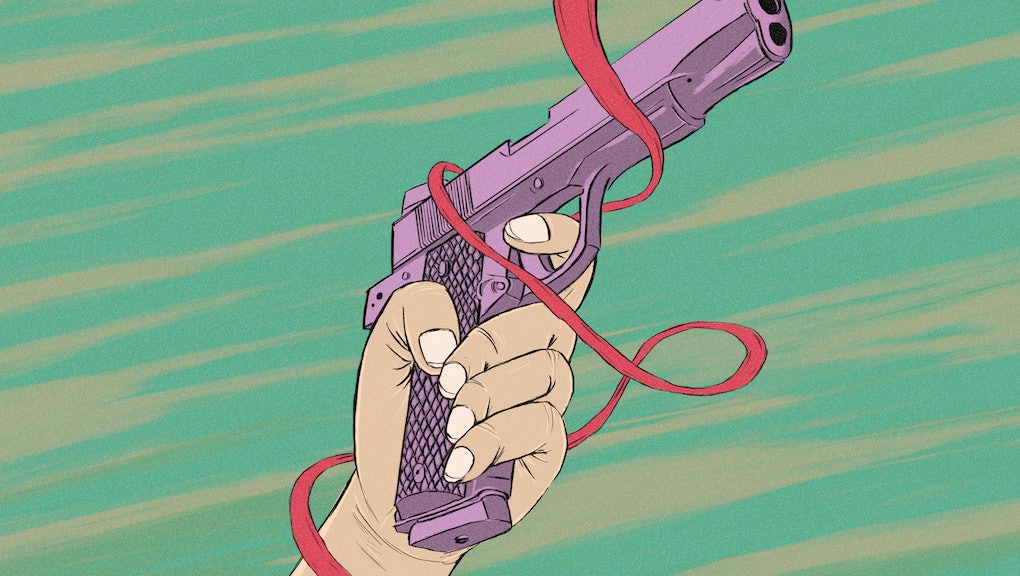 Could This One Gun Regulation Save Dozens of People From Being Shot by Police?

On April 28, Baltimore Police Commissioner Kevin Davis stood at a podium bearing the city's blue and gold police seal. In front of the dais, between Davis and the group of reporters gathered to hear him speak, officers had set up a table with two nearly identical guns: A semi-automatic firearm and a BB gun.

Which one is the fake? one reporter asked.

"Which do you think?" Davis replied. "Indicative of [the] tough job we have."

The day before, a 14-year-old black boy named Dedric Colvin had been walking through East Baltimore carrying a similar BB gun. Police mistook it for a firearm, chased him down and shot him in the leg.

Colvin survived the ordeal, but Commissioner Davis had a point: The BB gun Colvin was carrying looked identical to the firearm sitting beside it.

While federal law requires toy guns to have orange tips designating them as fake, many air guns — including pellet, paintball and BB guns — are exempt from the rule. Since 1988, the federal government has preached the same gospel: BB guns are not toy guns, and therefore don't require special coloring to label them as such.

The state of Maryland, for its part, currently has no laws regulating how imitation firearms should look.

Ultimately, the solution to police shooting unarmed victims is for officers to be less trigger-happy. But Colvin's case raises the question: Could making replica guns — a designation that covers all guns that don't use a chemical explosion to launch a projectile — prevent unnecessary police shootings? Would making air guns, say, neon green have prevented the deaths of Tamir Rice in Cleveland, Ohio, and John Crawford III, in Beavercreek, Ohio in 2014?

"The danger here is a police officer is making a life-or-death decision when he may actually not be in danger," Marty Mack, executive deputy attorney general for regional offices in New York, told Mic. "Anytime we can make that [decision] easier, we'll do it."

"Anything we can do to improve and enhance safety for individuals, especially for children and police officers, we should do," Mack said.

But the issue is complicated. For example, New York's stringent laws do not cover BB guns. This muddy set of designations has fueled a years-long fight between two factions: those who think certain air guns should be regulated more like their toy counterparts, and those who consider them "real guns" and should be treated as such.

On the one hand, it's hard to argue that BB guns are not the same as a true firearm. On the other, they do have the capacity to cause serious injury, and even in some cases, death.

These fatality numbers include killings by police officers who mistook replica guns for firearms in many recent cases. Accurate data about such deaths is hard to come by, in part because states report data on police shootings to the FBI on a voluntary basis. But according to data collected by the Guardian, at least 28 people were killed by police while holding BB or pellet guns in 2015.

Such incidents have gained special attention in connection to the Black Lives Matter protest movement. In July 2014, John Crawford III, a 23-year-old black man, was shot and killed by police in Beaver Creek, Ohio, while holding a toy rifle inside a Walmart store. Six months later, 12-year-old Tamir Rice — also black — was killed by police in Cleveland while holding an airsoft gun the officers thought was real.

Had Dedric Colvin died in Baltimore in April, he'd have been the latest young person added to this list.

Joe Murfin, vice president of public relations for air-gun manufacturer Daisy, had no idea his company made the BB gun that landed Colvin in a hospital. The day after the shooting, the Baltimore Sun identified the teen's BB gun as a PowerLine 340, one of Daisy's signature products.

It turns out real-looking replica firearms have numerous practical functions. According to Murfin, they're often used to train the military and police officers, to mimic the weight and feel of real firearms without the danger. Other people training to get concealed carry licenses also use BB guns to get used to what carrying a gun feels like.

At the same time, these guns can be lethal in their own right. One 2004 study from the American Society of Pediatrics found that 39 people, mostly children under 15, died after being shot with air guns between 1990 and 2000.

"There are such things as toy guns," Murfin said. "But [BB guns] are guns. They project a steel or lead projectile down a barrel, the misuse of which could cause injury or death."

In lieu of a strong federal stance, states have come up with their own ways to regulate replica firearm sales and production. These laws aren't limited to how firearms are required to look — orange tip, no metallics, et cetera — but whether their possession, sale and use are legal at all.

The scope and severity of these laws vary nationwide. Maryland, for instance, has no laws regulating imitation firearms at all. New York requires special markings on toy guns. A court in Minnesota recently ruled that a BB gun is the same as a firearm, and therefore subject to the same possession laws. Other states, like California, fall somewhere along this spectrum.

But the states with no air gun laws at all have suffered high-profile consequences. With the Dedric Colvin case, Maryland is one of them. Ohio — where Crawford and Rice were shot — is another. It's this legal vacuum that allows police officers to respond violently to replica guns, then shrug their shoulders and say, "What was I supposed to do?"

This is not to say folks haven't tried to pass laws that more strictly regulate how replica guns are made, sold and used. Lawmakers in both Ohio and Maryland have recently considered legislation to criminalize toy guns and air guns, in order to eliminate the capacity for police error altogether. In Ohio, it hasn't gone much further than talk, but Maryland legislators recently introduced House Bill 879, which would have imposed criminal penalties on selling, using, possessing or transferring an "imitation firearm."

The bill went nowhere and Maryland is back where they started.

But perhaps an answer as simple as changing the coloring on a gun is just that — too simple. After all, John Crawford III was in a store holding a toy gun that was sold in that store, and got shot by police anyway. The law has never been a fail-safe.

Still, a small shift in how replica firearms are required to look could make a difference for the handful of people impacted by these tragedies — perhaps even preventing them from being harmed by police in the first place. Consensus on how to solve this has been hard to come by, but one idea is having a third category — neither a firearm nor a toy gun, but something in between and visually designated as such?

"What the design would be, to have a third category [besides just 'toys guns' and 'real guns'], I think would be pretty difficult to do, given the fact that some air guns can do harm," Marty Mack said of this possible designation for BB and pellet guns. "If someone came up with a creative solution, people would listen. But I think it'd be very difficult."