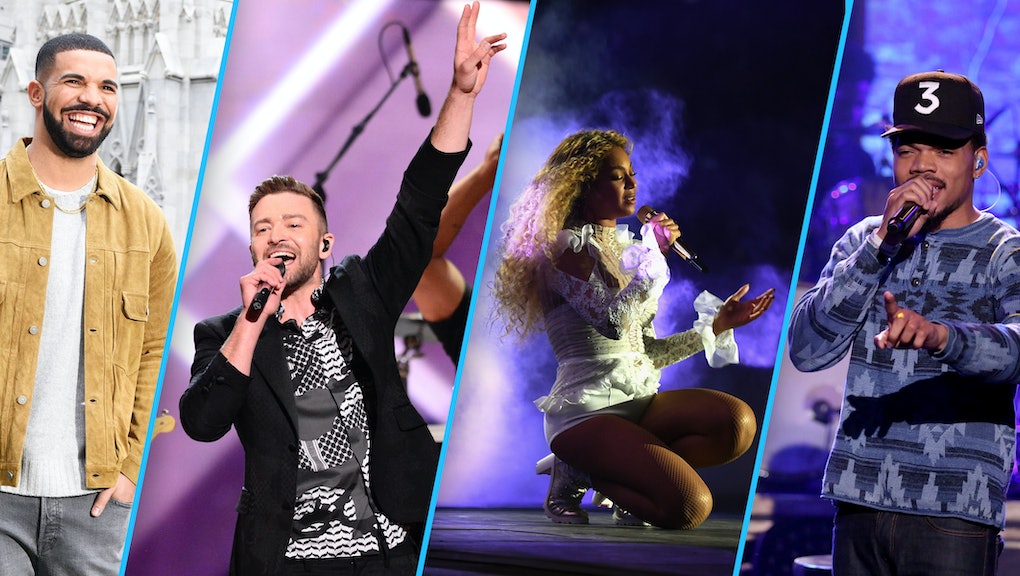 The song of the summer is a relatively arbitrary title — like the Grammy's best new artist or a people's choice award — but its still one the world's pop artists will scramble over one another to acquire. Billboard designates an "official" song every year, cobbling together the season's radio, streaming and sales data to find the one inescapable song that would soundtrack a montage of our summer memories.

When all is said and done, their results are hard to argue with. Omi's "Cheerleader" took the prize in 2015; Iggy Azalea's "Fancy" claimed the crown in 2014, and Robin Thicke's problematic "Blurred Lines" knew 2013 actually did want it.

These songs were everywhere. Interestingly, one thing these songs all share, besides a chipper beat and lighthearted lyrics, is they all came out way before summer heat ever hit.

A 2015 analysis of 30 years of Billboard's songs of the summer countdown revealed that 36% came out in April or earlier. Another 36% came out in May. We're still a month away from summer, but we're already listening to the songs that are going to dominate it. Thankfully, we've got a much better crop than last year.

"One Dance" by Drake

By far the poppiest and most club-ready song off Drake's Views, it's been singled out immediately out of the album's 20 tracks. It shot to No. 1 shortly after the album's release, sitting there for a week before being dethroned by summer pop guru, Justin Timberlake.

Top to bottom, Timberlake's "Can't Stop the Feeling" is engineered to be the perfect summer jam. It has a bouncy instrumental, simple lyrics, easily danceable beat, and as of Tuesday, a fun, dance-y music video. Expect to be hearing a lot more of this one.

The Future rip-off that charts higher than Future, "Panda" may be a sleeper hit this summer. The song came out in December, but summited the Billboard Hot 100 during the week of May 7. It's following a similar course to Omi's "Cheerleader" — both songs were/are heavily derivative of standard radio fare, coming from newcomers. "Cheerleader" climbed up and down the charts until it took 2015 for itself; "Panda" may be right behind it.

One of the most intriguing things about Beyoncé's Lemonade is it doesn't have any obvious radio winners, rare for a pop album of that caliber. "Sorry" is probably the closest she gets to her maximal hits of old. Despite its slow tempo and staid dynamics, it surprisingly slays on the dance floor.

"This Is What You Came For" Calvin Harris featuring Rihanna

Rihanna's Anti and Beyoncé's Lemonade fulfill similar roles for their artists: They're statement albums, not blockbusters. They're reaching for prestige, not radio spins. Rihanna's doing that on the side. "This Is What You Came For" is a spiritual sequel to Rihanna's "We Found Love," also written and produced by Calvin Harris. Their new collaboration hasn't gotten huge traction yet, but with a captivating video, it could see itself getting some serious play this summer.

The two high-profile features on Chance the Rapper's "No Problem" may help the song land a nice spot on the Billboard charts when they update next week. The fun and emboldening chorus just screams summer freedom. It's the summer anthem we deserve, but probably won't get with people like Timberlake and Adele on the scene.

"Send My Love (To Your New Lover)" by Adele

Speaking of Adele, she's been quietly waiting to release 25's most recent single until we were right in the summer jam sweet spot. The album's sunniest number, "Send My Love (To Your New Lover)," comes straight out of elusive hitmaker Max Martin's lab. It's a strong enough track to start the Adele hype trailing rolling all over again when she premieres the song's video Sunday at the Billboard Music Awards.