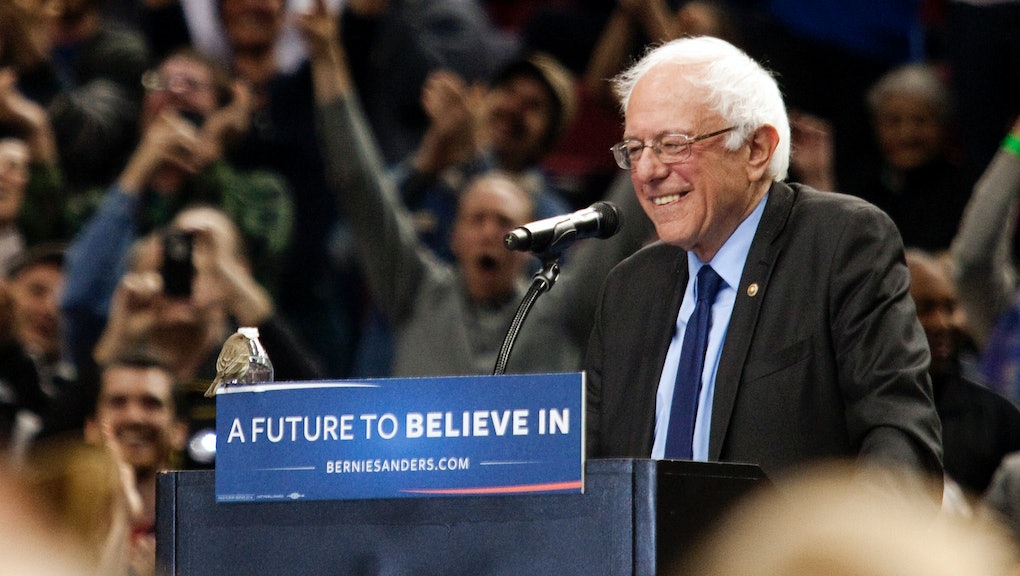 Bernie Sanders defeated Hillary Clinton in the Oregon Democratic primary on Tuesday, notching a victory in a state that was tailor-made for his progressive-themed campaign.

The Associated Press called the race for the Vermont senator at 11:37 p.m. Eastern, a little more than half an hour after polls closed:

No Bernout just yet: Sanders' triumph in the Beaver State follows victories in Indiana and West Virginia this month, though his likely defeat in the Kentucky primary on Tuesday dashed hopes of a May winning streak.

At any rate, Sanders' recent wins don't alter Clinton's forbidding lead in the race for the delegates, but they underscore the frontrunner's persistent vulnerabilities heading into her general election battle with presumptive Republican nominee Donald Trump.

With a restive left wing disillusioned by Clinton's ties to the financial industry and her hawkish foreign policy record, the former secretary of state may struggle to unite supporters of Sanders' anti-establishment bid behind her campaign. Not only is there a risk that many Sanders backers will stay home or vote for protest candidates in November, but Trump has begun courting Sanders supporters with a populist-toned pitch.

For now, though, Clinton is still on track to make it to the starting gate. Heading into Tuesday, Clinton had won 2,240 delegates to Sanders' 1,473, meaning she only needed to win about 14% of the remaining delegates up for grabs to reach the 2,383 required to clinch the Democratic nod.

How Bernie won: Undaunted, Sanders came to Oregon with high hopes of scoring a victory that would bolster his left-wing movement's position heading into the Democratic National Convention in July.

The state's progressive politics and demographic profile proved an excellent fit for Sanders, who aims to foment a "political revolution" against what he calls "the billionaire class." That message hasn't penetrated as much as Sanders needed it to in most large, demographically diverse states. But with a Democratic electorate that's about 87% white, according to data from FiveThirtyEight, Oregon's voter pool was more Sanders-friendly.

Oregon is also home to Jeff Merkley, the only United States senator to publicly endorse Sanders.

Clinton all but conceded that the fundamentals of the state favored Sanders, spending few resources in the state ahead of the vote and devoting most of her attention to the Kentucky primary.

The Democrats' next contests will not come for nearly three weeks. Democrats will caucus in the Virgin Islands on June 4, while Puerto Rican Democrats will vote in their primary the next day.

The last major prize is California's June 7 primary, where 172 pledged delegates are at stake and polls show Clinton leading Sanders by about 10 percentage points.